'It's disgusting, I still feel them crawling' | Hundreds of baby ticks ambush man out walking

Baby ticks known as 'seed ticks' latched on to Ryan Root as he was walking through Northeast Park in Guilford County, North Carolina, on the way to fish. 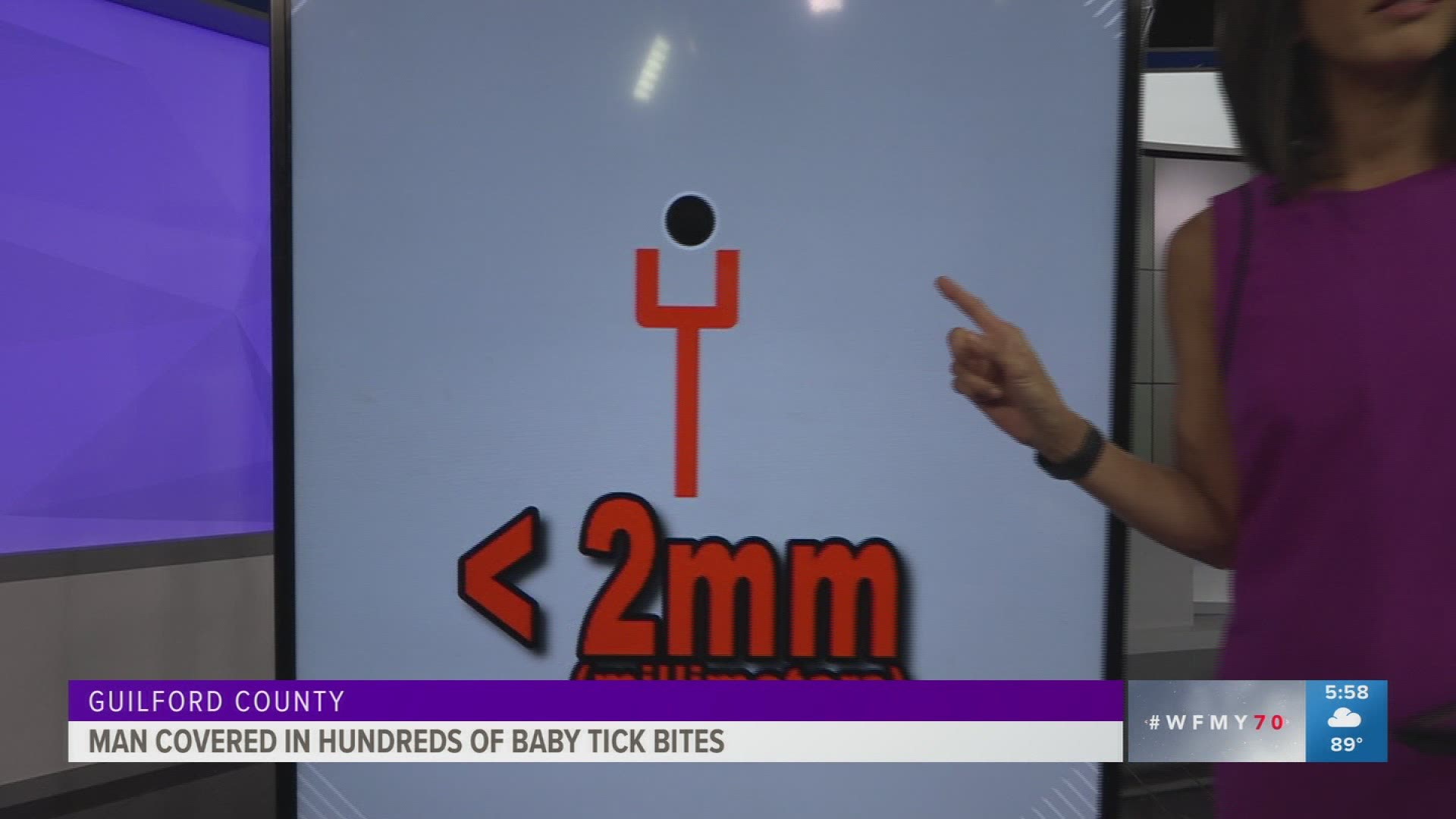 GUILFORD COUNTY, N.C. — Ryan Root of Reidsville says he was walking through Northeast Park in Guilford County, as he normally does, on his way to fish with a buddy. But about 15 minutes into their fishing trip, they felt some creepy crawlers.

"I was like oh my God I can't believe these tiny little things are ticks," Root said. "Then when you see them crawling up your leg and you just feel it," He continued. "I still can't sleep well I feel them crawling on me all the time it's horrible, they're disgusting."

He says he rushed home, covered himself in Vaseline, and his girlfriend helped pick them off with tweezers. Hundreds of them, or more. "As many bites as I have right now, a thousand for sure." Root noticed they were much smaller than your average tick, and even mistook them for freckles at first. Then he thought..

RELATED: Why Are There So Many Ticks These Days?

"You would normally think of a big tick crawling on you, you don't look at these small things and think 'I have a tick on me,' and that's problematic sometimes," Frank Fowler with McNeely Pest Control said.

Root went to the Emergency Room because of the concerning bites, and subsequent itching and irritation.

"I ended up going to urgent care and they checked me over and said more than likely, it was a tick nest I had gotten into."

Fowler said Root was bitten by seed ticks. He said a seed tick is just another way of saying baby tick.

RELATED: How Quickly Can an Attached Tick Make You Sick?

Do You Know What A Seed Tick Bite Looks Like? Check It Out!

"The larvae and the nymph stage are what we call seed ticks."

These bites are not just a horrifying image, they're a health concern. Fowler says seed ticks are more dangerous than adult ticks.

"You're the most vulnerable to disease transmission during that stage."

Tick bites can lead to some serious illnesses, including Lyme Disease.

The Guilford County Department of Public Health says the county has had 8 confirmed Lyme Disease cases since 2016.

Tammy Koonce with the Health Department says there are steps you can take to prevent a tick bite.

"Wearing long sleeves, long pants and also it's a good idea to wear light colored clothing so you can actually see the ticks when they get on your clothes."

"Look specifically at the skin folds, the areas you don't really think to look, like your belly button and behind your knees, behind your ears."

Koonce said to be sure to check your children and pets as well.

E-mail Newsletter Signup Form | Greensboro, North Carolina | wfmynews2.com
News to know on the go! WFMY's Let's Get 2 It delivers stories from Greensboro, N.C. and beyond to keep you informed, make you think, smile, LOL, or maybe even cry.