No penalty for N.C. nail salon after deer-butchering photo surfaces

An investigation by the North Carolina Board of Cosmetic Art Examiners reveals there are no regulations that address dead wildlife in salons. 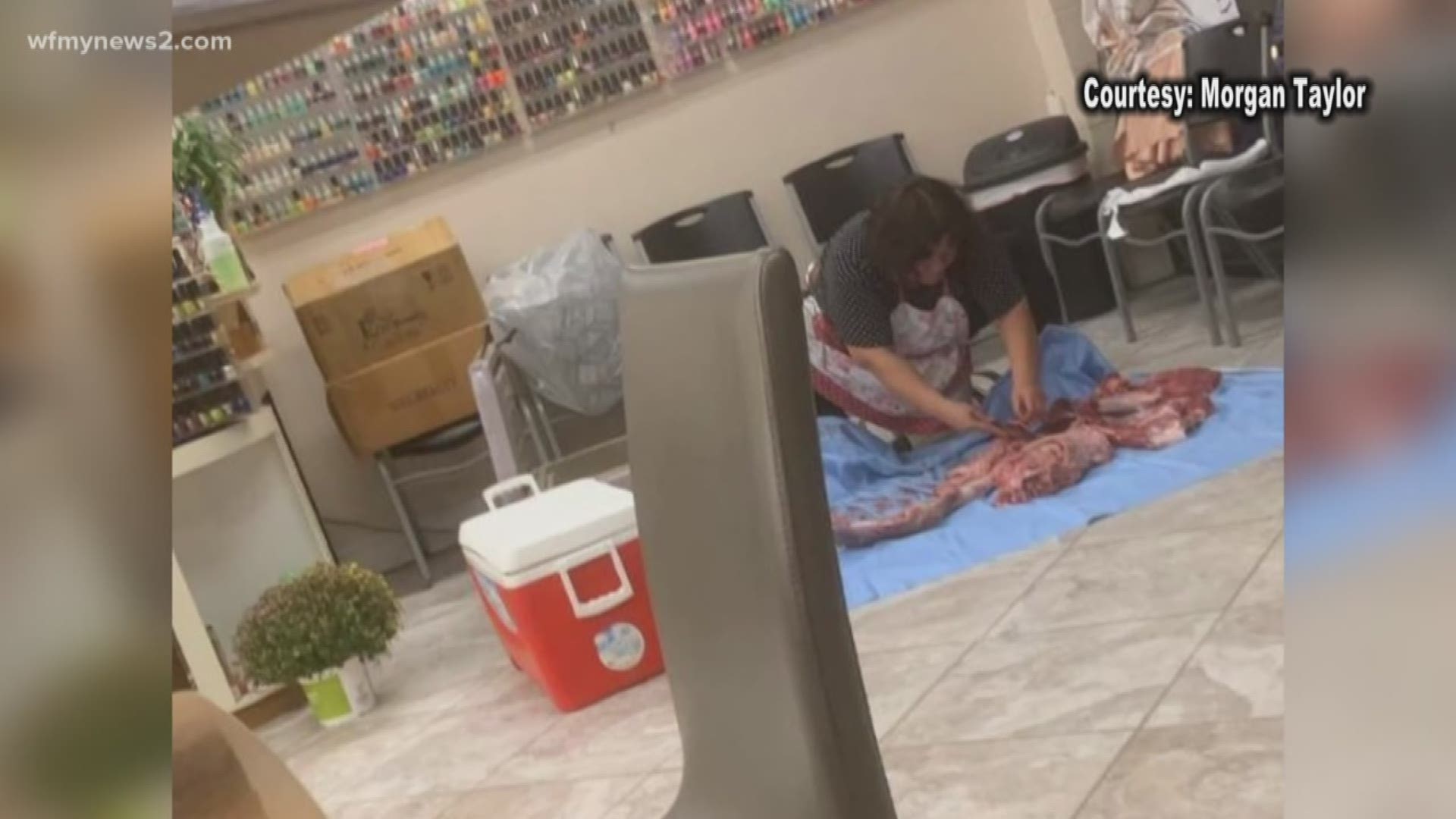 HIGH POINT, N.C. — An update to a viral story WFMY News 2 brought you weeks ago.

A picture taken by a Diamond Nails customer showed a dead deer being cut up in the middle of the High Point salon on some tarp.

Customer Morgan Taylor reported the incident to the North Carolina Board of Cosmetic Art Examiners, and an investigation was conducted.

Lynda Elliot, the Executive Director of the Board sent WFMY News 2 the following statement on the investigation, that's now closed:

An investigation was conducted regarding raw deer meat being cut during business hours 10-8 pm. At the time of the incident the salon was closed and the last customer was checking out. The salon clock in the reception area when the picture was taken indicates it was 8:05.

No penalty was issued to the salon as the Board does not have any regulations that address dead wildlife.

WFMY News 2's Jess Winters called Elliot for further explanation. She said the incident was a 'bad lapse of judgement' but didn't present a health risk. Elliot added she believes this was a one-time thing and the salon learned its lesson.

The North Carolina Wildlife Commission also investigated to make sure there wasn't any illegal meat packaging going on, and concluded there wasn't.

Taylor captured the picture while at the salon getting a manicure & pedicure.

When News 2's Jess Winters originally interviewed Taylor, she said there was a lot of confusion as to whether the salon was open or closed when the butchering began. She said it started when the salon was open, but persisted after-hours. She said 4 other customers were still being worked on when the deer was brought it.

Winters reached out to Taylor for her reaction on the Board's findings. Taylor said she was surprised but believes the salon will now never do this again.

"I asked them what it was, because just seeing them unload flesh and bones was a little bit shocking," Taylor said. "They said it was deer meat and they were splitting it up between the workers to take home."

Taylor said she never wanted anyone to get fired, but believed a thorough investigation was necessary for health purposes.

"I don’t hope they lose their jobs or anything that’s not why I did it, but people can get sick from this," Taylor continued. "They have an 'A' as their sanitation rating and they shouldn't."

Stay connected to 24/7 to breaking news, local news and weather.

Other stories of interest: