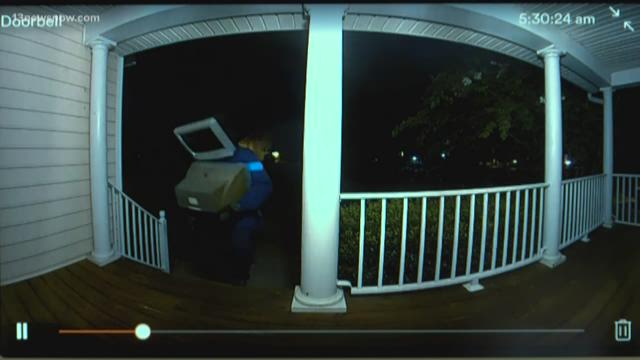 Dozens of people in a central Virginia neighborhood woke up to an odd surprise over the weekend: dozens of old-school, CRT television sets on their front lawns!

Residents in Henrico County's Hampshire community are now left wondering what and who was behind the seemingly-random act.

Some homeowner cameras caught the individuals in the act, but video surveillance shows the suspects in jumpsuits and wearing TVs over their heads.

Henrico Police said they are unsure how many people are involved, but more than 50 television sets were left on porches.

“The most relevant code we came across is illegal dumping,” said Henrico Lt. Matt Pecka. “Leaving something unwanted on public or private property.”

Members of the county’s Solid Waste Department spent Sunday morning removing the unwanted televisions from the area. The TVs were removed at no cost, police said.

This isn't the first time a Richmond-area neighborhood has woken up to find random TVs on their front porches.  The Richmond Times-Dispatch reports a similar incident happened last year, when 20 TV sets were dropped off in a Glen Allen neighborhood.

Lt. Pecka said that while the incidents seem isolated and "there’s no public threat to safety."

Pecka said the TVs will most likely be recycled, but also told the Times-Dispatch that "a couple of residents indicated they would hold onto the TVs for now."