After 30 years, Tides Davis remembers being in movie "Bull Durham" 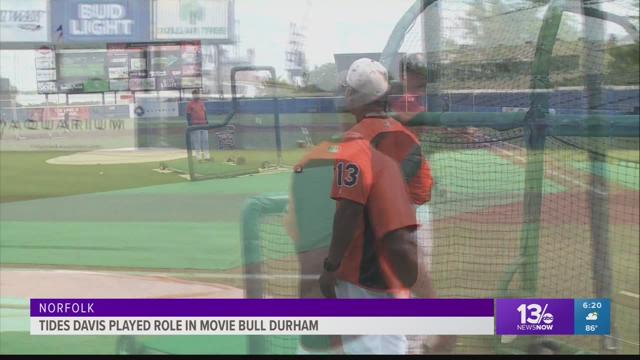 NORFOLK, Va.- Last month was the 30th anniversary of a classic baseball movie "Bull Durham". The film has a special place in the heart of Norfolk Tides hitting coach, Butch Davis. Not only was it shot near his hometown of Garner, North Carolina, he played an extra in it. "I didn't know what to expect", he said. It was on the advice from future major league manager, Grady Little, who knew Davis, to look into it. "They made us feel real comfortable".

The now 59 year old wound playing a minor role. If you look close enough, he's in several scenes. The biggest coming at the pitcher's mound where Kevin Costner ("Crash Davis) and Tim Robbins ("Nuke Laloosh) and Robert Wuhl (Larry Hockett) were among several players and coaches gathered. Davis is the one that's second from the right. Tides manager, Ron Johnson was surprised to find out Davis was in the film, and the two were former teammates. "Butch started telling me about it", he said. "It was awesome. He had a great time".