Duke basketball head coach Mike Krzyzewski spoke about his decision to retire after next season. 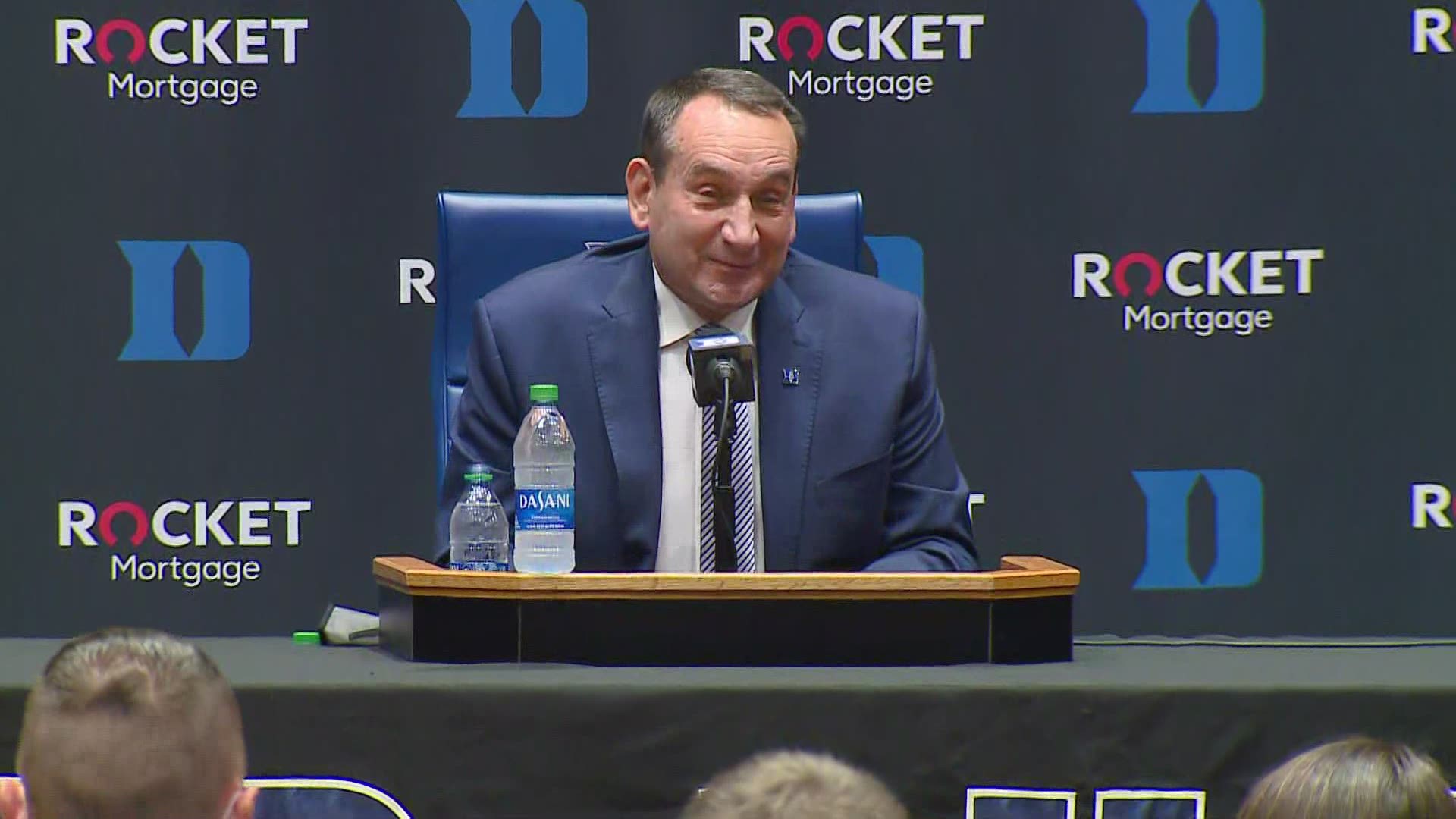 DURHAM, N.C. — It's the end of an era for Duke Basketball. Head coach Mike Krzyzewski will retire at the end of the 2021-22 season.

Krzyzewski spoke publicly about his retirement decision for the first time on Thursday.

Krzyzewski joined the Blue Devils as the head coach back in 1980 and has gone on to cement a legacy as a college basketball giant. He led the team to five national championships (1991, 1992, 2001, 2010, and 2015) and 12 Final Fours. He holds the record for the most wins of any college basketball coach.

Those accolades, Krzyzewski said, came with belief from the people who surrounded him.

"In your darkest hours, it’s not just about opportunity, it’s about people believing in you," he said.

“Mickie [my wife] and I have decided the journey’s going to be over in a year. And we’re going to go after it as hard as we can," Krzyzewski.

“I want this to be as good a basketball team as we’ve had in 46 years," he continued.

Coach K even had a message for the students.

Krzyzewski released a statement on his upcoming retirement.

"My family and I view today as a celebration," Krzyzewski said. "Our time at both West Point and Duke has been beyond amazing and we are thankful and honored to have led two college programs at world-class institutions for more than four decades. That, coupled with 11 unforgettable years as the United States National Team coach, has resulted in a remarkable journey. Certainly, I have been blessed to coach some of the finest young men and greatest players in basketball history as a direct result of these unique opportunities. For us, there is no greater joy than being part of our players' respective endeavors through basketball, and more importantly, their lives off the court. Our family is eternally grateful to everyone who contributed to our career for the past 46 years. So, to the countless members of our extended family, thank you very much."

"I can say without hesitation that Mike Krzyzewski is the greatest coach in the history of men's college basketball," Price said. "This is clearly demonstrated by his tremendous success at Duke — 1,170 career wins, five national championships, 15 ACC tournaments and 12 ACC regular-season titles — and his service to our country as the head coach of USA Basketball. But the true measure of his excellence is more personal. It is in his resolute commitment to integrity, fairness, and inclusion; in his transformational impact on collegiate athletics and the Durham community; in the joy, generosity, and inspiration he has brought to countless fans; and in his role as guide and teacher of thousands of players, coaches, and staff at Duke and beyond. Mike, Mickie and the entire Krzyzewski family have been devoted to Duke for more than 40 years, and we are so grateful that relationship will continue for a long time to come."

"Simply put, Mike Krzyzewski's legacy – never to be repeated again – is truly mindboggling," said White. "To suggest that Mike has more than earned the 'GOAT' mantle within the coaching community, both domestically and globally, is perhaps the greatest understatement of all time. Well beyond all the banners, hardware, titles, awards, honors, etc., Mike will long be best remembered, if not deeply respected and admired, for his unabashed love and utter devotion to his players. Again, the consummate teacher, coach, and mentor, coupled with his highly unique curriculum around life lessons and service will surely live at the pinnacle level of his chosen profession in perpetuity."

“Mike Krzyzewski continues to be a tremendous ambassador for the sport of basketball. What he means to the countless players he has coached, both collegiately and professionally, is simply immeasurable. His impact over the past five-plus decades is beyond commendable, and we look forward to celebrating and honoring both him and Mickie during their final year. As the transition is made, we welcome Jon Scheyer to the incredible head coaching ranks of ACC Basketball.”