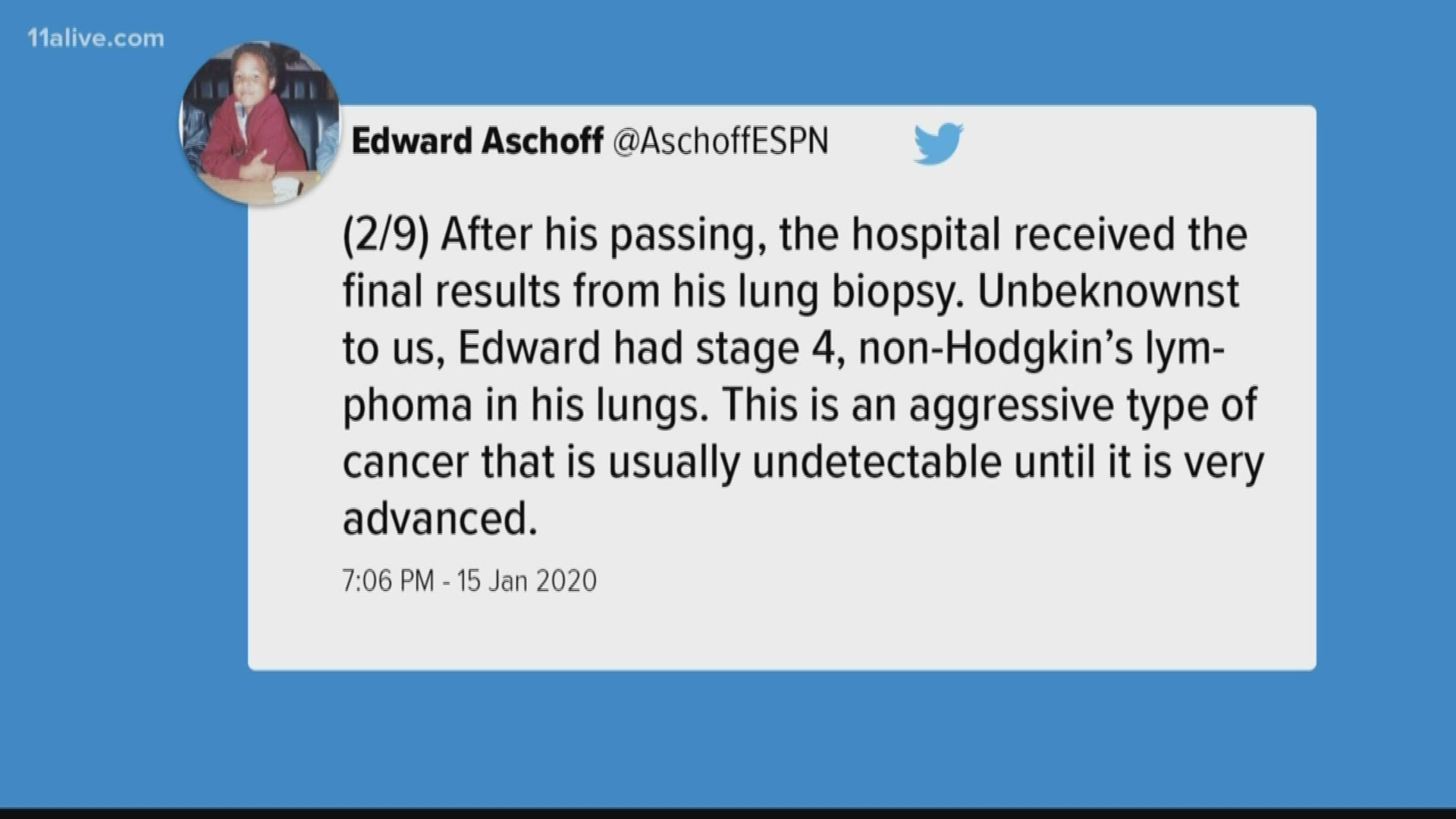 ATLANTA — Biopsy results may finally have offered some closure to the family and fiancée  of an ESPN reporter with Atlanta ties who died on Christmas Eve.

Using Edward Aschoff's own Twitter account to provide the update, his fiancée Katy Berteau provided an update to the search for answers in how the 34-year-old reporter seemingly fell gravely ill so suddenly. And the results suggest the reason behind it may not have been so sudden after all.

"Unbeknownst to us, Edward had stage 4, non-Hodgkin’s lymphoma in his lungs," Berteau wrote. "This is an aggressive type of cancer that is usually undetectable until it is very advanced."

Berteau previously said that doctors suspected pneumonia when Aschoff was first admitted to the hospital. But when his condition worsened and didn't respond to treatment, he was given a new "presumed diagnosis" of HLH (hemophagocytic lymphohistiocytosis) which is an unregulated over-activation of the immune system that causes it to attack itself and other healthy tissues.

However, the new find doesn't exclude either of Aschoff's previous diagnoses, Berteau said.

"Both pneumonia and non-Hodgkins lymphoma can trigger HLH in the body and that is seemingly what happened with Edward," she said. "All of this combined is what led to his very rapid decline those last few days, and ultimately his passing."

Aschoff died within three minutes of being admitted to the intensive care unit.

Looking back at the last month, Berteau wrote that she hopes knowing more helps others who cared about the young and promising reporter cope with his loss.

RELATED: What is HLH, and what role did it play in the death of a healthy 34-year-old ESPN reporter?

"I hope this information helps people in dealing with this tragedy," she wrote. "It has helped me knowing that his passing was inevitable, and I’m at least grateful he didn’t have to go through the painful treatment and drawn out process of battling the disease."

She also thanked the social media community for supporting her and Aschoff's family through the weeks that followed his death.

Since his death, the University of Florida's School of Journalism and Communications has begun setting up a scholarship fund in Aschoff's memory.

"He loved mentoring and sharing his advice for up-and-coming journalists and reporters," Berteau wrote.

She added that those who wish to donate to the fund can make them out to "U.F. Foundation" and send them to P.O. Box 14425, Gainesville, FL, 32604 with an attention line reading "Gift processing."

Donors should include "Edward Aschoff Memorial Fund" in the memo area.

She vanished right near the local high school; then she was sold for sex

Sophie Speaks: How a Georgia mother allowed her boyfriend to impregnate her 10-year-old