Malachi Imoh was ready, and the true freshman rushed for 137 yards and three touchdowns in W&M's 31-10 win at Zable Stadium. 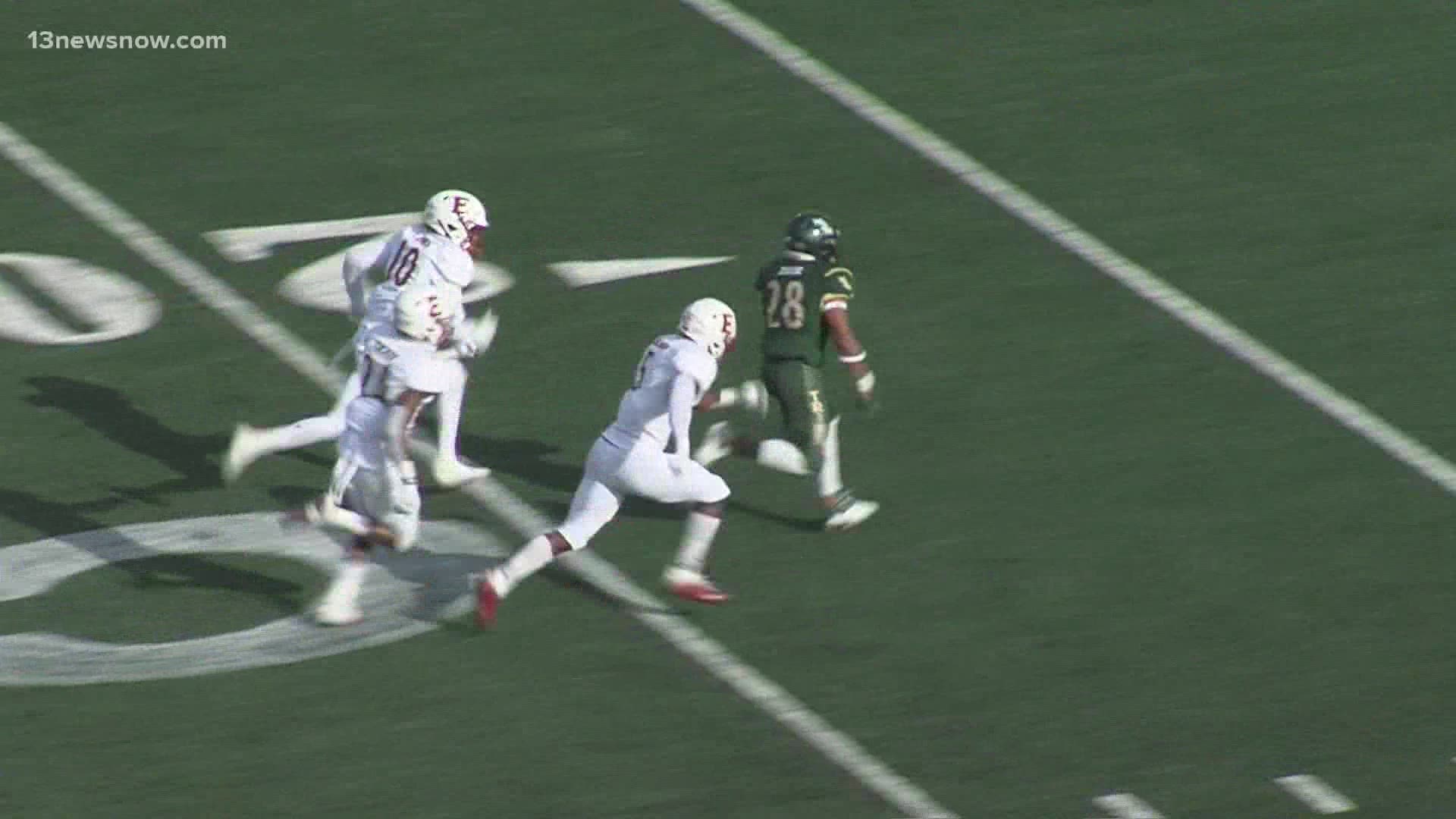 WILLIAMSBURG, Va. — In its previous game, two weeks ago at Richmond, William & Mary averaged only 2.4 yards per rushing attempt. A big part of the reason was that two starters on the offensive line were unable to play.

Saturday afternoon against Elon, the Tribe was missing its first- and second-string running backs. But Malachi Imoh was ready, and the true freshman rushed for 137 yards and three touchdowns in W&M's 31-10 win at Zable Stadium.

Malachi Imoh breaks loose for a 65-yd TD run! W&M on the board first!

The Tribe gained 242 yards on the ground, more than three times its total at Richmond, on 42 attempts. In addition to Imoh, quarterback Hollis Mathis ran for 69 yards on 14 carries. Sophomore back Elijah Burns finished with 33 yards on a team-leading 15 attempts.

With Owen Wright and Donavyn Lester unable to play, those three carried the load. "Both of them are unavailable right now because of certain issues going on," W&M coach Mike London said. "We hope to get them back and we hope to see the improvement that we need in order to get guys like Malachi Imoh and Elijah Burns opportunities.

"Today, Imoh showed as a true freshman that can be special. He made some of those jump cuts … and when he gets out in the open field, not too many people can catch him. Elijah Burns also did a good job of stepping up."

On his third carry of the afternoon, Imoh took a simple handoff to the left side. He made a cut just past the line of scrimmage, scooted toward the numbers on the left sideline, and went untouched the rest of the way for a 65-yard touchdown to put the Tribe ahead 7-0.

After the Phoenix cut the gap with a field goal, Imoh struck again. He went wide left but cut back inside. He outraced the linebackers and then the safeties for a 38-yard touchdown, which made it 14-3 with 9:07 left in the second quarter. At halftime, Imoh had 129 yards on nine carries.

Imoh had only one rushing attempt in the second half, but it was a 2-yard touchdown with 3:32 remaining. Burns, who as a freshman in 2019 carried four times for 25 yards, fumbled on his second carry Saturday. He had better moments after that, including a 48-yard run in the third quarter that was nullified by a holding penalty.

And there was Mathis, whose legs are always a weapon. Before Imoh's second touchdown, Mathis extended the drive with an 8-yard run on third-and-7 and a 7-yard run on fourth-and-2. He also had a 30-yard run that set up Ethan Chang's 28-yard field goal.

"With the ability to do it with your arm and legs, and he made some accurate throws today, you see the maturation of a quarterback who is getting better," London said.

Missing linebacker Trey Watkins, who had a career-high 12 tackles in the opener, the Tribe held Elon to 201 total yards for an average of 3.2 a play. Quarterbacks JR Martin and Justin Allen were a combined 16-of-34 for 142 yards.

Three different W&M linemen — Carl Fowler, Thomas Creed, and Nate Lynn — batted down a pass. Twice the Phoenix started drives on W&M's side of the field after turnovers. Neither time was Elon able to cash in. Its only touchdown came with 7:18 remaining in the game.

"I thought defensively, we played really, really well," London said. "There were some tough situations with turnovers, but they responded with tough play. We got after their quarterbacks."

The Tribe went 7-of-13 in third- and fourth-down situations. Elon was 5-of-16. Not all was perfect. William & Mary lost three fumbles, two coming on center-quarterback exchanges. The Tribe also was penalized 11 times for 108 yards.

"There were a lot of good things that happened and a lot of improvement," London said. "But we need to continue working on some of the things that can cause some issues."