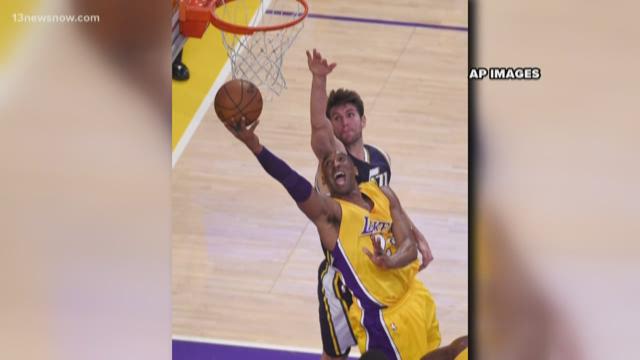 NORFOLK, Va. — Kobe Bryant passed away early Sunday morning in a helicopter crash near Calabasas. His daughter Gianna also died in the crash.

Kobe Bryant was invincible. We'd seen him beaten, but never defeated. We'd seen him achieve things beyond comprehension, against insurmountable odds. And all the while, publicly at least, we got to know him. We watched him grow from a teenager into a man. A man who was passionate, determined, intelligent, personable, kind and curios. Curious about basketball sure, but ever more so about our world and the people in it. Curious about life, a life he gave everything he had for the short time he was here. Be it as a husband to Vanessa Bryant, or a father to 17 year old Natalia, 3 year old Bianka, or 7th month old Capri. Then of course there's 13 year old Gianna. We were just starting to get to know her as well. Through courtside interactions with her father, or Instagram clips of him coaching her youth games. On the court Kobe had always been larger than life, a giant. But off the court he was just beginning to grow into the embodiment of life's most precious moments, the little ones in between the big. And those little moments that he shared with the one's he loved, and the moments he gave us to share with ours, those moments are invincible.