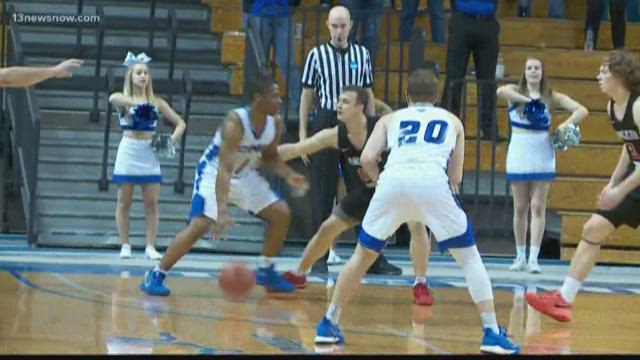 NEWPORT NEWS, Va. - It was the only shot he hit all night. Junior guard Tyler Femi, who had missed three previous attempts Friday night, drained a three-pointer from the left wing in the final seconds to send the Captains of Christopher Newport to the second round of the NCAA Division III Championship. CNU, now 22-6, defeated Lancaster Bible College, 68-65, and will play Franklin & Marshall Saturday night at 7:00 p.m.

"I knew it was going in," Head Coach John Krikorian exclaimed after the victory. "The second he put it up I had a feeling. Tyler is such a winner, and I wouldn't have wanted anybody else to take that shot. He worked so hard tonight and probably played more minutes than he should have, but we made that decision earlier in the second half and he ended up making the difference."

The Captains trailed by two at the half, 40-38, after Lancaster Bible shot 47 percent from the floor in the first 20 minutes. CNU's defense locked down in the second half, holding the Chargers scoreless for the first five minutes and holding them to just 26 percent shooting after halftime.

CNU jumped in front early in the second half and eventually stretched the lead to nine, 65-56, with 2:14 to play. The Chargers would not go quietly, as Lancaster Bible went on a 9-0 run to tie the game on a Christo Majok layup with just seven seconds left. The Captains raced down court and Femi was able to get loose for the dramatic conclusion, sending the Captains to the round of 32 for the third straight season.

"Lancaster Bible was fantastic tonight," Krikorian continued. "They shot it so well in the first half they really forced us to tighten up our defense in the second half. They're well coached and very talented and pushed us to the end."

Femi's stat line also included seven rebounds and six assists in 36 minutes of playing time. Senior Aaron McFarland led the Captains in scoring with 24 points, and set a new school record for games played. It was the 117th game in a CNU uniform for McFarland, who now has 1,541 career points and is ninth on the school's all-time scoring list. Sophomore Nick Parks was also in double digits with 11 points for the Captains.

The Chargers out-rebounded CNU for the night, 40-37. Lancaster Bible's season ends with a 23-6 final record, and the Chargers were led by senior Bill Livezey's 15 point performance. Fellow senior Herbie Brown finished with 13 points and ten rebounds and Majok ended up with a dozen points.

Saturday night's regional final between CNU (22-6) and Franklin & Marshall (21-6) will be the first-ever meeting of the schools. Tipoff time is set for 7:00 p.m. at the Freeman Center. The Diplomats advanced Friday at the Freeman Center with a 73-59 victory over Emory & Henry.