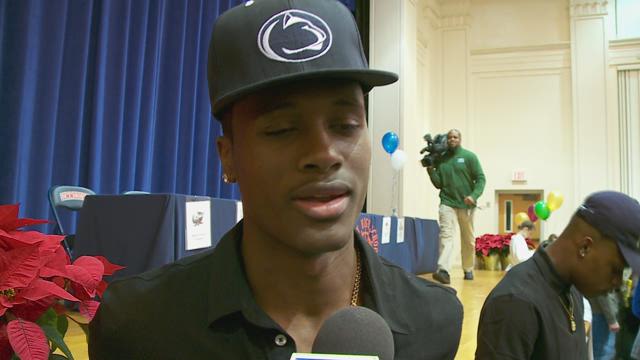 NORFOLK, Va. — In international sport, it's usually referred to as a "Golden Generation". Be it the Spanish soccer team that brought home the country's first World Cup in 2010, or the Argentinian hoopers that dethroned the United States for Olympic gold in 2004. Every once in a while cosmic entropy will birth a collection of talent close enough in age and space that it leads to unparalleled athletic glory.

These Maury Commodores have made their case, and today may have been a closing argument.

Roughly 9 months after wining the state basketball title, and just 4 days after securing their first such football title in 8 decades, 5 key pieces of that team signed their letter of intent to play Division I college football.

It should be noted that today is only EARLY Signing Day, many players don't actually commit until February, but such is life as a Maury Commodore these days.

Keandre Lambert is the headliner and he'll head to Happy Valley to play for the Penn State Nittany Lions. Lambert stands as one of the crown jewels in Coach James Franklin's latest class.

CJ Beasley goes south to Coastal Carolina, who gave him one of his first offers, and whose coaching staff even drove to Beasley's parents home in the Sunshine State to secure his commitment.

Darian Varner will embrace big city life as he settles in at Temple, nestled right inside Philadelphia.

Dashuan Peele goes to Annapolis, where he'll play for a Navy team that finds itself ranked in the Top 25 more often than not.

And Ty'Shuan Granger rounds out the Fab 5 with a commitment to Towson, where he hopes to get clock early in his career.