Ryne Moore, who pitched 7 brilliant innings, as the Monarchs defeated the Gamecocks 2-1 before a crowd of 7,315, the largest ever to see an ODU team play. 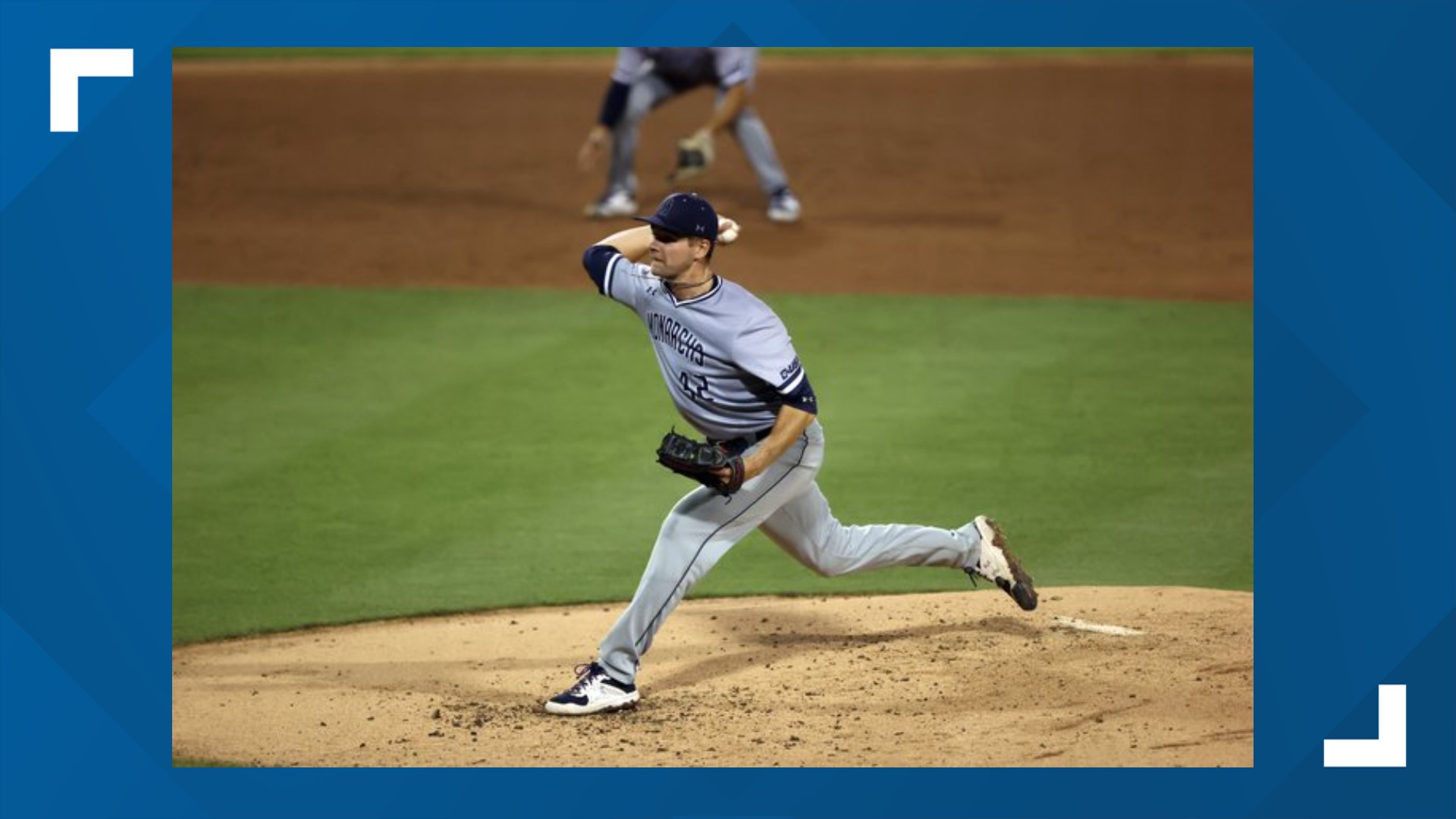 GREENVILLE, N.C. — It was a gut-wrenching game, where every pitch, every at bat, every ground ball mattered. Old Dominion University and the University of South Carolina matched off in a tense, 3 1/2-hour pitching dual Saturday night at Founders Park, and although ODU's stock in trade has been its hot bats, it was the Monarch pitching staff that gave ODU one of the biggest victories in school history.

Riding on the shoulders of starter Ryne Moore, who pitched seven brilliant innings, the Monarchs defeated the Gamecocks 2-1 before a crowd of 7,315, the largest ever to see an ODU team play.

The Monarchs are one victory away from a berth in the super regional, or what in basketball parlance would be called the Sweet 16. The Monarchs play either Virginia or South Carolina Sunday night at 6.

U.Va. and South Carolina meet at noon in an elimination game. A victory Sunday gives ODU its first regional title. A loss means ODU would play again Monday for the final and deciding game.

Coach Chris Finwood said the Monarchs needed a great performance from Moore after he went deep into his bullpen in Friday's 4-3 victory over Jacksonville, and the junior from Limerick, Pennsylvania delivered.

Moore threw 117 pitches, struck out eight, allowed three hits and only one run in seven innings. And he forced a flyout in the bottom of the seven to get out of the inning with the bases loaded.

"That was a 'For the Love of the Game movie type moment," Finwood said. "He just kept making big pitch after big pitch.

"He's been fantastic for the the last five weeks. He's been an absolute warrior out there.

"What a gutty, gutty performance."

Although ODU is seeded No. 11 in the NCAA tournament, and No. 1 in the region, this victory was almost certainly considered a surprise in many corners.

South Carolina was playing at home, and there are few programs with a better baseball resume. South Carolina is an SEC team, with two national championships, 32 NCAA tournament appearances and seven East Division SEC titles.

ODU hadn't won a league title from 25 seasons until last week and entering the Columbia regional, had not won an NCAA tournament game in 26 years.

And yet the Monarchs prevailed, under difficult circumstances.

Finwood said he didn't expect the crowd, the glare of national TV cameras or the pressure of a big game would faze his Monarchs. And none of it did.

ODU then took the lead in the top of the eighth on a rare pitching error from starter Thomas Farr, who also pitched well.

Kenny Levari and Carter Trice began the inning with singles, and moved to second and third on a Brock Gagliardi groundout.

With two outs, South Carolina elected to send Matt Coutney to first to avoid his strong bat. He homered for ODU in the second inning.

But with Farr tiring, shortstop Tommy Bell took the count to 3-2 and was walked, scoring Levari.

Finwood said that Bell, a senior, earned the walk.

"Hes a veteran and he laid off a couple of breaking balls down," Finwood said. "He got down two down strikes and just battled."

Aaron Holliday then came in to relieve Moore, and claimed the save.

Holiday has struggled for ODU

Farr, a hard-throwing righthander, mowed down ODU's first five batters in a row. But with the wind blowing to left field, with two outs in the bottom of the ninth, Coutney smashed a fast ball that landed beyond the bullpen.

That gave ODU a 1-0 run in a game that continued to be a pitcher's duel to the end.

South Carolina mounted a threat in the bottom of the third. When leadoff hitter Brady Allen singled to left and then Andrew Eyster hit the ball to the right side of second base for what in most circumstances would have been a double play.

But Allen broke for second on the pitch, and after second baseman Carter Trice scooped up the ball, he attempted to tag Allen, whose momentum knocked the ball from Trice's glove.

With men on first and second and one out, Moore faced the best hitters in South Carolina's lineup – Wes Clarke, who has 23 home runs, and West Sightlier. He struck them both out to end the inning.

The Gamecocks scratched in the fourth inning, in part because of unforced errors.

With one out, Braylen Wimmer doubled, then advanced to third on a wild pitch. Colin Burgess was then hit by a pitch, leaving runners at the corners. Joe Satterfield then hit a long sacrifice fly to center field that scored Wimmer.

Moore then struck out George Calli on a called third strike.

ODU threatened in the top of the six, putting two men on base with two outs. Kyle Battle then walked to load the bases. But Levari grounded out to first and the Monarchs stranded three baserunners.

An inning later, Coutney lofted a towering fly ball to right field that a day earlier, would have cleared the outfield fence by 100 feet. But the wind direction changed during the day, blowing from right to left, and that was enough to keep the ball in play by a few feet.

ODU had another scoring chance in the top of the seventh, when Thomas Wheeler doubled to left center with two outs. Battle then smashed a sharply-hit ball to right field, right to Eyster, who gloved it with no problem.

Then came the game-winning run an inning later.