Monday's win marks the third 4-0 start to the conference schedule in the past three seasons. 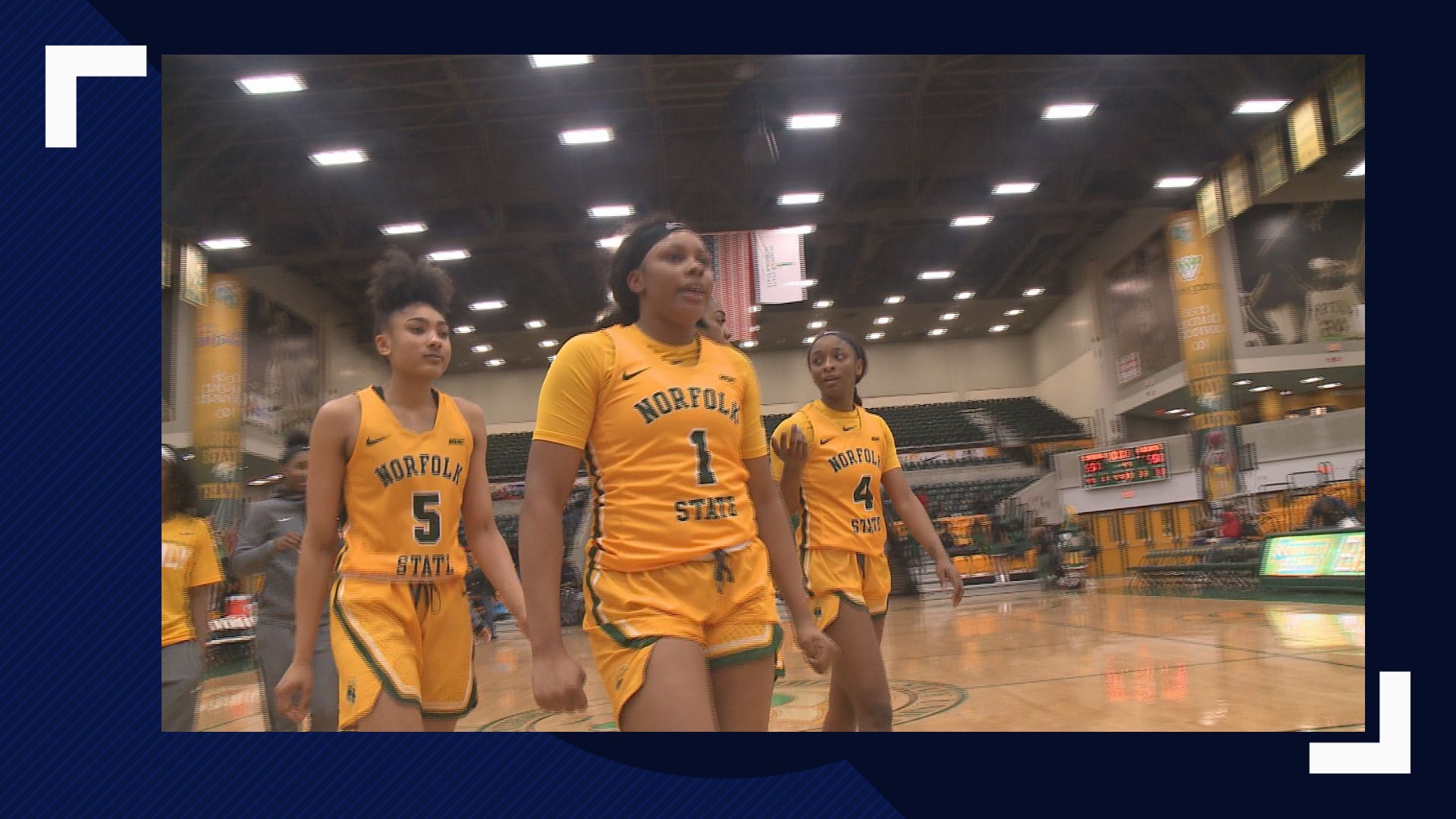 NORFOLK, Va. — Norfolk State women's basketball jumped out to a 4-0 mark in MEAC play with a 57-50 win over 2018 regular season co-champions Bethune-Cookman at Joseph Echols Hall on Monday evening. The Spartans (9-8, 4-0 MEAC) notched their first win over the Lady Wildcats (8-7, 1-2) in the tenure of head coach Larry Vickers and snapped a five-game losing streak against B-CU.

Monday's victory marks the third 4-0 start to the conference schedule in the past three seasons. The Spartans are vying to post three-consecutive winning conference seasons for the first time since joining the MEAC in 1997-98.

Seven NSU players recorded at least one field goal in the win, led by Kendrea Dawkins. The redshirt-junior continued her stellar run of form with her first-career double-double, finishing with 18 points and a career-best 10 rebounds. In her past six games, Dawkins is averaging 14.5 points and 5.2 rebounds. Khadedra Croker joined Dawkins in double figures with 12 points and assisted four times, matching her career high. In addition, the Suffolk, Virginia native accounted for both of NSU's blocks.

NSU's dominance inside was vital on a night when neither team fared well from 3-point range. The Spartans outscored the Lady Wildcats 42-26 in the paint. From long range, the teams combined to go 4-of-27 (14.8 percent) with a pair of makes each.

Norfolk State shot 50 percent from the field in the first half en route to a 35-27 lead. The Spartans were balanced and unselfish on offense, assisting on 11 of their 15 makes. Six NSU players recorded a field goal in the half and four recorded two or more assists. A slow start to the game saw Bethune-Cookman grab a 7-5 lead with 4:16 left in the quarter. Alexys Long kicked off the game with a 3-pointer before the Lady Wildcats netted the next five points.

Dana Echols gave NSU an 8-7 lead on a trey at the 4:03 mark then tacked on a jumper 37 seconds later. Angel Golden's first basket of the game drew B-CU back to within a point, but the Spartans scored eight of the last 12 points for an 18-13 lead at the end of the quarter.

Six points from Croker and a basket by Echols gave NSU a 26-17 lead with 6:22 left in the second quarter. From there, both sides traded baskets until the Lady Wildcats strung together back-to-back baskets inside the final two minutes of the half.

Alyssa Jones hit from the field with 1:38 left on the clock. Thirty-one seconds later, Golden knocked down a jumper to shrink the Spartans' lead to 31-27. Dawkins laid it in just inside the one-minute mark, and Echols sank a pair of free throws to send NSU into the intermission up seven, 35-27.

The Spartans held Bethune-Cookman to five points on 2-of-10 shooting in the third quarter, building a 15-point advantage in the process. The Lady Wildcats did not score their first basket of the period until the 5:40 mark, turning it over five times before finding the bottom of the net. After Alyssa Jones' jumper, B-CU went scoreless for another three-plus minutes with four-straight misses from the field. Offensively, the Spartans scored all but two of their points in the paint in the third quarter. Dawkins scored six points in the period on 3-of-6 shooting.

The active hands of Danyael Goodhope made an early impact in the quarter. Goodhope logged two steals inside the opening two minutes and scored on a transition layup to make the score 39-27 with 8:45 to play. In her first start of the season, Goodhope filled the box score with four points, five rebounds, five assists and five steals in 32 minutes. She made life miserable for B-CU guards throughout the game, pressuring ball handlers for the full 94 feet of the court.

A 7-0 run spanning the end of the third period and the start of the fourth gave NSU its largest lead of the game at 49-32, but the fourth quarter would belong to the Lady Wildcats. B-CU outscored the Spartans 18-10 in the period to put a dent in the final margin.

An 8-0 run by Bethune-Cookman cut the deficit to 49-40 with 7:18 remaining. Chasimmie Brown contributed to six of those eight points and ended the game with 10 points on 3-of-9 shooting. She entered Monday ranked second in the MEAC in shooting percentage (51.9 percent).

The Spartans led by 12, 55-43, with three minutes remaining, but B-CU closed out the game on a 7-2 run. Norfolk State limited reigning MEAC Preseason Player of the Year Angel Golden to 11 points on 4-of-18 shooting (22.2 percent). She was one of three Lady Wildcats to finish the game in double figures, joining Brown and Amaya Scott (11). The Spartans assisted on 17 of their 25 baskets in the game for their fifth-straight game with double-digit assists. Additionally, NSU committed only 14 turnovers, extending its streak of games with fewer than 20 giveaways to five games.