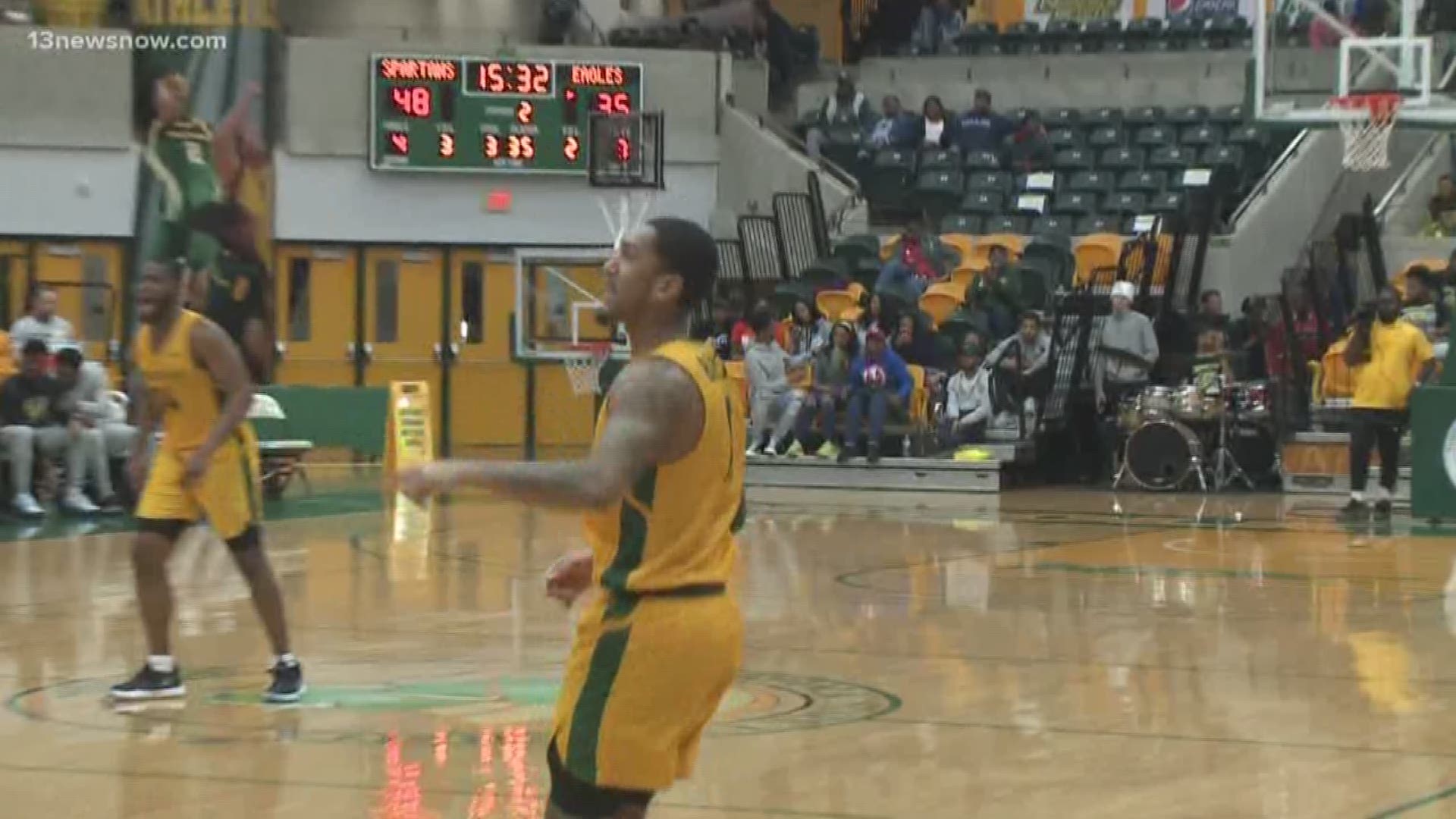 NSU's strong second half on the glass – +18 after halftime – helped the Spartans pull away from the Eagles in their second-to-last home game of the year. They overcame a 13-point first-half deficit to take an eight-point lead at the break, ballooning their lead to as much as 23 in the second.

The Spartans also took over sole possession of first place in the MEAC at 9-2, a half game ahead of North Carolina A&T (9-3). Bishop tied his season high in points after shooting a career-best 6-of-11 from deep with five rebounds, two assists and two steals. After playing just two minutes in the first half, Jenkins made 3-of-7 from 3-point range and 6-of-10 overall in the second for a 15-point performance. NSU finished with 11 3-pointers on the night.

The Spartans got back to .500 at 13-13 overall. Senior Steven Whitley had a double-double of 11 points and a season-high 12 rebounds with five assists and three steals. Junior Devante Carter added seven points with a career-high 11 rebounds, five assists and two steals as well. Whitley made all five of his free throw attempts, and NSU went 17-of-19 from the line. Coppin State had four players in double figures, but the Eagles had just seven players dress and got all but one point from their starting five. They started off well, jumping out to a 14-4 lead to start the game. CSU pushed its advantage to 13 with a little more than eight minutes to go in the first half on a bucket by Dejuan Clayton. And then, Bishop took over.

He connected on three straight 3-pointers and had five altogether during a 20-1 run that put the Spartans ahead by six, 29-23, with 3:37 to go in the first half. The Eagles cut the deficit to one late in the stanza, but NSU scored seven in a row to end the half. Five of those points came in a flurry in the last 15 seconds thanks to two CSU turnovers, as NSU went into the locker room up 40-32.

Bishop had his sixth and final 3-pointer of the game to close out the first 20 minutes of play. Sophomore Joe Bryant Jr., meanwhile, had two 3-pointers early in the second half as the Spartans scored eight in a row to start the period. That put them up 48-32 just a minute and a half in. The Eagles trimmed NSU's lead to eight, but Jenkins had two 3-pointers during an 11-0 run for the Spartans, extending their lead to 65-46 with 9:20 left.

Jenkins had two more buckets, and a layup from Bryant made it a 23-point ballgame with four and a half minutes still to go. Bryant ended the contest with 10 points.

The Spartans earned the win after shooting less than 39 percent from the floor, including 11-of-35 from deep. They outscored the Eagles 19-2 in points off turnovers despite both teams finishing with 14 giveaways. NSU held an 18-8 edge in offensive rebounds.

Coppin State shot just 36.5 percent from the floor. Koby Thomas led the Eagles with 15 points, and Clayton added 13. Andrew Robinson (14 points) and Brendan Medley-Bacon (10 points, 11 rebounds) also scored in double figures. NSU will play four of its last five regular season games on the road, beginning with a trip to Florida A&M and Bethune-Cookman this weekend.