North Carolina Central came back from 15 points down in the second half, holding the NSU scoreless for more than eight minutes. 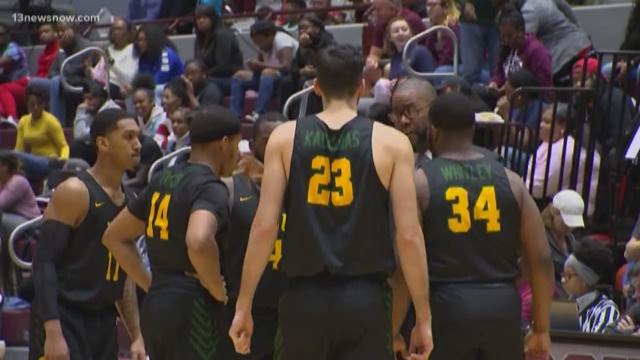 DURHAM, N.C. — North Carolina Central came back from 15 points down in the second half, holding the Spartans scoreless for more than eight minutes in a 69-63 win over the Norfolk State men’s basketball team on Monday evening at McDougald-McLendon Arena.

The Spartans had control early in the second half, turning a six-point halftime edge into a 15-point lead less than five minutes into the second period. The Eagles began to close the gap, but it was not until their big 16-0 run at the end with the crowd putting life into the gym that they surged ahead for good.

The Spartans had just one field goal in the last nine minutes of play, shooting 1-of-12 with four turnovers during that time. Despite missing nine straight shots during the scoreless drought, they still shot a respectable 46 percent for the game thanks in part to a 61 percent first-half effort.

The Eagles trailed by 10 when NSU hit the dry spell. Freshman Tyrese Jenkins nailed his second 3-pointer of the game with 9:05 to go for a 59-49 Spartan advantage. It took almost six minutes for the Eagles to finally tie the game, and a 3-point play from Jibri Blount and a 3-pointer from Deven Palmer capped the 16-0 spurt. Blount’s drive to the bucket on a fastbreak with 2:42 left gave NCCU its first lead of the evening.

Palmer’s trey from outside the right wing came with 1:45 left, putting the Eagles up by six. NSU then missed the front end of a 1-and-1 and another field goal attempt with less than a minute to go. Senior Jermaine Bishop sank two from the foul line, and sophomore Joe Bryant Jr. finally ended the field goal drought with 20.0 seconds left. But NCCU made both of its free throws, and the Spartans missed two more shots from beyond the arc in the closing seconds.

Junior Devante Carter led NSU with 14 points on 6-of-9 shooting with four rebounds, three assists and two steals. Jenkins added 12 points on 4-of-7 field goal attempts for his second straight solid game off the bench. Bishop finished with 10 points, seven rebounds and a season-high seven assists.

North Carolina Central was led by C.J. Keyser with 23 points on 7-of-10 shooting, 8-of-9 from the free throw line. The Eagles shot 50 percent for the game, outscoring NSU by 12 in the second half.

The Spartans led for more than 34 minutes and never trailed until the last few minutes. NSU had the early advantage to start the game, including at 16-10 after 3-pointers from junior Spirit Ricks and Jenkins, the latter at the 14:05 mark of the first half. The Eagles scored eight of the next 10 points, but Ricks had two more buckets as NSU went ahead by five.

Freshman Yoro Sidibe’s trey from the left wing capped a 14-4 run started by Ricks and gave NSU a 10-point edge, 32-22, with a little more than five minutes remaining in the half. The Eagles got as close as three, but a corner 3 from junior Kashaun Hicks gave the Spartans a 38-32 lead going into the break.

The Spartans started the second half on a 13-4 run, with 11 of the 13 coming from the tandem of Carter and senior Steven Whitley. That pushed their lead to 51-36 just a few minutes in, their largest of the game. But the Eagles scored 11 of the next 14 points to cut the Spartan advantage to seven.

It was still a seven-point game two minutes later at 56-49 midway through the second half. Jenkins’ 3-pointer from the left corner a minute later marked the last field goal for a while. For the game, the Spartans made 8-of-22 from deep, while NCCU was 7-of-22. The Eagles made 10-of-12 from the free throw line in the second half, and for the game they outscored the Spartans 32-22 in points in the paint. Whitley finished with nine points, and Ricks added eight with five rebounds. NSU’s bench outscored NCCU’s by a 26-4 margin.

For the Eagles, Palmer contributed 13 points and six rebounds, and Blount totaled 12 points and 10 boards. Justin Whatley also scored in double figures with 10. NSU will return home to host Delaware State next Saturday at 6:30 p.m. at Joseph Echols Hall.