With the 64-61 loss, it might impact the Monarchs’ hopes of claiming an NCAA tournament at-large bid. 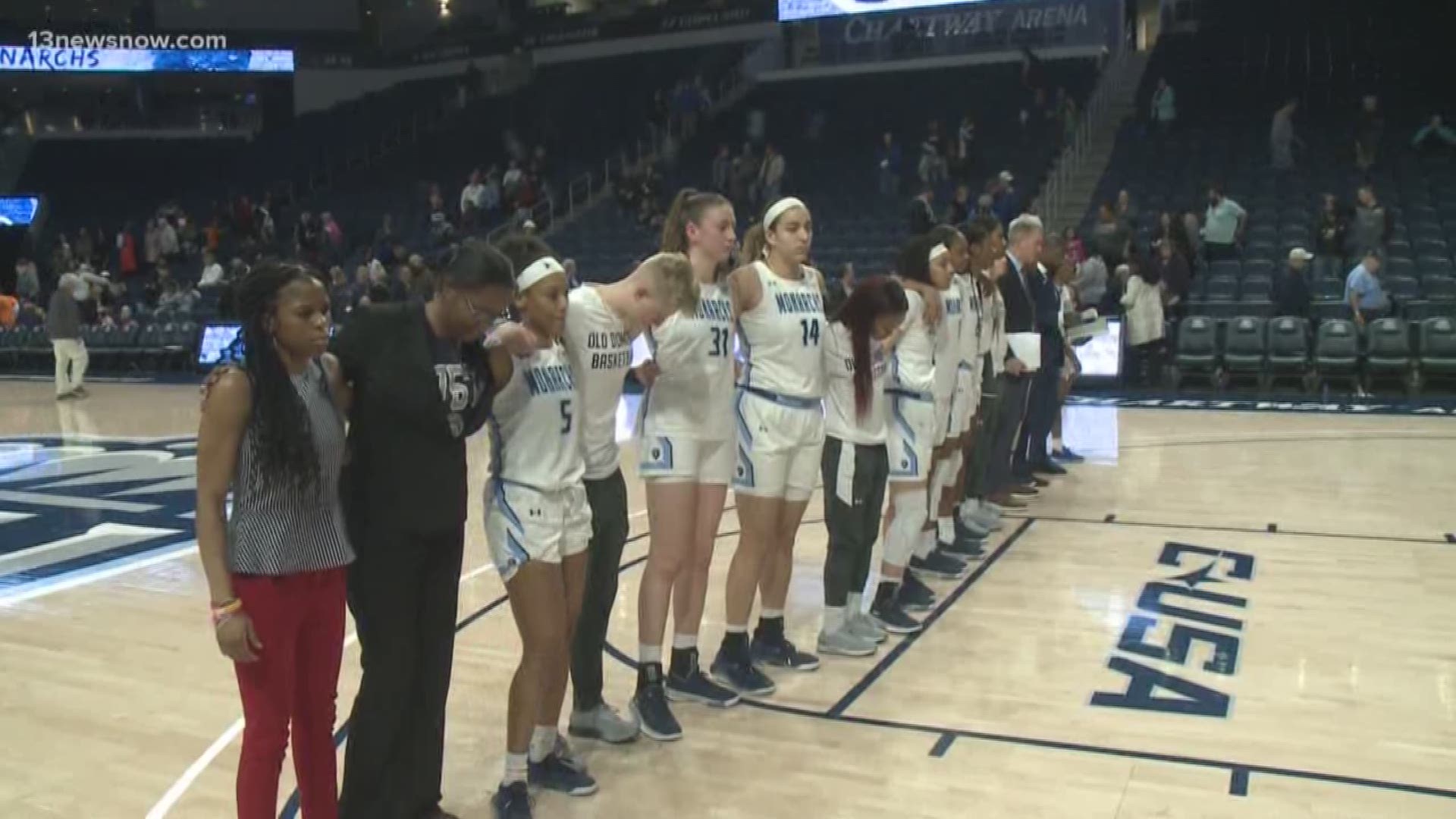 NORFOLK, Va. — Senior Night did not go the way the Old Dominion women’s basketball team wanted it to Thursday night as the Monarchs succumbed to UAB, 64-61, at Chartway Arena.

ODU plays Rice Saturday at Houston and the winner claims the Conference USA regular-season championship. Should the Monarchs win, they would finish tied with the Owls for first place. However, ODU would win the tiebreaker, the regular-season crown and, more importantly, the top seeding in next week’s Conference USA tournament in Frisco, Texas. “It’s a must win for us” against Rice, McCray said after grabbing the microphone to thank the crowd of 2,069 shortly after the game. “There’s a lot of basketball left to play. This one hurts. It stings. But from what I know about this team, it will quickly bounce back.”

Senior night festivities were, as usual, emotional for players and fans. Senior players Taylor Edwards and Ashley Scott were honored at mid-court along with senior managers Isaiah Fernandez and Dahkel Darling.

Then McCray stunned her players and the crowd of by singing the pregame national anthem. “There was some emotion left” when the game started, McCray said.

UAB (19-10, 11-6), however, was laser focused and bolted to a 16-0 lead. After ODU missed its first eight shots, freshman Marie Reichert finally knocked in a layup after a 6 minute and 5 second drought. Reichert, a 6-foot-2 center from Kassel, Germany, played perhaps her best game of the season. She scored 12 points and had five rebounds, three steals and two blocked shots.

The Monarchs slowly chipped away at the lead and led at halftime, 27-26. ODU led again, 55-53, when Ajah Wayne made two foul shots with 1:17 left in the fourth quarter. Wayne tied the score with a pair of foul shots, 55-55, with 26.5 seconds left to send the game into overtime. ODU had its chances in overtime, but made just 4 of 8 free throws. UAB’s Lea Kerstein stuck a dagger into the Monarchs by burying a 3-pointer with .4 seconds left.

ODU’s Victoria Morris manage to get off a reasonably decent last shot but her off-balance three-pointer missed. ODU likely lost the game at the foul line, where they made just 12 of 22 shots (54.5 percent). UAB, which had three players foul out, made 9 of 11 (82 percent).

Wayne led ODU with 15 points, with most coming on difficult shots inside the lane, and Edwards and Amari Young added ten apiece. Edwards was in foul trouble most of the game, and played just 20 minutes, but said it’s a night she will always remember. “We didn’t get the outcome we wanted, but I enjoyed my senior night,” she said. “My family came out. I got the chance to play in front of our fans one more time.”

She said McCray told the team that the Monarchs still control their own destiny. “We’re still in control,” she said. “We can’t worry about what’s behind us. It hurt, it stunned us, to lose tonight. But we’ve got to stay locked in and focused for our next opponent.”