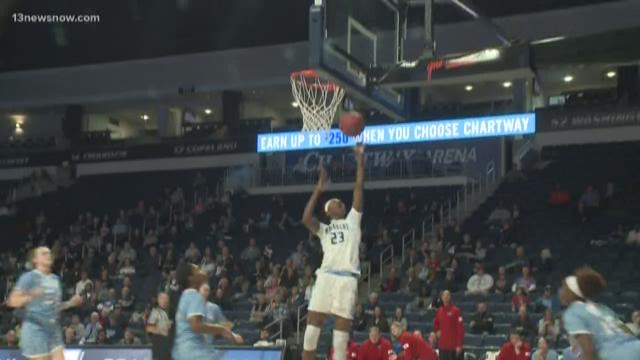 NORFOLK, Va. — Behind a breakout performance from sophomore Amari Young, the Old Dominion (18-3, 8-1 C-USA) women's basketball team defeated LA Tech, 77-61 for its seventh-straight win this season. Young scored a career-high 21 points, while grabbing a career-high 16 rebounds in front of 2,396 fans at the Chartway Arena.

"I'm really thankful for a great win on alumni weekend," said head coach Nikki McCray. "I thought our kids really represented the spirit of Old Dominion women's basketball and what that meant to all the players that have come before them. From the coaches, to the greats and the players that have played in that uniform."

ODU got off to a strong start, outscoring the Lady Techsters, 21-11. In the first quarter, ODU shot 53 percent, going nine-for-17. In the opening minutes, LA Tech (10-10, 2-7 C-USA) scored first but a 15-5 Monarch scoring run was too much for LA Tech in the opening quarter. ODU turned up its intensity in the second quarter, shooting 67 percent. Amari Young added six points, going three-for-three from field goal range. The Monarchs went into the locker room with a 42-26 lead with eight different players scoring.

The Lady Techsters jumped out from the break outscoring ODU, 15-13. Aziah Hudson gave ODU 11 of its 13 points in the third quarter, draining three from beyond the arc. Seven of Young's 16 boards were grabbed in the third. In the final frame, Young surpassed her career-high points scored when she notched three layups and one free throw.

Overall, the Monarchs bench scored 37 of its points. Senior Taylor Edwards nearly picked up a double-double, scoring 11 points but coming up two assists shy. ODU held a 41-23 rebound advantage and shot 52 percent overall. "We didn't have a whole lot of mistakes tonight but we're still in a position to continue to get better. That's a true credit to a team when you can continue to play when you have key players, like Ajah Wayne who is out."