ODU rallies from 20 points down, but loses in OT to UTSA

The Monarchs went on a 12-5 run to end regulation sending the contest into overtime, but ODU lost 85-81. 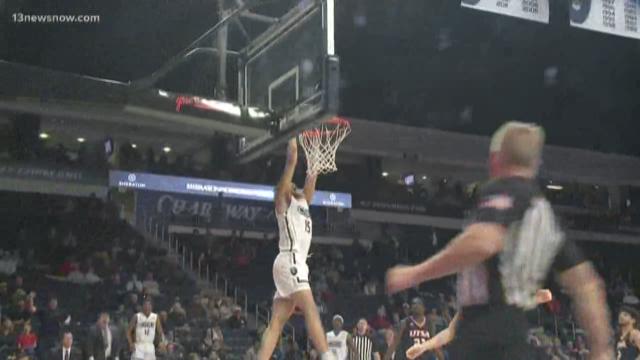 NORFOLK, Va. — After trailing by as many as 20 in the first half, the Old Dominion men's basketball team (9-15, 5-6 C-USA) clawed its way back and forced overtime; however, Jhivvan Jackson's game-high 45 points lifted UTSA (11-13, 5-6 C-USA) over the Monarchs by an 85-81 score on Thursday night at Chartway Arena. Malik Curry turned in a career-high 30 points, while A.J. Oliver II followed with 20 points and Aaron Carver hauled down a game-high 20 rebounds.

ODU opened the second half on a 32-16 run, narrowing its deficit to just one, 60-59, at the 5:41 mark. UTSA responded with six unanswered points to take a 66-59 lead with 3:20 to play, before the Monarchs went on a 12-5 run to end regulation, capped off by a Curry free-throw with five seconds remaining regulation, sending the contest into overtime.

With 2:19 left in overtime, the Roadrunners held onto an 80-76 advantage. An Xavier Green three-pointer pulled ODU within one, 80-79, with 34 seconds to play. Four UTSA makes from the charity stripe opened its lead back up to 84-79 with only 19 seconds left, before the Roadrunners ultimately escaped Norfolk with a four-point victory on Thursday night in Norfolk.

"Losing these close games is getting old," explained ODU head coach Jeff Jones. "I don't want to take anything away from UTSA. We didn't have much fight in the first half. I'm past that we fought in the second half, we shouldn't have had to come from that far down. You play the games to win and we need to figure some things out. I understand our guys fought like crazy, but again, you play to win."

The Roadrunners claimed a 44-27 lead at halftime behind 28 points from Jhivvan Jackson on 11-14 shooting from the floor. Curry paced the Monarchs with 14 points in the opening 20 minutes, while Oliver II followed with nine.