ODU's Young has provided a much needed spark

The Monarchs have had to depend on Amari Young since Ajah Wayne got injured. 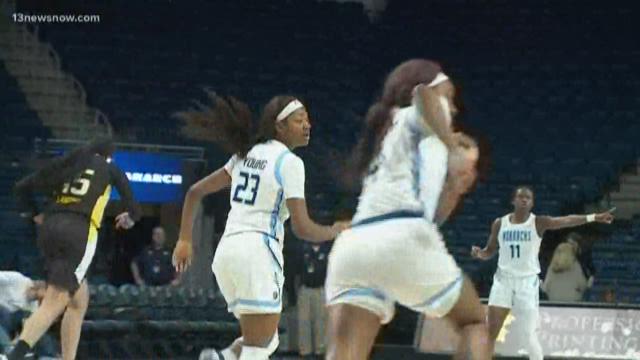 NORFOLK, Va. — Despite being hit with injuries to key players this season, the Old Dominion women have still found ways to win this season. One key has been sophomore forward, Amari Young.

Since Ajah Wayne has had to wear a boot on her right foot, the ODU women have had to rely on Young to pick up the slack. She has nearly matched Wayne's numbers as the Monarchs sport a current record of 20-3 along with a 10-1 mark in Conference USA. It includes being unbeaten at home (10-0). Young says head coach, Nikki McCray was the one doing the encouraging. "We had a conversation in California in December", she says. "She talked to me about being more aggressive. What my responsibility on the team was so I just what she asked of me".

McCray was a little more candid. "I said 'Hey! We need you to do this'. It's time", she said. "When you don't do this, it hurts our basketball team and I asked her if you wanted the responsibility and she said she did". Young responded with 21 points, 16 rebounds in the Monarchs 77-61 win over Louisiana Tech. They've since extended their current win streak to nine in a row. Old Dominion hosts Rice on Thursday at 6:30pm with first place on the line in Conference USA.