Strong second half carries UAB over the ODU women

Despite a big night for Victoria Morris who had 26 points for the Monarchs, the Blazers won 74-61. 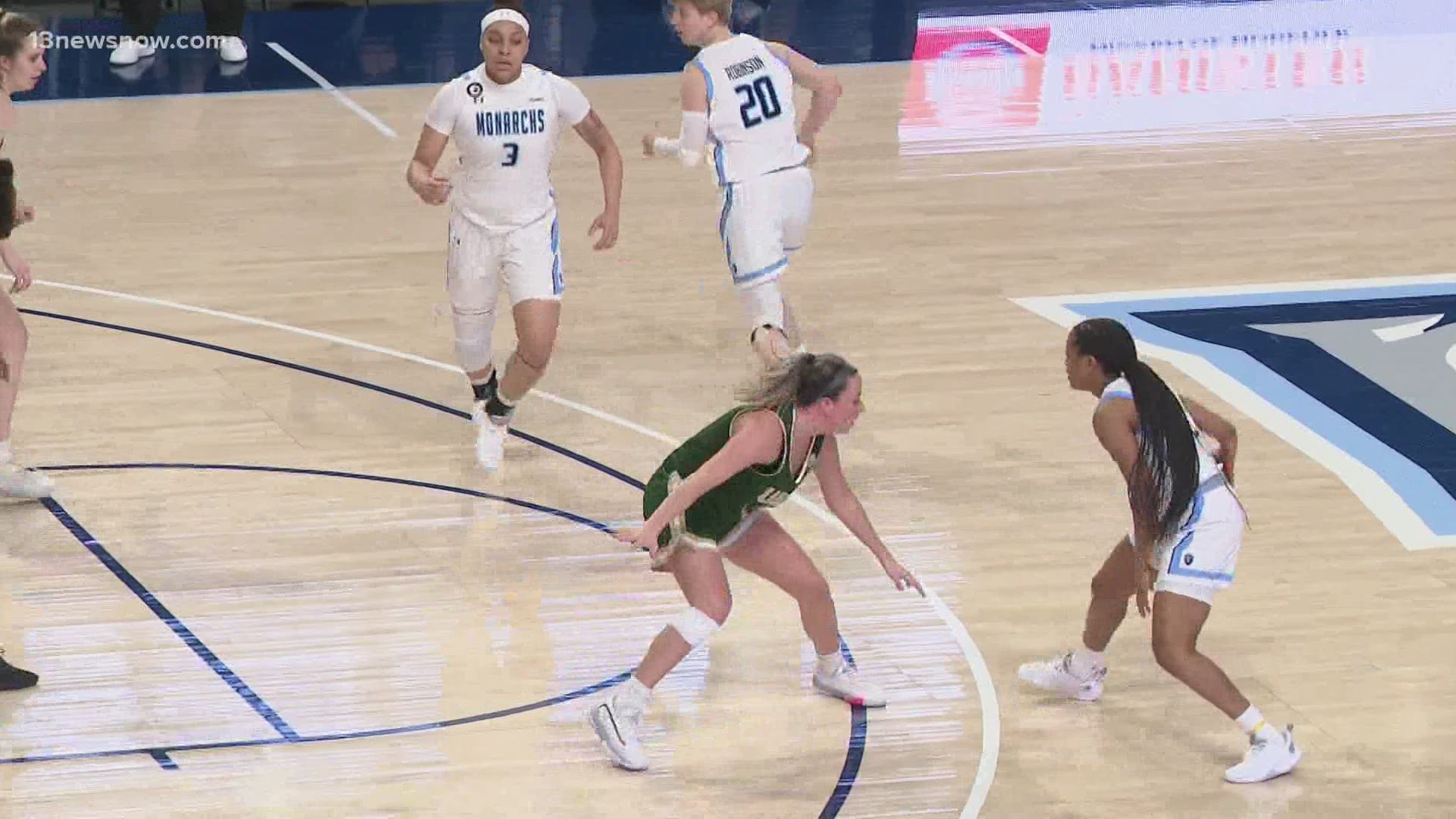 The Old Dominion (6-9, 3-8 C-USA) women’s basketball team took a tie game into halftime but a standout performance of 27 points and 21 rebounds from UAB’s Zakyia Weathersby was too much for the Monarchs, falling to UAB, 74-61 on Friday night.

UAB women too strong in second half for ODU

“I thought in the beginning we had an idea of how to stop them but of course the clear advantage they had was in the paint with Weathersby. She had a tremendous first half and that caused us to make some adjustments, explained head coach DeLisha Milton-Jones. “That adjustment then opened up the three-point line for UAB.”

Junior Amari Young drained the first bucket of the contest to put ODU on the board first. The Blazers responded with back-to-back buckets to get ahead by two, but a Maggie Robinson jump shot tied the game early on. At the 6:34 mark, senior Victoria Morris drained a three-point field goal to flip momentum in favor of ODU the remainder of the first quarter. ODU outscored the Blazers, 16-11 through the first quarter.

The Blazers (8-11, 3-10 C-USA) opened up the second quarter via a Weathersby bucket as ODU and UAB then traded baskets for the next four minutes of action. A Morris three-point field goal opened the Monarchs’ lead back up to six but the Blazers responded eight seconds later with its own triple. UAB narrowed the gap and got within one of ODU. The Blazers took its second lead of the contest at the 2:14 mark, however ODU responded quickly. The remainder of the quarter, ODU and UAB once again traded baskets, compiling five lead changes in a one-minute time frame. Back-to-back Blazer buckets gave them a three-point lead with eight seconds to go except Mariah Adams quickly answered with a triple at the buzzer, heading into the break tied, 32-32.

In the first half, Weathersby notched a double-double, her 11th of the 2020-21 season. The senior added 18 points and 10 boards, which made the difference in the opening 20 minutes, helping lead the Blazers to score 24 of its 32 first-half points in the paint.

ODU got the ball first out of the break and wasted no time notching back-to-back field goals, giving them a four-point advantage. The Blazers then took control, mounting a 6-0 run, however Morris poured in a bucket to tie the game back up again. The remaining four minutes played in favor of the Blazers as they gained a five-point lead heading into the fourth quarter.

The Blazers opened up the fourth quarter hot, draining back-to-back three-point field goals, opening up its lead to 11 points. Morris once again stepped up for ODU, draining a bucket to get back within nine points. At the 6:44 mark, UAB led by 13 points, opening up to its largest lead of the contest. The Monarchs slowly clawed back to get within six points with three minutes to go. The Blazers were dominant the rest of the way, extending its lead back to double digits to end its eight-game losing streak.

“There are some things that we definitely need to concentrate on. We need to make an intentional effort to push the ball in transition to get open looks, which would allow our defense and our ability to run to produce offense for us,” Milton-Jones said.

For the game, Morris led ODU with 26 points and added two rebounds and an assist. In her first game back since Jan. 16, junior Ajah Wayne put together 15 points and nine rebounds, just one board shy of a double-double.

ODU is back in action tomorrow, Saturday, Feb. 20 at 4 p.m. as they take on the Blazers again at Chartway Arena.