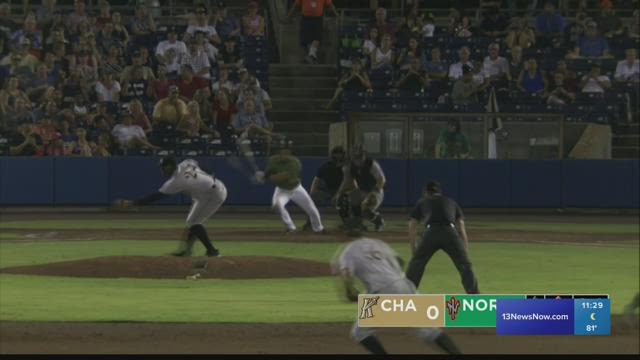 NORFOLK, Va.- Five Tides pitchers combined on a six-hit shutout and Norfolk plated three late runs in a 4-0 win over the Charlotte Knights Tuesday night at Harbor Park. Making his first appearance with Norfolk since being optioned from Baltimore, Norfolk starter Jimmy Yacabonis took a no-decision after limiting Charlotte to one hit over four shutout innings of work. He struck out five and issued just one walk, lowering his ERA to 2.91 in 14 starts with the Tides this season. Over his last eight outings with Norfolk, Yacabonis has now gone 3-1 with a 1.77 ERA while holding opponents to a .185 average (22-119).

The Tides were held without a hit until the sixth inning, but Cedric Mullins lined a one-out triple off of Jordan Stephens (3-3) to break up the no-hit bid. Luis Sardiñas followed with a ground ball single up the middle to give the Tides a 1-0 advantage.

The Tides held a one-run lead until the eighth, but Norfolk blew the game open with three runs and four hits off of Thiago Viera. Pedro Álvarez, Mike Yastrzemski and Drew Dosch connected for consecutive two-out run-scoring singles in the frame to extend Norfolk’s advantage to 4-0.

D.J Snelten (2-1) earned the win with 2.2 shutout innings of work, while Tim Melville, Donnie Hart and Jhan Mariñez finished out the contest to wrap up the two-game series sweep. Mariñez worked a scoreless ninth inning, giving him 11 consecutive scoreless appearances. With the win, Norfolk (43-39) wrapped up its season-long homestand with a 6-4 record.

The Tides will open up a five-game road trip on Wednesday – their final road trip before the All-Star break – with a 7:05 contest in Gwinnett. Matt Wotherspoon (2-5, 4.50) is slated to get the start for the Tides while the Stripers will counter with right-hander Matt Wisler (2-3, 3.94).