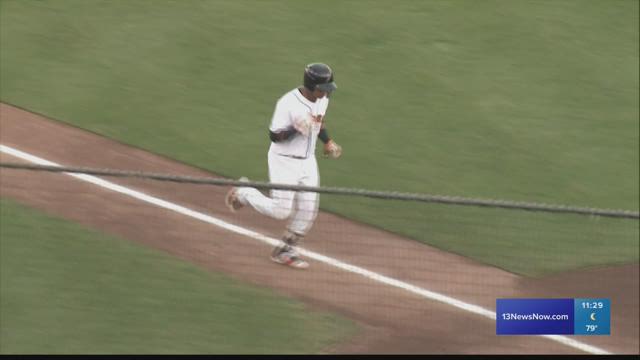 NORFOLK, Va.- Garabez Rosa homered and doubled to power a nine-hit attack, but the Durham Bulls charged past the Tides 5-3 Friday night at Harbor Park. Rosa got the Tides on the board in the first inning with an opposite-field solo blast off of Ryan Weber (5-3), then doubled and scored in the ninth inning. Rosa has now hit safely in five consecutive games, batting .400 (8-20) with a homer, three doubles and six runs scored over that stretch.

Donnie Hart made the start for Norfolk – his first professional start after opening his career with 254 consecutive appearances in relief. Hart retired all seven batters he faced, striking out four while throwing 19 of his 28 pitches for strikes. He’s now turned in five consecutive scoreless appearances with Norfolk and owns a 2.33 ERA in 21 games this season.

The Tides led the contest 1-0 until the fifth, but the Bulls took the lead off of Matt Wotherspoon (2-5) on an RBI groundout by Jeremy Hazelbaker and a run-scoring single from Kean Wong. Norfolk knotted the contest in the bottom of the fifth on an RBI double from Mike Yastrzemski, but Durham reclaimed the lead for good in the sixth frame thanks to a solo home run from Suffolk product Brandon Lowe – his eighth home in his last 10 games. The Bulls later added RBI doubles from Ji-Man Choi and Jason Coats to take a 5-2 lead.

Rosa doubled and scored as the Tides tried to rally in the ninth, but Ruben Alaniz retired the final three batters of the contest to earn his first save of the season. Seven of the nine Norfolk batters registered a hit in the contest, but the Tides finished 1-for-13 with runners in scoring position. The Bulls extended their lead over the Tides in the IL South to 3.5 games with the win, as Durham improved to 7-2 against Norfolk this season.