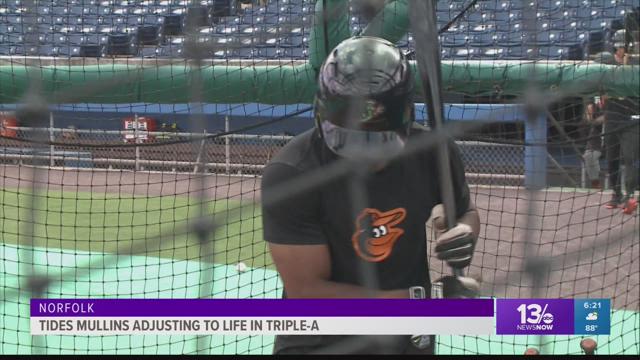 NORFOLK, Va.- Cedric Mullins continues to put in work since his arrival to the Norfolk Tides on June 1st from Double-A Bowie. At just 5-8, the 23 year old centerfielder posseses the modern day version of a 5 -tool player. Mullins has the speed not only on the offensive side of the ball, but is stellar in the outfield for Norfolk this season. He hasn't let his size stop him from coming up big. "Just growing up, I've always been one of the smaller guys", he says.

Mullins certainly has the support of his manager, Ron Johnson. "This kid has got power", he says. "He can hit the ball out of the ballpark. He's a plus defender in centerfield". The parent club Orioles are hoping they can insert Mullins in center in the not to distance future. That also depends on their current centerfielder and veteran, Adam Jones who's been a fixture the last decade in Baltimore. Jones will be entering a free agency year.