Tides rally to win in extras 5-4 over Stripers 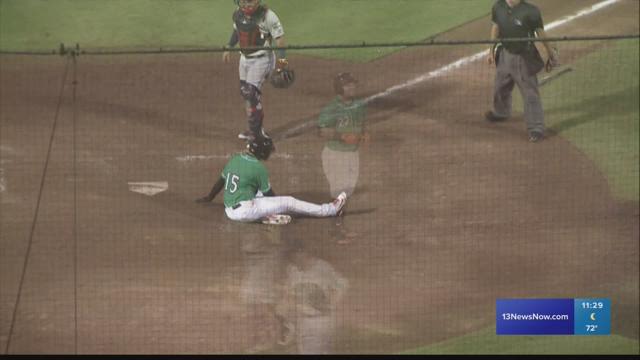 NORFOLK, Va.- DJ Stewart led off the bottom of the tenth inning with a single to score Luis Sardiñas as the Tides defeated Gwinnett by the score of 5-4. Asher Wojciechowski went a season-long 8.0-innings with eight strikeouts as Rubén Tejada knocked in three runs, including a game-tying two-RBI single with two outs in the ninth.

The Tides were coming off a game in which they recorded 10 hits but scored one run in a loss, but followed it up with 14 hits and five runs in tonight’s victory. With five runs scored Friday, they remained the second-highest scoring team in the International League behind Durham and recorded their sixth 10-hit game this month.

Norfolk entered the top of the 9th-inning clinging onto a 2-1 lead as Austin Riley (#8 prospect in the Atlanta system) led off the inning with a single off righty Tim Melville. Two batters later, Dustin Peterson belted a pitch off of Melville to right field that snuck just inside the foul pole for a go-ahead two run homer, giving Gwinnett a 3-2 lead.

After Gwinnett plated one more run in the ninth inning, Norfolk came to bat trailing 4-2. Drew Dosch led the inning off with a bunt single, but the Tides quickly found themselves down to their last out after two straight strikeouts. Mike Yastrzemski tacked on his second double of the night as Dosch moved up to third base, setting the stage for Tejada’s two-run, two-out single to tie the ball game. Gwinnett was held scoreless in the top of the 10th, which was followed by Stewart’s RBI base hit to secure a Tides victory.

Eddie Gamboa (1-0) earned the victory after coming on in the 10th and striking out one while not allowing a hit. This was Gamboa’s 16th career win with Norfolk, with his last win coming in 2015. Asher Wojciechowski saw the most action of the Tides pitching staff this evening after going eight strong innings. Wojciechowski gave up just one run on five hits, marking his team-leading sixth Quality Start and dropping his ERA to 3.51.

Mike Yastrzemski led the Tides offense Friday night, reaching base safely in each of his four at-bats with a single, two doubles and a hit by pitch. Yastrzemski and Rosa proved to be a potent tandem as the number seven and eight batters in tonight’s lineup, respectively, combining to go 6-for-7 with three doubles and three runs scored. Both Yastrzemski and Rosa were two of four Tides with a multi-hit game. The victory brings the Tides record to 47-42 as they sit 4.5-games behind Durham in the International League South standings, with Gwinnett’s record dropping to 39-52.