UVA denied a chance to defend title; falls to Ohio

Coming out of quarantine after a positive COVID-19 test, Virginia’s title defense was stopped by another upset loss in the NCAA Tournament, falling to Ohio 62-58. 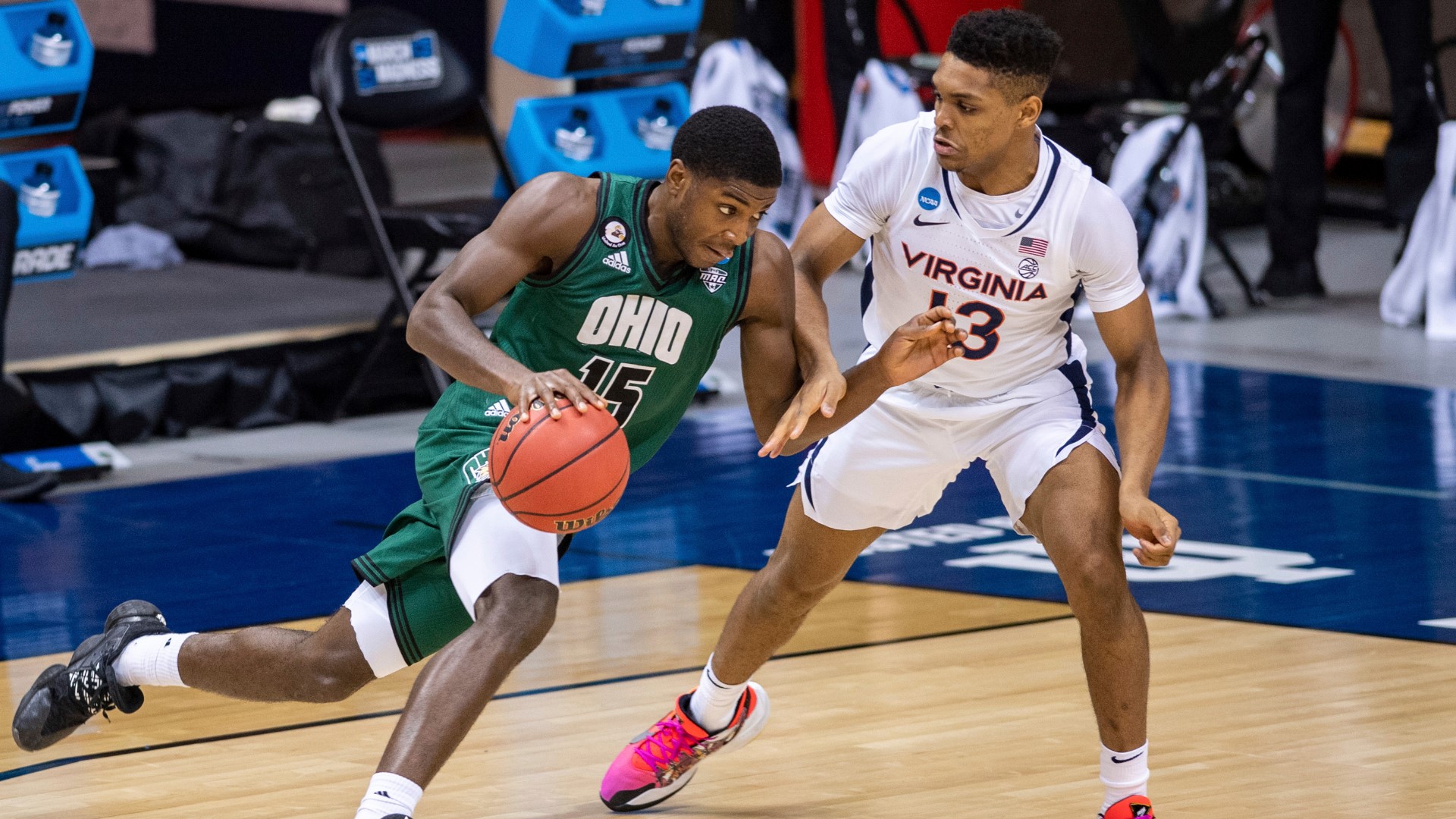 BLOOMINGTON, Ind — Virginia spent two years on top of the college basketball world. After one night in Indiana, it was all over for the Cavaliers.

Coming out of quarantine after a positive COVID-19 test, Virginia’s unusual title defense was stopped by another upset loss in the NCAA Tournament, falling 62-58 to Jason Preston and Ohio on Saturday.

“Our guys were again hopeful we’d get this opportunity,” Cavaliers coach Tony Bennett said. “The NCAA allowed us to come in in a unique way. I’m thankful for it, but it just stings right now to not advance in this tournament.”

No. 4 seed Virginia (18-7) won the ACC regular-season title and then had to withdraw from the conference tournament because of its COVID-19 issues. The Cavaliers spent seven days in quarantine, using virtual meetings to prepare for the matchup with Ohio.

Bennett and company just arrived on Friday, and now they are heading out once again.

Some familiar problems showed up again for the Cavaliers, who struggled to score during a key stretch in the second half and shot 35% from the field for the game. Virginia famously lost to No. 16 seed UMBC in the first round in 2018, but it used the setback as motivation in its run to the championship in 2019.

After last year’s NCAA Tournament was canceled because of the pandemic, the Cavaliers (18-7) became the first defending champion to lose in the first round since UConn in 2012.

Preston and Ben Vander Plas, the two stars of Ohio’s surprising Mid-American Conference Tournament run, were back at it.

When it was over, Vander Plas raced over to give Bennett a hug. Vander Plas’ father, Dean, played college ball with Bennett.

Preston made big play after big play, finishing with 11 points, 13 rebounds and eight assists. Lunden McDay sealed the victory at the free-throw line in the closing seconds..

Ohio (17-7) has now won its last three NCAA first-round games — beating Georgetown in 2010 and Michigan in 2012. And even though the seats inside were mostly empty at Assembly Hall, the Bobcats reveled in the celebration on the court — and the one they heard about on their home campus.

“Obviously, it’s a huge win, being the 13 seed coming out and getting a win in the NCAA Tournament is big.” Vander Plas said. “I’m just really thankful we’re able to get a win (the fans).”

Next up is for the Bobcats is No. 5 seed Creighton on Monday.

Sam Hauser had 15 points and nine rebounds for Virginia, which won the ACC regular-season title before the COVID-19 test ended their hopes of winning the tourney crown.

“The program was quarantined for seven days after the positive test, they had seven negative tests and came here and tested negatively and haven’t tested positive since then,” Kentucky athletic director Mitch Barnhart said on the telecast. Barnhart is the chairman of the NCAA’s selection committee.

While Virginia controlled most of the first half and looked as if it might pull away when it opened a 38-31 lead, Ohio stormed back. Mark Sears made a layup and Vander Plas connected on two long 3-pointers to give the Bobcats a 45-40 advantage with 6:58 left.

“I know our guys are feeling it right now,” Bennett said. “We had some chances. I don’t know if we got tired down the stretch or felt a little bit of the pressure, but we had some good looks and just had a poor shooting day, a very poor shooting day from 3-point range with some quality shots, but they did a good job defensively.”