Tribe men's hoops is on top of the CAA

Despite a new head coach & several transfers in the off-season, William & Mary has found a way to put it all together and lead the conference. 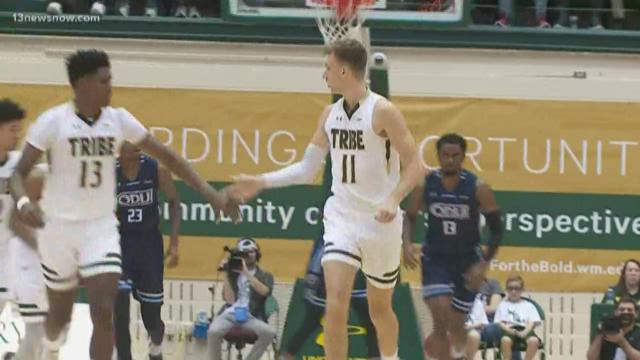 WILLIAMSBURG, Va. — Given how the off-season went for the William & Mary men's basketball team, no one would have thought they'd be in this position. A new head coach in Dane Fischer along with several key transfers, and Tribe could have just considered this a rebuilding year.

Instead they jumped out to a 4-0 start for the season. They're currently 15-6 overall, and with a 7-1 record, they lead the Colonial Athletic Association. Were they surprised? Depends on who you ask. "Yes. Immediately when I met the coaching staff", says Tribe forward Nathan Knight. He was considering the NBA, but decided to come back for his senior year. "Before we even knew we had somebody coming in, I knew this was going to be special.

Knight was right as William & Mary won eight straight road games, which at this time is the longest win streak this season of anyone in the country. Wisconsin transfer, Andy Van Vliet wasn't as convinced. "No honestly I wouldn't have." There were still plenty of question marks, but he eventually saw the possiblities. "You've just got to keep playing great and play with the same intensity."

Now that they've gotten all that attention, there's the matter of what's to come. The Tribe is one of four original Division I schools that have never been to the "Big Dance". For now, Fischer wants to pump the breaks about the possibilities. "I told the guys that we can't go to the NCAA Tournament right now. So let's not worry about that. Let's just keep getting better and put ourselves in the best position we can for when that time is upon us."