As the cost of college and the average student loan debt continues to rise, trade careers are becoming more popular, viable and profitable. 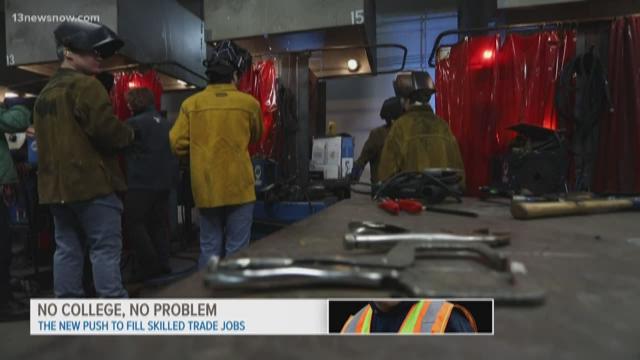 "In Hampton Roads, there's an increasing demand for these positions," said David Swanger, the center's director. "Students have well-paying job offers just waiting for them as soon as they graduate."

Bureau of Labor Statistics data shows that between 2015 and 2018, employment in Hampton Roads grew by at least five percent in these fields: Shipbuilding, Construction, Manufacturing, Transportation/Utilities, and Warehousing. Most of these industries have seen a steady rise in employment since 2012.

More Info: Employment data from the Bureau of Labor Statistics

From high school courses to two-week training crash courses to apprenticeships for shipbuilding and other in-demand fields, workers said they're attracted to the hands-on field of skilled trades.

“Knowing that there is such a demand for welders and talent in this industry, it’s secured my love for this and I’ll probably do this for the rest of my life," said Zack Cheney, a high school junior in Virginia Beach.

Cheney is part of a welding program at the Virginia Beach Career and Technical Education Center. His classmate, Amiya Islam, said she enjoys the tangible, hands-on training.

“Knowing that I would have my hands on some metal and working with metal, that’s the part that got me," Islam said. "I did like the thought of being able to do something that was needed."

The Center's director, David Swanger, said he can't keep up with workforce demand, even as the number of applications from students grows each year. Currently, 702 students are enrolled, and Swanger also attributes that to the threat of college debt.

“Folks that graduate from college one they’re drowning in college debt and finding jobs that weren’t necessarily related to what they were majoring in and not making very much money," Swanger said.

The Institute for College Access and Success reports the average student loan debt for a 4-year degree in Virginia is now more than $30,000. Tuition across Virginia schools has increased by about 5 percent each year for the past 10 years.

Without a national solution to make college more affordable, more workers are turning to the trades.

Tidewater Community College offers a 2-week sheet metal crash course as part of its skilled trades academy. Completing the training gives workers a pay raise and a job with Newport News Shipbuilding - at no cost to the students.

“You can take this anywhere, wherever your career goes," said trainee Aponte Ballard. "It’s a career builder for you.”

Marcy Camacho is another sheet metal trainee. She said she didn’t expect to take this route, but she’s enjoying the hands-on work.

“I’m a Navy wife, I have two children, I don’t want to have to rely on my husband for everything, being able to help financially with bills.”

Ballard plans to apply to the Apprentice School in Newport News, where he’d earn about $18 an hour and receive free schooling and training. It would be another mostly debt-free option.

McCane said 18-year-olds tell her that the ability to make money right out of high school, while still training for a future career, is one of the main selling points for apprentice programs.

In Virginia Beach, it's something Cheney researched.

“You have a lot more than just college that you can do," he said. "The ability to learn a trade and then go on with your future making money right out of high school, it’s a lot of money to be made for something that you might very well love doing.”

RELATED: 157 apprentices graduate from The Apprentice School in Newport News