The National Science Foundation released the highest resolution image of the sun's surface which 'reveal unprecedented detail' and marks a new era of solar science. 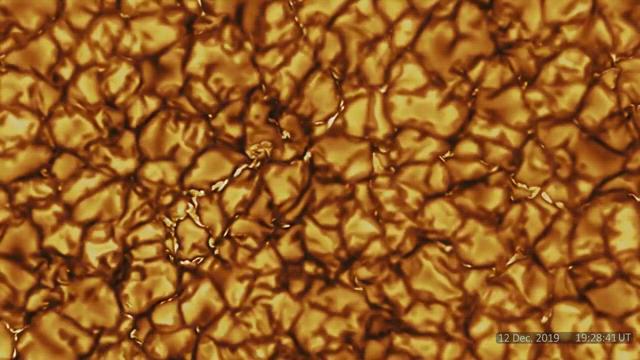 The world's largest solar telescope has given the world a glimpse at the most intricate details of the sun's surface.

The National Science Foundation released the highest resolution image of the sun's surface on Wednesday which "reveal unprecedented detail" and marks a new era of solar science to better understand the sun.

"The images show a pattern of turbulent 'boiling' plasma that covers the entire sun. The cell-like structures -- each about the size of Texas -- are the signature of violent motions that transport heat from the inside of the sun to its surface," NSF explained about golden details in the image in a press release. "That hot solar plasma rises in the bright centers of 'cells,' cools, then sinks below the surface in dark lanes in a process known as convection."

RELATED: NASA solar probe traveled closer to sun than any other spacecraft. Here's what it found

The Daniel K. Inouye Solar Telescope, a four-meter solar telescope that captured the never-before-seen close-ups, is situated on the island of Maui, Hawai’I and focuses on the sun’s explosive behavior in the solar atmosphere.

"NSF’s Inouye Solar Telescope is able to map magnetic fields within the sun’s corona, where solar eruptions occur that can impact life on Earth,” NSF Director France Cordova said in a statement. “This telescope improves our understanding of what drives space weather and ultimately help forecasters better predict solar storms."

The photo and the technology behind it, according to the NSF, can also help scientists better understand the impacts of the earth's nearest star.

Credit: NSO/AURA/NSF
The National Science Foundation's Inouye Solar Telescope images show the sun in more detail than ever seen before. The telescope can image a region of the sun 36,500 km wide. Close up, these images show large cell-like structures hundreds of kilometers across and, for the first time, the smallest features ever seen on the solar surface, some as small as 30km.

"On Earth, we can predict if it is going to rain pretty much anywhere in the world very accurately, and space weather just isn’t there yet." Matt Mountain, president of the Association of Universities for Research in Astronomy, which manages the Inouye Solar Telescope said in a statement. "Our predictions lag behind terrestrial weather by 50 years, if not more. What we need is to grasp the underlying physics behind space weather, and this starts at the sun, which is what the Inouye Solar Telescope will study over the next decades."

RELATED: As NASA retires Spitzer telescope, a look back at some of its most incredible cosmic images

David Boboltz, one of the program directors in NSF's division of astronomical sciences who oversees the facility’s construction and operations called these first images "just the beginning."

"Over the next six months, the Inouye telescope’s team of scientists, engineers and technicians will continue testing and commissioning the telescope to make it ready for use by the international solar scientific community," he said. "The Inouye Solar Telescope will collect more information about our sun during the first five years of its lifetime than all the solar data gathered since Galileo first pointed a telescope at the sun in 1612."