Part 1 of 13News Now's 'Saving the Bay' series takes a look at the overall state of the Chesapeake Bay. 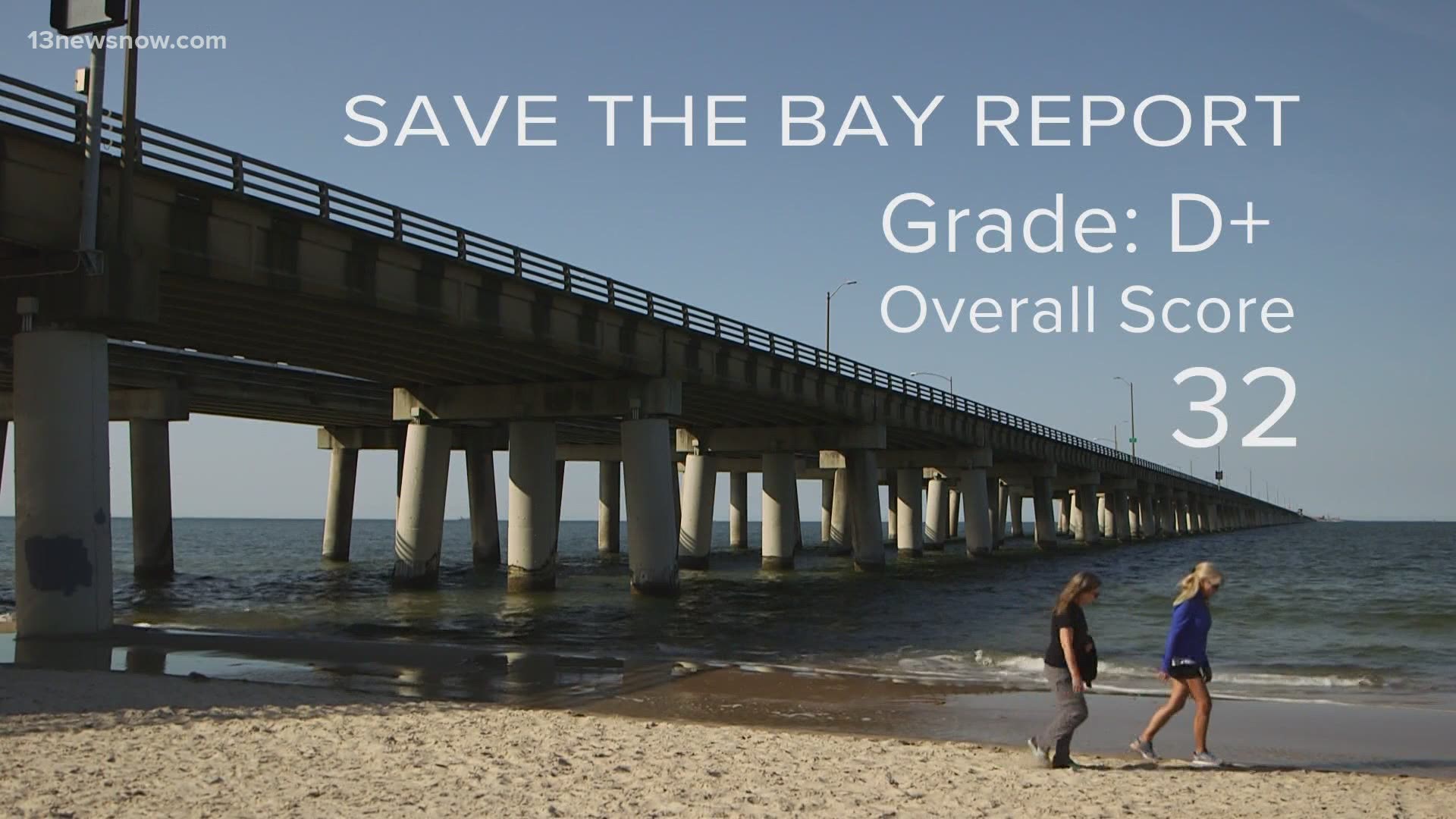 VIRGINIA BEACH, Va. — By land and by water, the Chesapeake Bay defines the culture and way of life in America’s mid-Atlantic.

Nestled between the borders of Virginia, Maryland, and D.C., it is the largest estuary in the United States, a combination of both freshwater from local rivers and saltwater from the Atlantic Ocean.

“It’s the place you came home in the summertime, in a lot of cases they [people] have their fondest memories in the boat or along the bay," said Chris Moore, senior scientist with the Chesapeake Bay Foundation.

Nearly 18 million people live near -- and are affected by -- the Bay's watershed, including hundreds of thousands of people in Hampton Roads. The mouth of the Bay lies between Cape Charles on Virginia's Eastern Shore, and Cape Henry on the north end of Virginia Beach.

The beauty of the bay is clear, even if environmental scientists are concerned that its future is less so.

Thirteen different environmental factors, across three categories, contribute to the Bay’s grade: pollution, habitat, and fisheries. In 2020, the Bay received a “D-plus” grade, with an overall score of 32.

“This is something that’s not great but not the worst it can be. A D-plus says, 'Okay we’re improving, but we’re dangerously out of balance,'" Moore said.

Here's the breakdown of the environmental factors:

Many of the environmental factors are interconnected, like low grades for nitrogen and phosphorus contributing to a "failing" grade for water clarity in the Bay.

“We have way too much nitrogen, phosphorus and sediment basically in our waterways, and that creates cloudy conditions during the summertime," Moore said.

According to Moore, the average 3-inch oyster can filter roughly 50 gallons of water per day in the summertime, meaning higher oyster populations can lead to cleaner water everywhere.

Despite a two-point increase from the 2018 State of the Bay report, oysters still received an overall "failing" score as well in 2020.

It's why the foundation, and many organizations along the watershed, have committed to large-scale local oyster restoration efforts over the last several decades. The Chesapeake Oyster Alliance, a coalition of environmentally conscious businesses, organizations, and non-profits has committed to putting 10 billion oysters back in the bay by the year 2025.

“They clear our waterways, eating some of that excess pollution but creating spaces for other animals to live as well," Moore said.

According to the Chesapeake Oyster Alliance, Maryland and Virginia's economies lost $4 billion in the last three decades because of declining oyster populations.

The Alliance also cites that it would take more than a year for the current oyster population to filter the entire Chesapeake Bay, a task that could once be done in just a week.

The Chesapeake Bay's environmental status matters most in a larger context. Six Bay states and Washington DC have agreed to the "Chesapeake Clean Water Blueprint" to set pollution limits and a roadmap for a cleaner bay by the year 2025.

Progress has been made over time, but slowly.

The first State of the Bay report published in 1998 gave the Chesapeake Bay an overall score of 27, meaning the score has only increased by five points in the span of two decades.

With a target score of 40 by the year 2025, the most recent State of the Bay serves as a reminder that the deadline is fast approaching, and scientists say local conservation efforts throughout the mid-Atlantic have never been more important.

“We don’t want to get to a point of Bay restoration where it’s so degraded, so expensive, so hard to do, that it’s written off," Moore said. "You get to a point of diminishing returns, if you make so many changes on the land and watershed as a whole, you may not be able to recover."

In 2020, the Chesapeake Bay Foundation sued the Environmental protection agency to ensure the enforcement of the "Clean Water Blueprint."