VERIFY: Are live crabs really being dumped at Maryland landfills to drive up prices?

A viewer heard crabs were being dumped to keep prices higher, as the peak crab season is coming to a close, the Verify team got cracking on this one. 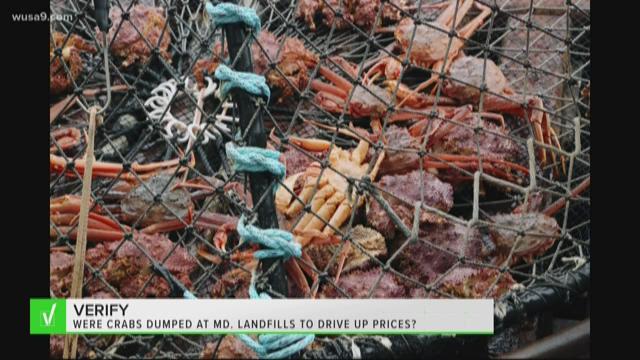 Are live crabs really being dumped at Maryland landfills to keep prices higher?

No, officials from the Maryland Department of Natural Resources determined the crabs were dead when they arrived at the landfill.

A viewer from Hagerstown, Maryland asked the Verify team to find out if a claim made in a viral post is real or not.

The post claims over 200 bushels were going to waste, being dumped by “crabbermen” at the Ridgley and Anne Arundel landfills.

So, first, here’s a couple of basics on crab prices.

Dr. Tom Miller at University of Maryland's Center for Environmental Science said when it comes to the crab market, it's all about supply and demand. If water-men have fewer crabs, demand drives prices up.

Crab prices are also higher during peak season, July and August, and can cost anywhere from $120 to $150 dollars a bushel.

Also, crabbers get a premium price for crabs around holidays, like upcoming Labor Day.

Next, we reached out to the Maryland Department of Natural Resources government agency.

A public affairs officer said after investigating the claim and going to the landfills where the crabs were, one of their biologists concluded the crabs seen in the photo were not discarded to hike up the prices.

The biologist said it’s likely someone bought crabs from the south, like Louisiana, Florida or the Carolinas where crabs are plentiful, trucked them up to Maryland to sell but the crabs died in route and had to be dumped.

The spokesperson said their team scrutinized some of the other dead crabs in the sump or on the side of the road from the photos that were circulating and said those crabs had been packed in wooden crates which are a tell-tale sign of Southern packed crabs.

An official from the MDNR’s Blue Project Lead backed this up saying she highly doubts live Maryland crabs were purposefully discarded but rather a massive dead loss, not surviving the transit process.

So, we can verify, no, this viral post claiming crabs were purposefully dumped in landfills to keep prices higher is false.

However Maryland Department of Natural Resources clarified, there is no law or regulation against discarding live crabs.

RELATED: Number of blue crabs in Chesapeake Bay up 60% from last year