SCIENCE BEHIND: What happens when a star gets too close to a Black Hole?

The gravity from the Black Hole is so strong that the difference between the front end and the back end of the star – it rips it apart. 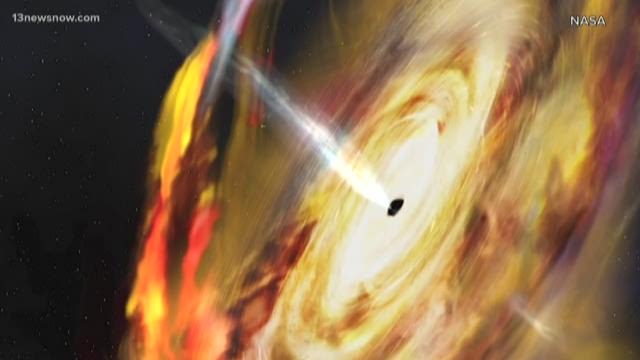 It's not every day that you hear about what happens when a star gets too close to a black hole.

If a star gets too close to a black hole, just say "buh bye."

"What happened was the gravity from the black hole is so strong that the difference between the front end and the back end of the star – it rips it apart," says Tom Holoien of Carnegie Observatory.

For a little bit of background, "a black hole is an object that's so large and so dense that nothing can escape from it, not even light. That's why it appears black - because of the tremendous amount of gravity.

Black holes can form from old stars that collapsed in on themselves.

So when a star gets too close to a black hole, that extreme gravity actually stretches the star.

The materials within the star stretch out and the materials get hotter and thus brighter while circling the black hole.

This event doesn't happen often, but by a stroke of luck and a drop of science, NASA and its partners caught the event on camera, "so the really cool thing about this is that since this part of the sky was already being looked at by TESS when it went off, we saw exactly when it started to get brighter and how it started to get brighter so this can tell us more about the black hole itself."

This particular black hole is what's called "supermassive" as it has a mass of 6 million times that of our sun.

So what does that even mean? Holoien lets us all know that "this is a large one but certainly not the biggest out there."

But if you are concerned—neither this black hole nor the one in our own galaxy is a threat to us.