Man killed in crash involving tractor-trailer on the Western Freeway

The crash happened on the eastbound Western Freeway (VA 164) at College Drive, just before 3 a.m. That's about a half-mile from the Town Point Road exit. 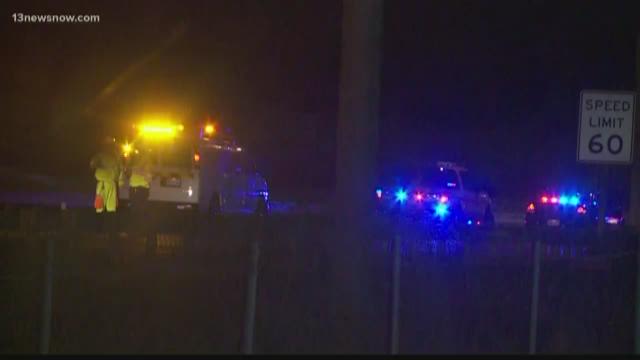 PORTSMOUTH, Va. (WVEC) -- A Newport News man was killed in an accident involving a tractor trailer near the Suffolk-Portsmouth line on Thursday.

The accident happened on the Western Freeway (VA 164) at the College Drive exit, just before 3 a.m. That's about a half-mile from the Town Point Road exit.

Portsmouth police said the front of the victim's Kia Sorrento struck with the rear corner of the tractor-trailer, causing the vehicle to spin out of control and crash.

The driver of the Sorrento, 52-year-old Albert D. White, was not wearing a seatbelt and was ejected from his vehicle. Medics pronounced White dead at the scene.

The driver of the tractor-trailer was not injured and remained at the scene.

Eastbound lanes of the Western Freeway were shut down for more than seven hours as police investigated.

UPDATE-> The fatal crash VA-164 EB between College Dr and Town Pointe Rd involves a tractor trailer and a car; the driver of the CAR has died. No other injuries reported. The call came in just before 3am. @13KristinaR has updates throughout Daybreak. #13NewsNow pic.twitter.com/UiuBlzmXuG