Over 3.1 million people in Virginia will be traveling this holiday season with 2.8 million expected to drive. 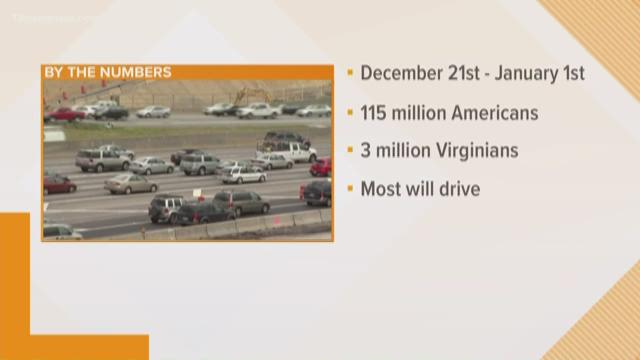 AAA estimates that more Americans will travel his holiday season than ever on record. 115.6 million people will travel from Sunday, December 21 through Wednesday, January 1.

AAA said that is the most in nearly 20 years since the organization started tracking traveler numbers in 2000. It shows an increase of 3.9 percent over last year, or 4.3 million more people will be going away this holiday season.

More than 104 million of those holiday travelers will drive to their destinations and, INRIX, a global transportation analytics company, expects delays to be the worst on Thursday, Dec. 26, with afternoon delays reaching nearly double congestion-free drive times in major U.S. cities.

Over 3.1 million people in Virginia will be traveling this holiday season with 2.8 million taking to the roads.

RELATED: Tips on how to deck the halls safely

“Holiday cheer is at an all-time high this year, with unemployment at historically low levels, and noted improvements in both disposable income and household net worth,” said Georjeane Blumling, vice president of public affairs for AAA Tidewater Virginia. “Travelers are likely getting used to crowded highways and airports, as this marks the eighth straight year of new record-high travel volumes for the year-end holidays. They will need to pack patience along with the packages for the journey.”

AAA predicts more Americans will drive this year than in previous years. Here's the break down of expected travelers and their form of transportation:

RELATED: These outfits could get you kicked off a flight