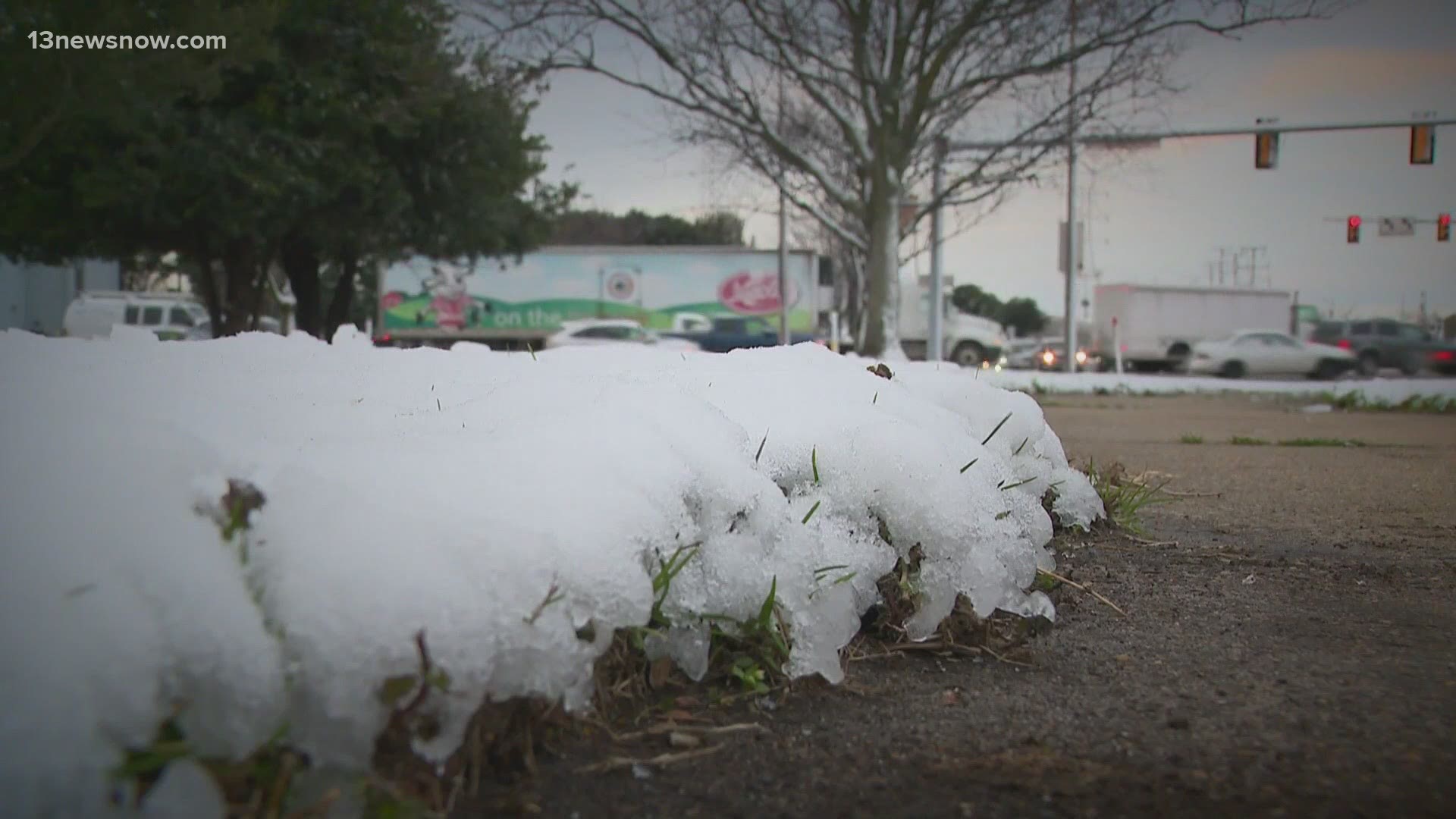 NORFOLK, Va. — The Winter Solstice is over a month away, but Mother Nature may already be tipping her hand with early signals about what we can expect over the coming months.

Just as the beautiful autumn colors and falling leaves remind us colder days are coming, there are a number of things we look at around the world now, that can indicate what kind of winter we have in store.

And we're not looking into weather lore… things like persimmon seeds, wooly worms, or even almanac predictions. Those may be fun to consider, and some folks swear by them!

But right now, let's focus on natural indicators that are measured, researched, and appear to have greater influence on our cold season.

Water temperatures in the Pacific influence global weather patterns, the amount of October snowfall in Siberia, how much Arctic sea ice there is, high and low pressure over the arctic, these all can set seasonal weather patterns in motion.

NOAA's Climate Prediction Center just recently released their official Winter Outlook.  It is calling for this winter to be a bit warmer, and perhaps a bit drier than average for Coastal Virginia and Northeast North Carolina.  But what does this really mean for our snow chances? There is so much more to consider...

The biggest driver behind the weather service outlook is the current "La Nina." This weather pattern has been in place through this past summer and was a big reason the hurricane season was so active.

Jeff Orrock, the Meteorologist in Charge at the National Weather Service in Wakefield explains, "For hurricane season, it means the atmosphere is pretty stagnant and calm."

There is less shearing wind across the tropics, and this allows for more hurricanes to develop and mature.

"Because it is going to remain like that into the winter months, the jet stream is usually not as active, it usually means a drier winter and a warmer winter for a lot of the southeast and the east coast."

When you couple the La Nina with negative amounts of sea ice currently observed over the Barents and Kara Seas, this also favors warm winters for our area.

Dr. Judah Cohen researches the relationship between amount and rate of increase for October snow in Siberia with winters in the eastern United States. More October snow cover in that part of the world has been linked to more cold air outbreaks in our part of the world in the months following.  He reports this year's snow cover is slightly above average, but closer to normal.

We also look for "blocking patterns" over Eurasia during the late fall. These weather features can slow westerly winds circulating the Arctic and allow colder air to spill south.  This fall there was some blocking, but that has gone away.

While these things currently point to a less active, generally milder and drier winter season, blasts of Arctic air and heavy snows are still very possible.

"In our area we probably average 12 to 15 coastal storms every season.  So you may decrease that number a little bit, but it's still a matter of timing and if you get a coastal storm or two to come up at the same time you've got cold air in place, it just takes that one and all of a sudden we can get a good snow event out of it.

Weather patterns like the Arctic Oscillation are more variable and have a greater impact on such cold outbreaks and snow chances.

When the Arctic Oscillation is "positive," pressure is lower over the Arctic. Westerly winds are stronger, and the cold air is trapped farther north.  This condition supports the milder winter conditions in our region.

And when this oscillation goes "negative?" Look out!  High pressure builds over the Arctic, the westerlies weaken and colder Arctic air can seep farther south and into the mid-Atlantic.

Snow-making is "open for business!"

Orrock looks back at some La Nina winters to show this can happen:

"We got around two feet of snow in Hampton Roads in the 1988-1989 winter. If folks remember back to the big blizzard we had 2017-2018, it locked up Hampton Roads really really good.  We had about 15 inches of snow that winter. And if folks remember back even farther, we had a Christmas evening and Christmas day kind of snow in 2010.  A lot of snowfall, kids were loving it, parents maybe not so much."

So here's the bottom line: the larger seasonal indicators suggest that the relatively warm fall we've experienced will likely continue this winter.  With temperatures likely to be slightly warmer than average, we may be able to save a little on heating costs this winter.

But don't drop your guard! There will still be chances for a few Arctic blasts, and if history repeats itself, a well-timed coastal storm or two could have us digging out from heavy snow.