Members of the National Guard are still on Ocracoke Island helping people to recover, as well as providing food, water, and shelter. 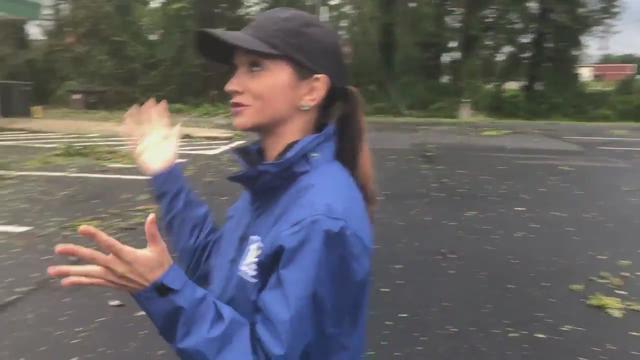 North Carolina Governor Roy Cooper spoke Saturday afternoon about the next steps now that Dorian has left the Carolinas.

Saturday, Cooper went to Ocracoke Island, which was among the hardest hit by Hurricane Dorian. A search and rescue team is going to door to door, but Cooper said they don't currently believe there were any Dorian-related deaths or serious injuries on the island.

"They're pulling together and getting through this," Cooper said.

People in Ocracoke were somewhat in a state of shock, Cooper said, from the significant storm surge that came in.

The governor acknowledged the flooding and wind damage that has impacted the state, but said he believes the state will come together.

"In North Carolina, we're going to pull together and we're going to work to begin clean up and try to get back to normal as soon as possible," Cooper said.

Cooper said most of those without power still are in Dare and Hyde counties. He went to Emerald Isle to the RV park hit by the tornado Saturday morning to survey the damage.

"It was amazing that no one was hurt or killed at this RV park," Cooper said.

Cooper confirmed that there have been two known deaths in North Carolina related to the hurricane -- a man from Pamlico County, 67 years old, died Friday as a result of falling off a ladder in preparation for the storm, Cooper said.

The governor also thanked first responders and volunteers for their work. Members of the National Guard are still on Ocracoke Island helping people to recover, as well as providing food, water, and shelter.

Officials are assessing damages to determine if there will be a request for a federal disaster declaration, according to Cooper.

"People are pulling together to help each other, just as you'd figure North Carolinians would," Cooper said.