CHARLOTTE, N.C. — Hurricane Dorian is a dangerous hurricane moving along the Southeast coastline. This is a live blog from the digital staff at WCNC.com with continuous updates on the storm, its impact, and on-going developments.

Hurricane Dorian is still battering North Carolina's Outer Banks with hurricane-force winds. The NHC reports the Category 1 storm is now picking up speed and moving 21 mph towards the northeast. Dorian is about 125 miles northeast of Cape Hatteras and about 400 miles south-southwest of Nantucket Massachusetts.

The Canadian Hurricane Center has issued a Hurricane Warning for eastern Nova Scotia from Hubbards to Avonport.

Homes are continuing to flood along the Outer Banks of North Carolina following dangerous storm surge from Hurricane Doran.

"We're going in the attic, and we'll be in touch as soon as we can. We love you all. We love you very much," Susie Fitch Slater said to her family from her flooded home on Ocracoke Island.

South Carolina Governor Henry McMaster is scheduled to arrive in Conway, South Carolina at 1 p.m.. He was also visit Georgetown around 3:30 p.m.

A NOAA station at Oregon Inlet, North Carolina reports sustained winds of 74 mph and a wind gust of 92 mph. The storm is causing life-threatening storm surge and flooding in coastal areas.

The National Weather Service predicts Hurricane Dorian produced about 13 tornadoes as it ripped through the Carolinas Thursday. The official number will still need to be confirmed. 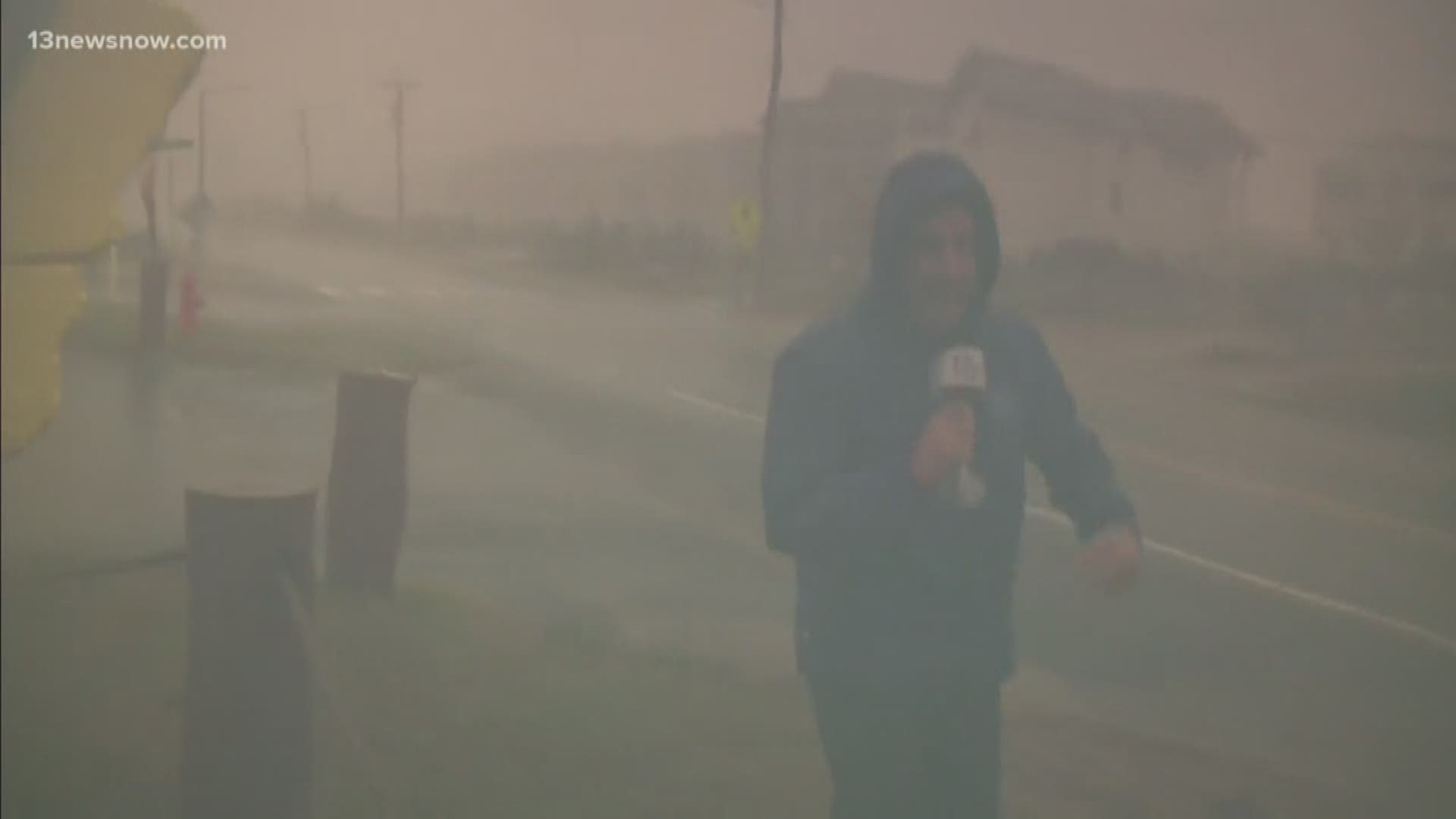 "Holy Guacamole!" The winds pick up in Nags Head in the Outer Banks as Dorian lashes the coast .

"There's still a high risk of flash flooding in eastern North Carolina. Don't drive on roads covered in water," Gov. Cooper said. "Barricades on roads are there for your safety, don't drive around them. Don't put your life or the lives of first responders in danger."

Not much has changed with Hurrican Dorian's track path and strength. The storm is still packing sustained winds of 90 mph and is moving NE at 14 mph. The storm is about 30 miles West-Southwest of Cape Hatteras, North Carolina.

North Carolina DOT reports that 73 roads are closed due to Dorian. Of those closures, 17 are considered primary roads.

North Carolina reports 179,211 power outages statewide. The majority of those outages are in Carteret and Brunswick counties.

The eye of Dorian passes just east of Cape Lookout. Hurricane-force winds are reported in the southern Outer Banks.

Dorian is now about 30 miles south-southwest of Cape Lookout, North Carolina. The eye of the storm will move very close to land for the first time and there could be an official landfall Friday morning. Sustained winds are still at 90 mph.

As of 2 a.m. Friday, Dorian is a Category 1 hurricane with sustained winds of 90 mph. The center of Dorian is expected to move over or near the North Carolina coast during the next several hours, and the center should move to the southeast of "extreme southeastern New England" after.

Dorian is forecast to become a post-tropical cyclone with hurricane-force winds by Saturday night.

At 1 a.m. Friday, Dorian was a Category 1 hurricane with sustained winds of 90 mph as it spun about 40 miles east-northeast of Wilmington, North Carolina. According to the National Hurricane Center, tropical storm conditions are spreading quickly northward along the North Carolina Coast. 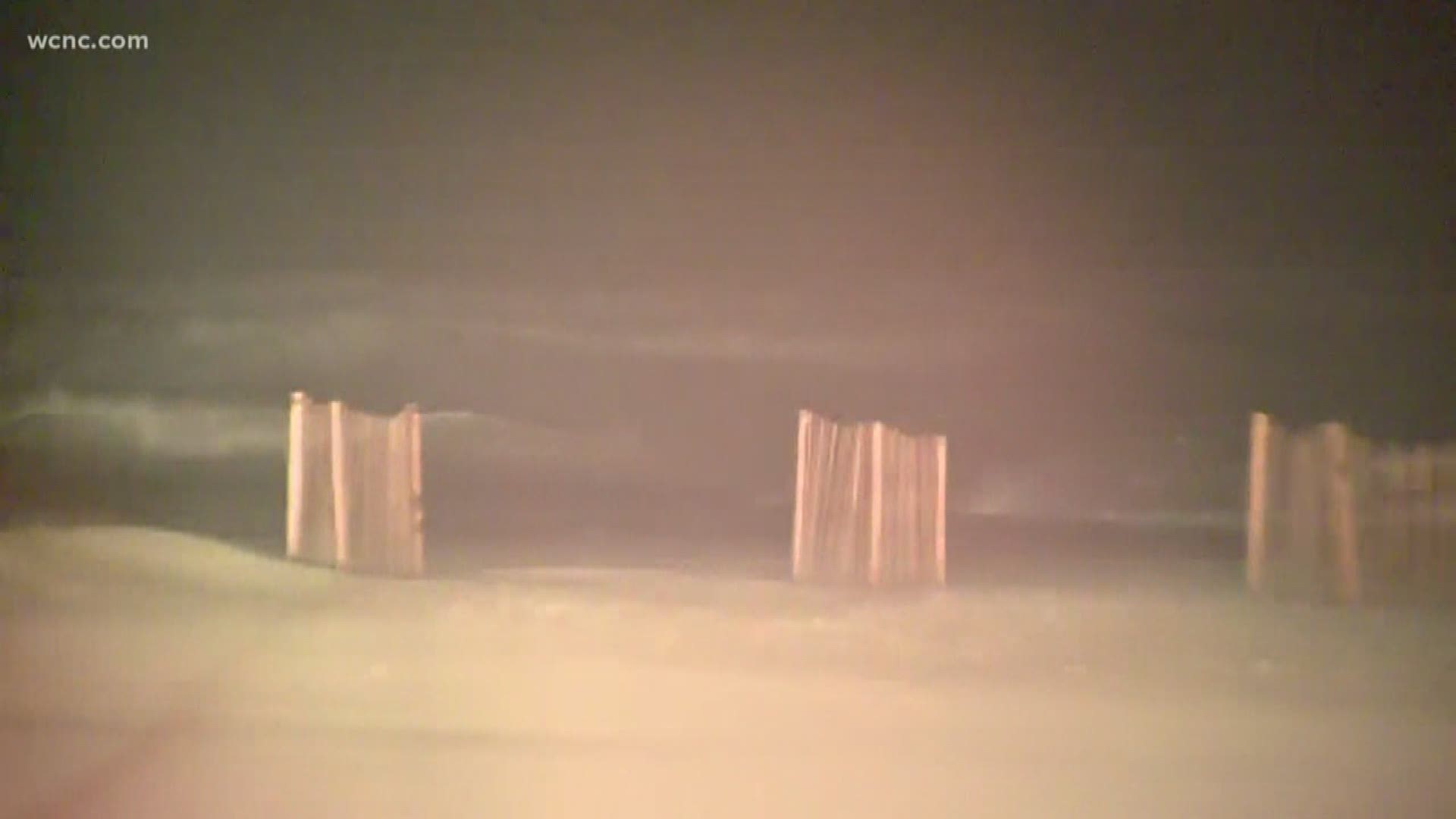 Overnight winds will cause trees and branches to fall on power lines, and debris could block repair crews from accessing damaged lines, according to Mike Burnette, senior vice president of Electric Cooperatives in North Carolina. Customers should prepare for prolonged power outages, he said.

Officials in the Bahamas say the county's death toll from Hurricane Dorian has increased to 30.

The National Weather Service says the latest radar indicates Dorian is just southeast of Cape Fear and will track very close to Cape Lookout around sunrise Friday, then northeast near Cape Hatteras before exiting out to sea Friday afternoon.

The worst weather from Hurricane Dorian is lashing parts of southern North Carolina.

Southport posted on Twitter that the city of 3,700 lost power as wind gusts approaching hurricane force in the storm's northern eyewall brushed by.

A buoy at Frying Pan Shoals, North Carolina measured sustained winds of 54 mph and a gust to 78 mph.

Anson County Schools will be on a 2-hour delay for students and staff on Friday due to potential storm damage.

A tornado watch is issued for parts of North Carolina and Virginia until 7 a.m.

Eight tornadoes have been reported from Wayne to New Hanover counties in North Carolina. No injuries or fatalities were reported.

Charlotte Motor Speedway officials said nearly 70 campsites are occupied by 150 people impacted by Dorian. Many are from the Wilmington area.

More than 233,000 power outages are being reported by South Carolina Emergency Management.

At the news conference, meteorologist Katie Webster said conditions will deteriorate Thursday night and into early Friday. Conditions will begin to improve Friday afternoon and evening across the state.

At a news conference, Gov. Cooper said 68 shelters were open with 2,200+ people in them. More than 500 National Guard soldiers had been activated. Parts of the state near Wilmington had 9-inches of rain and tornadoes.

Much of southeastern Virginia is shutting down as Hurricane Dorian churns up the Atlantic Coast.

Virginia Beach officials announced mandatory evacuations Thursday for the community of Sandbridge. The strip of land is home to beach houses that sit along the Atlantic Coast near the North Carolina border.

Voluntary evacuations were also encouraged in flood-prone areas in the coastal city of nearly 500,000 people.

Georgetown County officials said in tweet Thursday afternoon that fire and EMS services had been called off "until wind speeds subside to a safe level."

Officials also noted that anyone who called 911 during the suspension would be put on a waiting list.

"An enhanced risk of severe weather is expected through this afternoon and into the overnight hours for eastern North Carolina. The primary threat is tornadoes," The National Weather Service tweeted.

No one will be able to enter one Outer Banks county in North Carolina as Hurricane Dorian approaches.

Officials said there'll be no access to Dare County starting at 8 p.m. Thursday. In addition, curfews begin in most of the county at 8 p.m. and continue until at least noon Friday. No curfew is in effect in Kitty Hawk.

An SUV is abandoned on Myrtle Beach after police said a driver got stuck in the sand Thursday morning. The SUV is dangerously close to being swept out to sea.

The NHC reports Hurricane Dorian is now back to a Category 3 storm with 115 mph sustained winds. The storm is currently 45 miles east-southeast of Charleston, SC.

Brad Panovich said Dorian could make multiple landfalls in North Carolina due to the fact the Capes and Outer Banks stick out.

"Hurricane Dorian is ready to unleash its fury on our state," says Gov. Roy Cooper during a press briefing. Cooper urges everyone to stay off the roads with Dorian hugging the Carolina coastline.

North Carolina Emergency Management shows a statewide power outage total of 3,147. The majority of those outages are in Brunswick and New Hanover counties.

Numerous roads in Charleston are underwater as Dorian dumps heavy rain along the coast. Trees and power lines have also been knocked down during the storm. In Dorchester County, emergency crews have been pulled from the roads until the storm passes. Over a dozen roads in Berkeley County are closed due to storm damage.

The NWS has issued a Tornado Watch for parts of eastern and central North Carolina until 7 pm. There have been confirmed touchdowns already Thursday mornings.

Hurricane Dorian is now moving north-northeastward, according to the National Hurricane Center. The center is about 70 miles south-southeast of Charleston with sustained winds of 115 mph. Tornado warnings are now in effect along the Little River in South Carolina.

The National Weather Service posts a video of a tornado in Pender County, North Carolina. The video was shot around 7 a.m.

A Tornado Warning is issued for southern North Carolina, including Wilmington, Murraysville and Myrtle Grove. Multiple other tornado warnings have popped up along the coast.

The Charleston County Sheriff's Office reports downed trees, power lines and flooded streets. "Do not leave your home unless your life is in danger," the sheriff's office tweets.

Dorian is now 80 miles south-southeast of Charleston. It has 115 mph sustained winds and is having a major impact on the coast.

A Twitter user posts a video of people kayaking down Ashley Avenue in Charleston, South Carolina.