The evacuations and lane reversals begin Monday across the entire coastline of South Carolina. 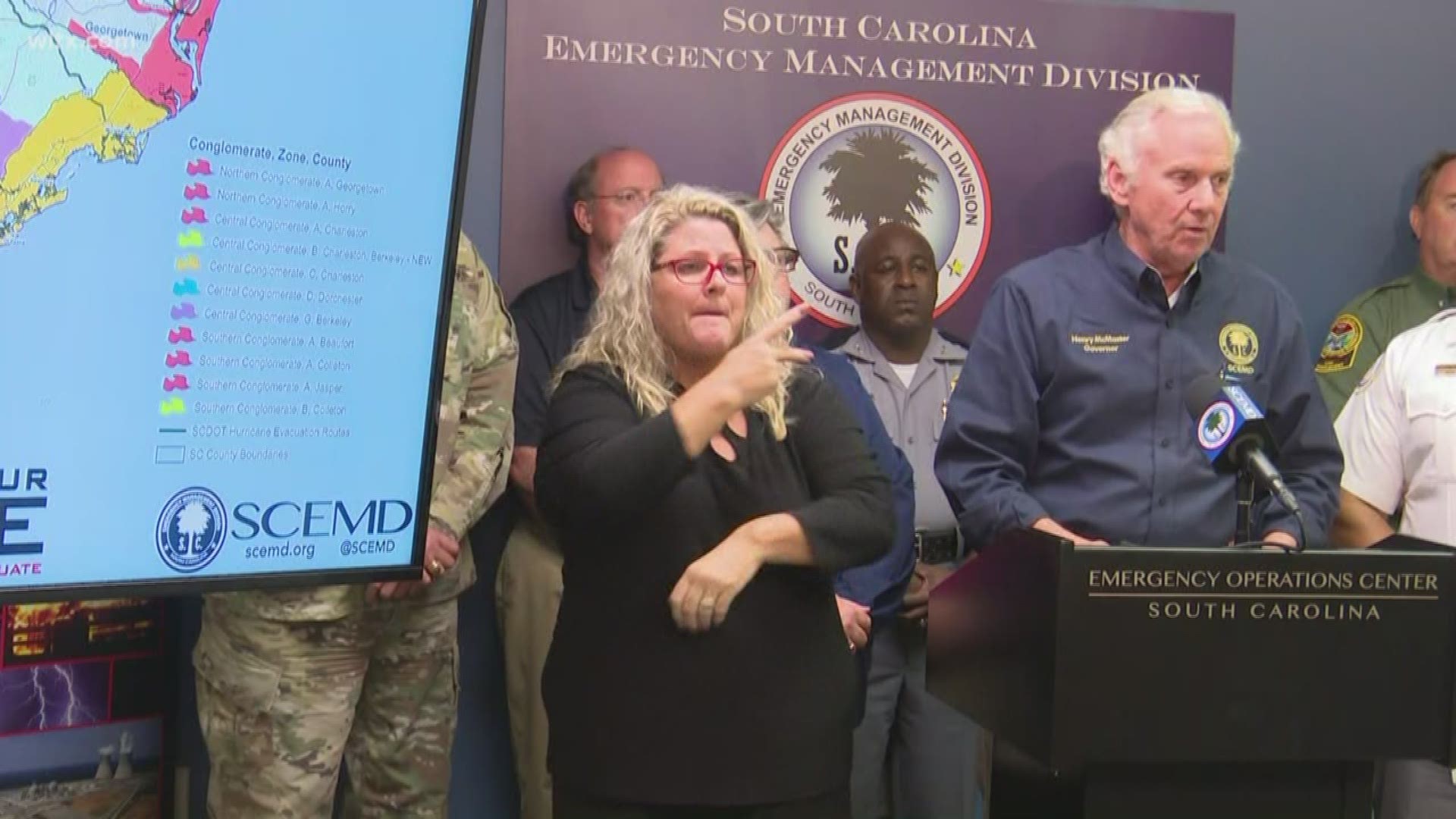 WEST COLUMBIA, S.C. — South Carolina Gov. Henry McMaster has issued mandatory evacuations for people living along the entire coastline of South Carolina,  as Hurricane Dorian is expected to affect the state by midweek. There will also be school closings, and a lane reversals of Interstate 26.

STAY UP TO DATE: Download the WLTX app: Android | iPhone and sign up for the WLTX Daily Dive Newsletter.

McMaster announced the evacuations Sunday night at a news conference at the South Carolina Emergency Management Division. The move affects roughly 830,000 people in the state.

In addition to the evacuations, he's planning on shutting down schools in the affected areas too.

"This is a very serious hurricane," McMaster said.

Here are the affected areas by the evacuations, information on school closings, and the lane reversals.

To find out whether they are in evacuation zones, South Carolinians can use the “Know Your Zone” tool on SCEMD’s website. Residents can know their zone instantly using the SC Emergency Manager mobile app, simply by sharing their location.

Evacuation shelter locations will be available on scemd.org and in the SC Emergency Manager mobile app as soon as they are opened.

Evacuees should pack the following essential items in case the evacuation period is lengthy: required medications, adequate clothing and essential personal items. Residents going to evacuation shelters should bring their own blankets, pillows, cots and special food items if they are on restricted diets.

Individuals and families should plan to board pets with veterinarians, kennels, or other facilities in non-vulnerable areas. While pets are not allowed inside Red Cross evacuation shelters, people with animals can take their pets with them to any shelter so volunteers can help them make arrangements.

All other 175 health care facilities -- including 13 coastal hospitals, 25 nursing homes, and 92 assisted living facilities -- should obey the evacuation order.

When shelters open, you'll be able to find a list of the South Carolina Emergency Management Division's shelters page.

At present, no MIdlands schools are closed, but McMaster said due to the evacuations, and the need to use some schools as shelters, that may change.

For an up-to-date listing of closings, see RELATED: From Midlands to coast, classes canceled for Hurricane Dorian

Started at 12 p.m. Monday: Charleston to Columbia - A full, four lane reversal on I-26 in Charleston begins at the interchange of I-26 and I-526. The full reversal continues west until the I-26 crossover to I-77 just outside Columbia in Lexington County. 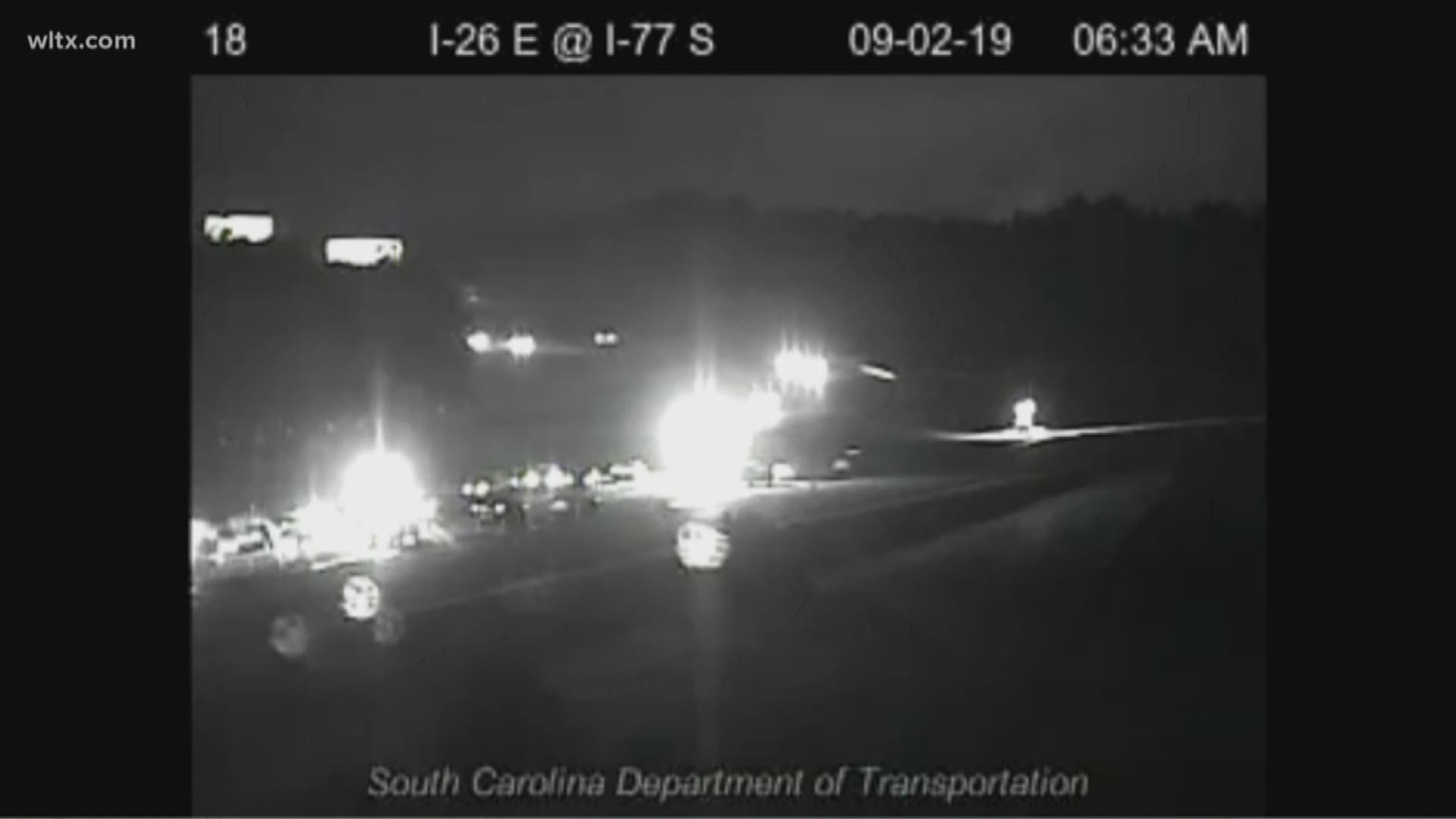 McMaster said multiple state agencies are making preparations to respond to the storm.

Earlier in the day the SCEMD moved to what's known as 'OPCON 1', the highest spot on their three-level rating. That means the state is on "full alert," and all state emergency response team agencies are activated to prepare for any potential effects from Dorian. Their operations center is now fully staffed.

On Saturday,  McMaster issued a state of emergency. The declaration authorizes state and local emergency management agencies to begin mobilizing assets and resources to be staged along the coast

Some of those efforts are already underway. The South Carolina National Guard is preparing to mobilize 1,000 troops, who have been moved to staging area.

STAY UP TO DATE: Download the WLTX app: Android | iPhone and sign up for the WLTX Daily Dive Newsletter.