A week after the remnants of Hurricane Danny spawned several tornadoes, residents saw more funnel clouds forming in the sky! 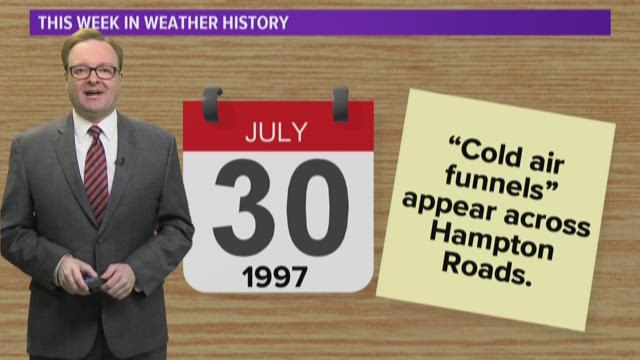 Funnel clouds without thunderstorms?  It's possible, and it happened on July 30, 1997!

A week after the remnants of Hurricane Danny produced several tornadoes in Hampton Roads, residents were on edge when funnel clouds started appearing on what had been a partly sunny Wednesday afternoon.

Calls flooded the station as people started shooting video.  But what residents were seeing were funnel clouds known as "cold air funnels."

Any vortex dropping from a cloud is called a funnel.  Once it reaches the ground, it's called a tornado.

To form, cold air funnels need the atmosphere to be "unstable."  This is a term meteorologists use when we have really warm air at the surface or really cold air higher up in the atmosphere.  This set-up means warm air will rise, and rise quickly, producing bubbling cumulus clouds.

In addition, we need some "spin" in the atmosphere, something we call vorticity.  Large-scale low-pressure centers are too big to produce a funnel cloud, but sometimes smaller eddies can spin up.

Think of the little swirls you see in a flowing river. If one of these eddies gets caught up in an updraft, it will narrow and elongate, causing its spin to get faster and faster, just like a spinning figure skater pulling in their arms.  Once the water vapor in the air condenses, we see the cold air funnel form.

While these types of funnels can look menacing, they are rarely dangerous.

And they definitely got people talking this week in weather history!

RELATED: This Week in Weather History: July 10, 1913 - the hottest temperature ever recorded

RELATED: This Week in Weather History: July 3, the 'Dog Days' of Summer