This Week in Weather History: Tornadoes across Hampton Roads, July 24, 1997

Several tornadoes were reported in Hampton Roads when the remnants of Hurricane Danny roared through. 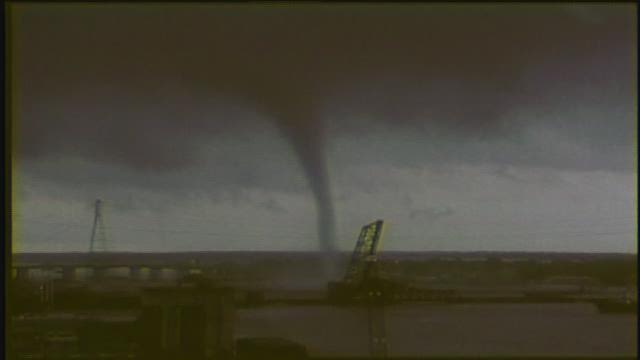 A videographer shooting an interview in Norfolk captured one of the most iconic views of Tropical Storm Danny: a tornado crossing the Elizabeth River in Norfolk. It serves as a reminder that a hurricane that made landfall all the way in Alabama can still bring severe weather to Hampton Roads.

Hurricane Danny was a relatively small storm that came ashore along the Alabama coast on July 19.  From there, Danny quickly weakened as the remnants moved through the southern U.S.

But in a rare move, Danny interacted with a cold front and restrengthened into a Tropical Storm over North Carolina!  Danny emerged over the Atlantic Ocean, near Virginia Beach, and quickly redeveloped winds of 60 mph.

At 1:09 p.m., a tornado touched down in the South Norfolk section of Chesapeake, destroying a car wash and six other buildings.

But it's the video of a tornado crossing the Elizabeth River, near downtown Norfolk, that many people remember.  The video was shot from Dominion Tower.  It shows the twister crossing the river between the railroad bridge and the Campostella Bridge, before dissipating as it reached the other side of the river.

Several windows were blown out in nearby buildings.  Tornadoes were also reported in Hampton, Virginia Beach, and on Knotts Island.

And it all happened, this week in weather history.

RELATED: This Week in Weather History: July 10, 1913 - the hottest temperature ever recorded

RELATED: This Week in Weather History: July 3, the 'Dog Days' of Summer