The tornado caused damage to Colosse Baptist Church and a barn on Rhodes Drive. The Isle of Wight County Sheriff's Office said no one was hurt. 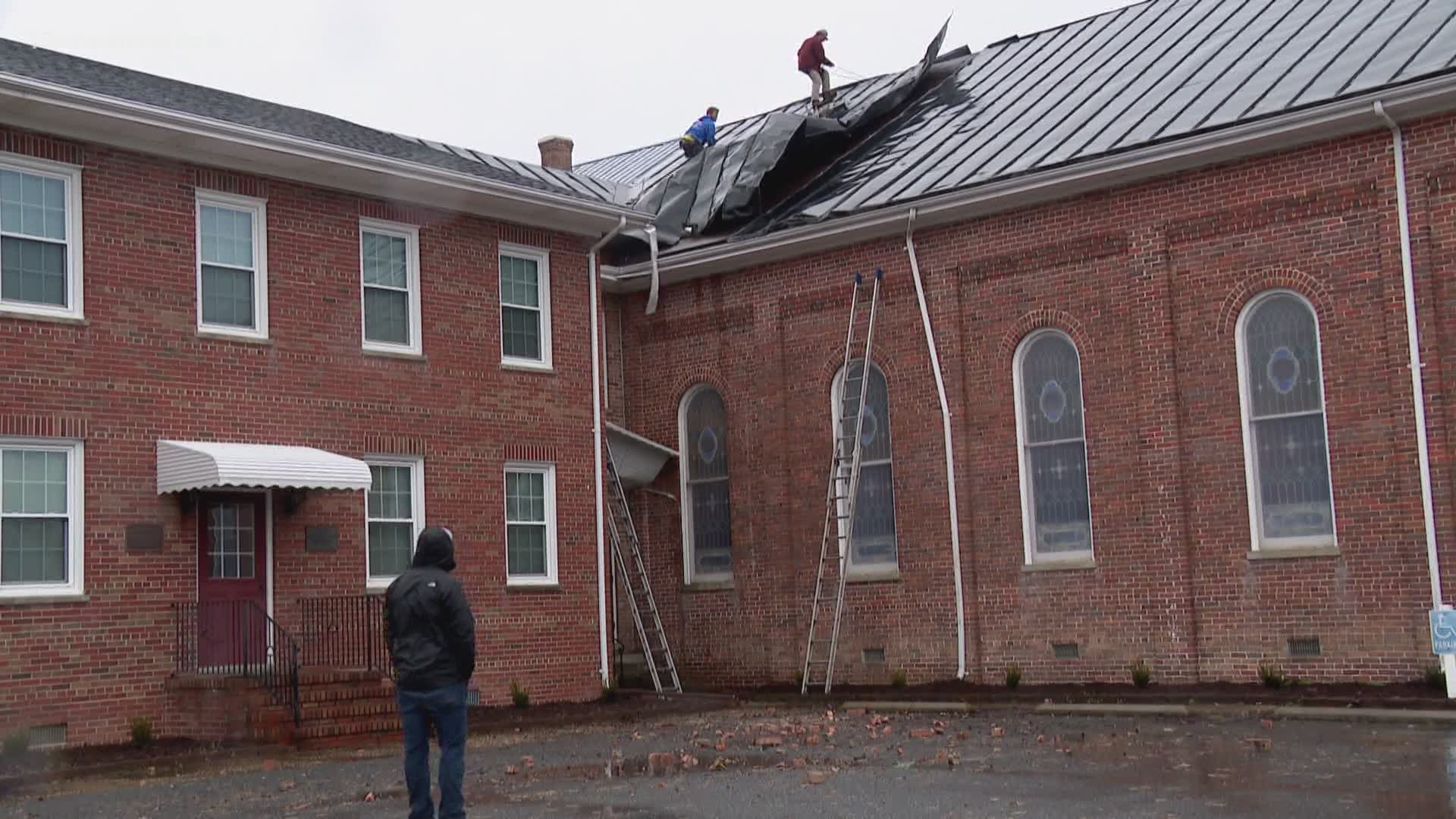 WINDSOR, Va. — The National Weather Service confirmed that at least one high-end EF-0 tornado hit the town of Windsor in Isle of Wight County on Thursday.

The tornado caused damage to Colosse Baptist Church and a barn on Rhodes Drive, according to Jeff Orrock, Meteorologist in Charge at NWS Wakefield.

A rainy day normally wouldn’t be a problem at Colosse Baptist Church, but holes in the roof soaked the sanctuary.

“It sheared off the top part of the roof,” said Pastor Tim Webb. “That is where all this water damage is coming from.”

Pastor Webb said the congregation is used to tricky storms, but in his 18 years there, he’s never seen anything like this.

“It was pretty intense,” Webb said.

“It was a hit-and-run tornado,” Orrock said. “It was there one minute and gone the next.”

Orrock said the twister touched down for about four miles at 85 miles per hour.

“You see snapping trees, you see roof damage,” Orrock said. “Garages start to get blown out.”

Just down the street, Loretta Brown’s garage was torn apart.

“The house started shaking and I could hear it roaring,” Brown said.

She said the tornado passed in a flash around 9:30 p.m. taking parts of her roof and garage right along with it.

“Everything out of here is just in the backyard, in the cow pasture, it’s everywhere,” Brown said.

Fortunately, no one hurt in those few minutes.

“It’s going to be a while before we get back to normal here,” Pastor Webb said.

There won’t be Sunday services at Colosse for a bit, but Pastor Webb said people in the community have already reached out to help clean up.

“It means a lot that they are thinking of us,” Pastor Webb said. “We are going to overcome it.”

An Isle of Wight Sheriff's Office spokesperson said there were no injuries reported. Photos captured by deputies showed some damage to farmhouses along the road.

IOW STORM DAMAGE: @NWSWakefieldVA officials tell us they have someone surveying in Windsor this morning. They are trying to determine if a tornado caused damage to Colosse Baptist Church and the surrounding area. We are headed there now #13newsnow (credit: IOW Sheriff’s Office) pic.twitter.com/9DaJ0sZjWm