It could brush the Carolina coast, resulting in heavy rains. 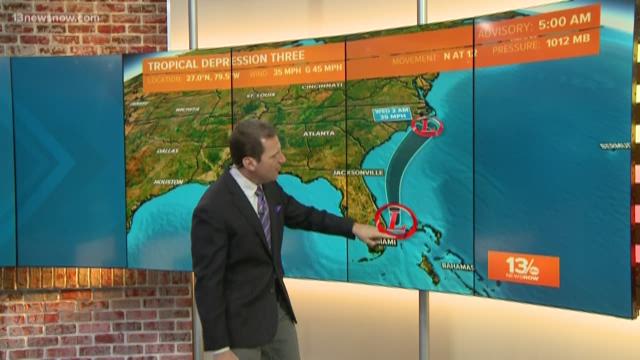 Just before 5 p. m., the National Hurricane Center began issuing advisories on Tropical Storm Three after the cluster of tropical moisture in the Bahamas became better organized around the low pressure. The depression contained sustained winds of 30 mph and was moving northwest at 13 mph.

The National Hurricane Center's official forecast track keeps the center of the storm offshore as it brushes Florida's space coast later Monday into Tuesday. The storm is then expected to interact with a stalled front along the Carolina coast, which will prevent the storm from coming further inland.

Heavy rains and gusty winds are expected Wednesday and Thursday along the Carolina coast.

RELATED: Relief is on the way for Charlotte's ongoing heat wave

Heavy rainfall and localized flooding are a concern with the storm. Coastal communities are expecting to get a soaking rain Tuesday because of the stalled front. The tropical moisture will only add to those rainfall totals.