Dorian turns 'post tropical', here's what else we're watching in the tropics

WASHINGTON — Dorian is now 'post-tropical', meaning it's no longer a fully warm core system. It continues to race on into Nova Scotia and other parts of southeastern Canada Saturday night with still hurricane-force winds and huge waves. From there it will head into the northern Atlantic. 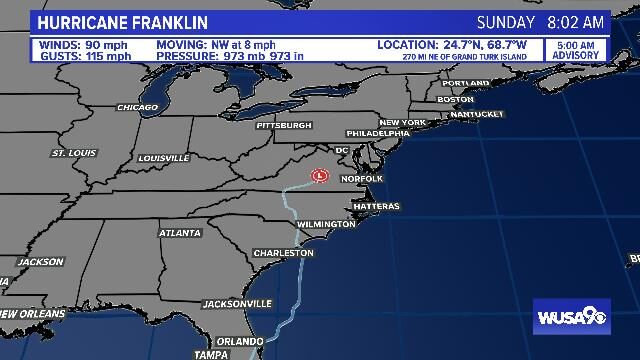 RELATED: How to prepare for a hurricane before it arrives

The Atlantic Hurricane Season is Picking Up
In addition to tracking Dorian, we now are tracking Gabrielle way out in the Atlantic. There is also another tropical wave in the eastern Atlantic with a 50% chance of development in the next 5 days.

Climatologically, the bulk of tropical storms and hurricanes develop after Aug. 20. That's because we have the warmest waters of the year at this time which serve as fuel for intensifying tropical systems and hurricanes. September is the busiest month of the Atlantic hurricane season, when atmospheric and environmental conditions are typically the most favorable.

The season lasts until Nov. 30. Through September fourth Aug. 28. We've have had seven named storms, including two hurricanes.

The next name on the list of Atlantic hurricane names is Gabrielle. The World Meteorological Organization maintains the list of names. There are six lists that are reused every sixth year. However, the WMO retires names of tropical storms and hurricanes that have been especially damaging or deadly. For example, there will never been another Katrina, Andrew or Michael.

There are also different lists for different parts of the world using names in the languages that are indigenous in that region.