Weather Knowledge: What are POPs?

Everyone always asks what the term 'rain chances' really means. Rain chances are called POPs. A POP is the probability of precipitation.

When we show the rain chances -- a probability of precipitation or "POPs" -- on our 7-day forecast, it shows a number that often is misunderstood.

What it represents is the chance that you will see rain on that day. It does not tell you how long the rain will last, or how much rain you will see.

Think of it as the percentage of the area that will see rain on a given day. For example, let’s say we knew for sure that thunderstorms would form on Thursday across parts of Hampton Roads, but we weren't sure from where they'd come exactly.

I would try to do is determine what percentage of the area I thought would see rain. Once I come up with that number, I put it on the 7-day as the “POP” for the day. But even that's tricky to predict.

Let me give you two examples.

In this first example, we have a 200-mile long line of rain that is very narrow and is oriented from north to south in Central Virginia. It is moving from west to east. In that scenario, the entire area would see rain at some point during the day but it would be very short-lived. 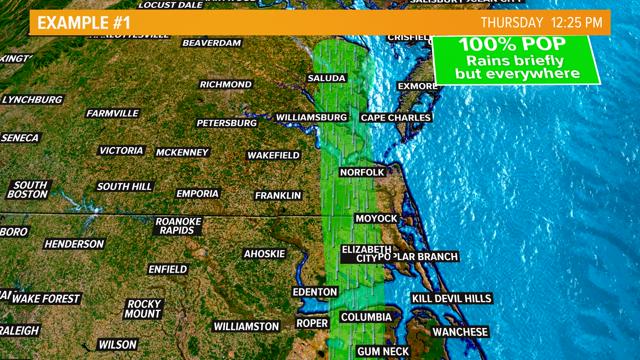 The opposite of that scenario would be the exact same line 200 miles long that is still aligned from north to south but is moving from the south to the north. In that case, most of the area would be rain-free throughout the day but the narrow band of communities underneath the rain would keep seeing rain all day as the storms moved over the same area hour after hour.

By the way, this is what we call “training” because it is like many train cars moving along the same track. 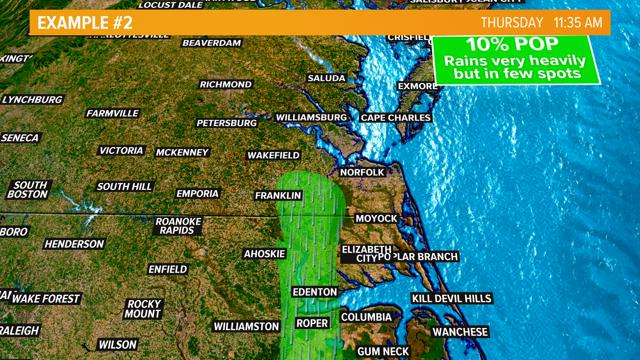 In the first example, if we were to look at a map the next day of where it rained we would see everyone getting precipitation, even though it would not have lasted very long. In hindsight, 100% chance was perfect, even though it might only have rained for 10 minutes and not rained very much.

In the second scenario, it might only have rained over 10% of the area but it rained all day and was very heavy (probably flooding). In hindsight, that day should have had a 10% POP on the forecast.

In both cases, just the raw rain chance doesn’t convey the full extent of the forecast which is why it needs to be used in conjunction with the other wording in the forecast.

Here's a third example showing another day with a 100% chance of rain like example number 1, but this is a very different scenario. In both of them, it rains everywhere but in this new case, it rains most of the day. 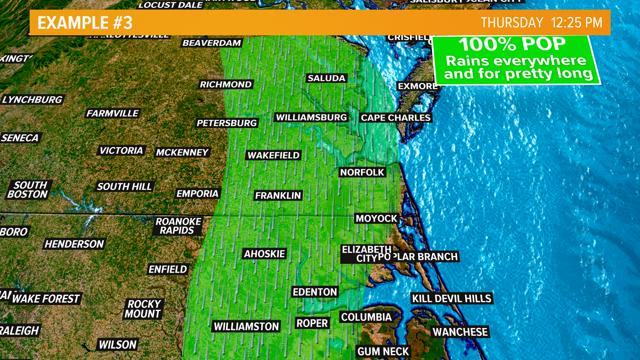 An example of how this plays out in real life is when we put 30% in a forecast because we are very sure that only one or two stray thunderstorms will form.

The following day, two storms will form and they won’t move much, which means only 30% of the area gets rain.

This is pretty typical feedback we get on those days:

POPs are often how we quantify things in the summer when thunderstorms are in the forecast and we know (or are pretty certain) that they will form, just not where.

The more literal way of looking at POPs is to give a chance that you will see rain the next day based not on what percentage of the area will see rain, but based on what the chances are for rain everywhere.

Think of this type of POP as the chance that something will or will not happen.

So the bottom line is that relying on just the POPs will not give you a complete forecast, and those numbers need to be combined with the worded part of the forecast to give you a better understanding of the actual forecast.

That brings us to another point about POPs and what numbers get shown on your weather app, but that is a discussion for another segment. Until then, thanks for reading (and watching)!