A Code Orange Air Quality Alert is in effect for NC Thursday: Here's what that means

Smoke can be seen as a 'haze' here in the Carolinas and will cause air quality problems for some areas. 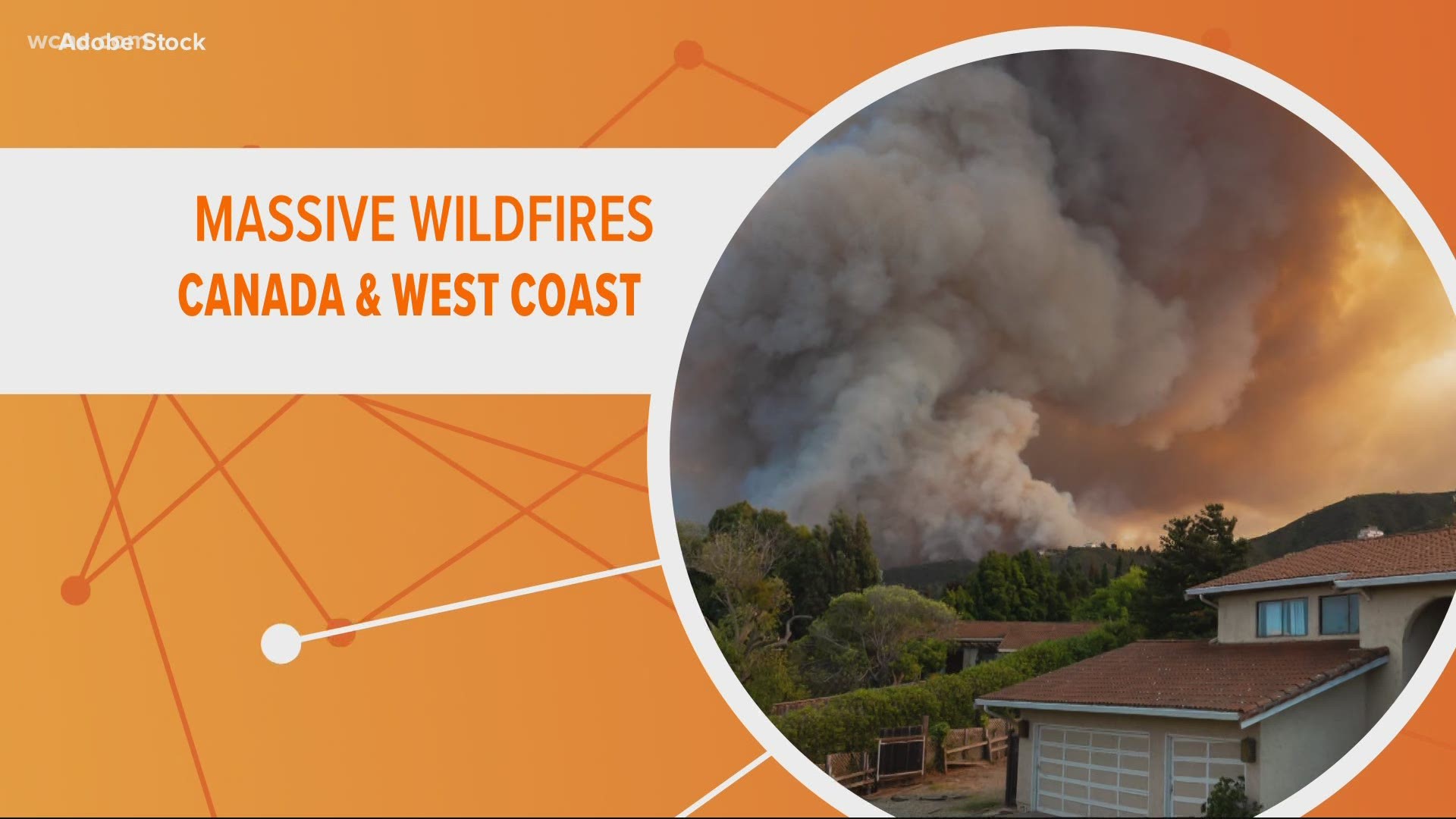 CHARLOTTE, N.C. — A Code Orange Air Quality Alert is in effect for most of North Carolina Thursday due to smoke and haze in the atmosphere from wildfires that are burning in Canada and the western United States.

The effects from those wildfires are being seen as far east as the Carolinas, where 100 North Carolina counties are under an Air Quality Alert Thursday. First Warn forecaster Larry Sprinkle said the smoke and haze will be hanging around at least another day or two.

"If you have any respiratory problem, limit your time outside, especially in the afternoon," Sprinkle said.

How the haze got to the Carolinas

Wildfires in Canada and in the Western United States, have put enough smoke into the atmosphere that the effects are being seen as far east as the Carolinas. From extended drought and record-breaking heat, fires like the ones in the headlines here in mid-July 2021, are becoming a repetitive story with little relief in sight.

The reason why smoke can travel thousands of miles, creating a haze and lowering air quality on the east coast, is because of the jet stream. The jet stream is dipping from the northwest allowing for elevated smoke to filter into the Mid-Atlantic.

This smoke will make it look hazy and visibilities will be lower than usual when looking at the horizon (especially from the High Country).

What Does This Mean for the Carolinas?

Wildfires put a tremendous amount of smoke into the atmosphere and can sometimes burn so hot that they even create their own weather. In the Carolinas, you can expect the sunrises and sunsets to have a fiery look to them with lower visibilities across the horizon. Eric Fisher from the Carolina Weather Group showcases what the Mountains view looks like now compared to a day in March.

How are wildfires in the Western US and Canada affecting us here in NC? Smoke is filtering into the region, causing significant decreases in air quality. These photos, taken at the same location, show how prolific the issue really is (left Mar 2021, right yesterday) #NCwx pic.twitter.com/CU2LTTpmFK

Look at the difference and the color of the sky. This is will be the norm for a few days as more smoke will filter in.

RELATED: Firefighters make progress against big fires in US West

With elevated smoke in the atmosphere, like many other states in the continental United States, the Carolinas will be dealing with elevated levels of particulates. Levels will not reach a dangerous level but will become unhealthy for sensitive groups.

NOTE: According to the EPA, Unhealthy for Sensitive Groups is triggered when "air quality is in this range, people who are in sensitive groups, whether the increased risk is due to medical conditions, exposure conditions, or innate susceptibility, may experience health effects when engaged in outdoor activities."

Due to wildfire smoke, the air quality has deteriorated rapidly today & now a Code Orange for Air Quality & an Air Quality Alert is in effect. This means it can be unhealthy for sensitive groups outside, those with respiratory issues & the very young & old. #cltwx #ncwx #scwx pic.twitter.com/PyvpxbBxiB

The highest levels will peak on Friday (July 23, 2021). Then they will fall to a moderate level by the weekend. So some may want to still wear their masks if they do not want to be affected. Also, the typical hot weather we see this time of year will raise the levels of ground ozone as well.

RELATED: What is ground-level ozone?