Sika Henry noticed that no African American woman had become a pro triathlete. So she made that goal her mission. Even after a serious accident, she never gave up. 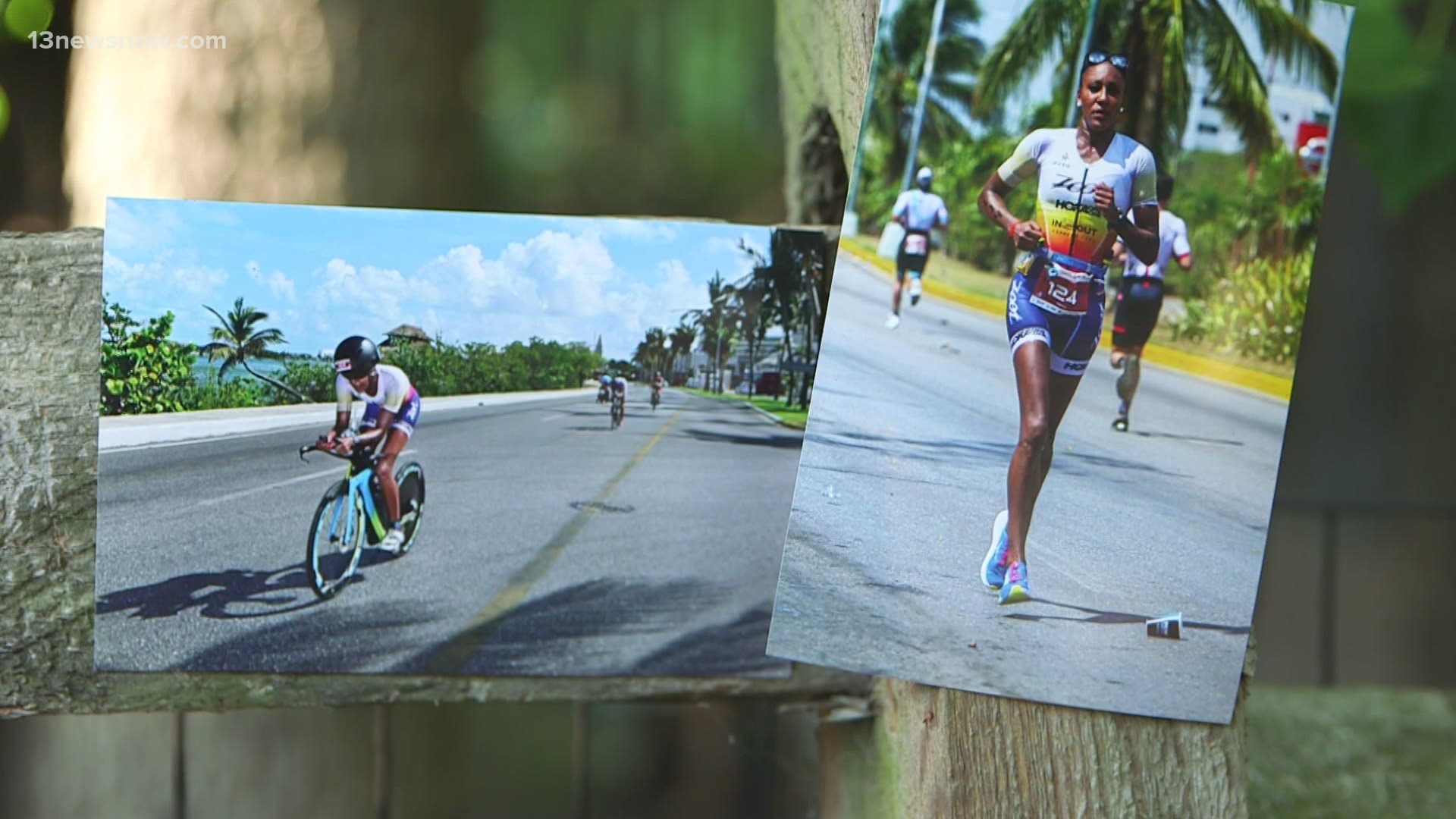 NEWPORT NEWS, Va. — It all started while watching the 1996 Olympics.

Gymnast Dominque Dawes becomes the first African American woman of any nationality to win a gold medal in gymnastics, and watching at home is a young Sika Henry.

“Growing up I was active, my parents had me in every sport imaginable," Henry said.

Not knowing that years later, it would be her to break another kind of barrier she never imagined.

From college athletics to triathlons

Henry's 5'10" frame makes her an ideal swimmer, which is exactly how she spent a lot of her spare time in high school.

“I didn’t really like running long distance, not even a mile to warm up.”

After college as a finance major, Henry took a job working in Midtown, Manhattan at J.P. Morgan in New York City, but found that her professional life had taken a toll on her fitness and activity level.

But going to college in Boston means she circled a date on every student's calendar across the city: Marathon Monday. It's what originally put completing a marathon on Henry's radar, on top of watching the New York City Marathon every year growing up outside the City.

The first marathon she completed was in 2008 in Atlantic City, New Jersey, and Henry admits it wasn't in the most stylish of fashions.

“I was puking, and walking everywhere. I wanted to quit. Wanted my friend to drive me home but I couldn’t find her, so I ended up finishing somewhere under the four-hour mark."

But it would be the first accomplishment, of many to come.

Henry would eventually move to the Hampton Roads region after taking a new job but fell into a period of isolation and depression. Seeking a way to distract herself and try something she had never done before in her life, it eventually manifested itself into a new path.

"I added triathlon to my bucket list. Just so happened there would be a sprint triathlon at Buckroe Beach in two weeks. Since I only had two weeks, I bought a mountain bike from Dick's Sporting Goods, bought a bathing suit, some goggles," Henry explained.

While some accomplishments are more about the journey than the destination, Henry also says her first triathlon was nothing to write home about.

"Probably came in close to last place," Henry laughed in an interview with 13News Now. "People were flying by me on the bike, I even didn’t know triathlon bikes existed!"

It was more fun than anything, Henry said. But at the starting line, Henry noticed a glaring similarity among the other athletes there.

“The other thing I noticed at the time was I was the only African American person there, one of the few people of color at the race," Henry said. "So I saw a lack of diversity. Saw that only one African American male had ever qualified for a pro card and no females. Then I thought that would be a really cool goal.”

The carrot, and the accident

Henry knew her goal of being the first African American female pro triathlete would put her in unchartered territory.

"For me, it was trying to reach the pro level, and a carrot dangling in front of me when I found out there’d never been an African American woman who qualified for a pro card."

After her first sprint triathlon in 2013, Henry hired a coach and worked non-stop to achieve that goal of becoming a pro triathlete. What that would entail would mean placing in the top 3 of triathlon races among the amateur pool.

“That’s the beauty in endurance sports, it’s not about talent. Who has the guts to just stick it out.”

In April 2019, Henry flew to Texas to compete in Ironman 70.3 Texas, another round of triathlon competition where the top three amateurs could qualify for their pro card. Henry's life changed during the cycling portion of the race.

“I remember going about 25 miles an hour," Henry said. "One of the competitors in front of me didn’t look back, cut in my line. To not hit her I swerved and hit a median in the road. Flew face forward into the pavement, don’t remember anything, and woke up hours later in the emergency room. When I woke up I had no idea what happened. The first thought is, 'Am I paralyzed?'"

Henry's head and face suffered major injuries as a result of the crash, damaging her skin and teeth to the point where she couldn't eat solid foods for a period of time, either.

Credit: Sika Henry
On the mend following her accident

“Sucked the life out of me, it was hard to accept, it wasn’t just the injury, all this hard work and dreams, but it didn’t feel like it was supposed to be over just yet.”

Henry healed by 2020, but life would throw her another obstacle unbeknownst to the rest of the world.

Henry would finally get her chance at the Challenge Cancun event in May 2021, where the script is the same as it has been for years: finishing top three among amateurs to qualify for a pro card.

Four hours and 59 minutes later, Henry crossed the finish line, where she would later learn she not only finished top three among amateur racers but also top of her age group. With it, she became the first African American female to qualify for her pro card in the sport of Triathlon.

"It’s so cool to say, that I'm the first," Henry said. “Surreal. I’m still on cloud 9, the race was two weeks ago. You’re chasing something for so long and it happens, you’re like, 'Did that happen?’"

She says her story is one of never giving up, no matter the obstacles in front of you. Had she decided to give up after any of the hardships she faced, she wouldn't have been able to make the history that she did.

“Anything is possible, I didn’t envision any of this," Henry said. "I feel like if I quit what kind of example does that give?”