The makers call the Corindus CorPath GRX System a less-invasive and more precise way to do the surgery while keeping doctors away from radiation. 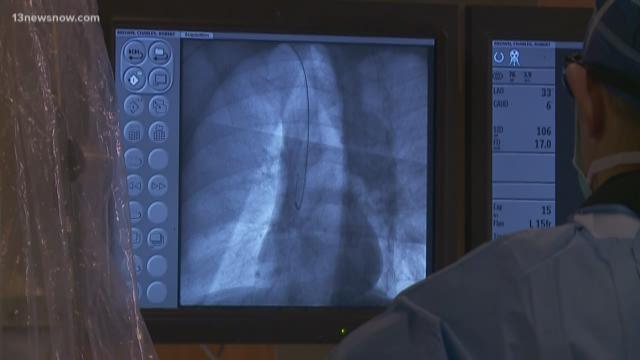 CHESAPEAKE, Va. — According to the American Heart Association, one in every three Americans dies from cardiovascular disease.

So for the first time in Hampton Roads, doctors inside the Chesapeake Regional Medical Center are using a new device to restore blood flow in your heart.

Doctor Ron McKechnie is the medical director for the Cardiac Cath Lab and he’s the first doctor to operate on a patient with the "Corindus CorPath GRX System."

The system uses a catheter inserted through the patient’s wrist and connects it to a robotic arm. Then, the doctor can use a control panel to insert the stent -- from a safe distance -- without having to wear a lead vest.

Not only does the device protect surgeons from radiation, but the manufacturers said it provides more control and accuracy during the operation by using a robot.

Doctor McKechnie said it benefits both the doctor and patient. "It’s not often you have a device that does both,” he said. "While I'm going to benefit from it, it's for the patients in the community.”

His patient on Monday came in with a heart attack, but he needed another stent in his heart after he recovered.

Research form the Corindus Vascular Robotics shows the machine helps reduce the likelihood for additional stents by 8.3 percent because of the precision.

"You can actually deploy devices to the sub-millimeter. So, it's more precise with our robot,” said Regional Manager Zach Gentry.

He said the FDA-approved robot is less invasive than by hand, but it's still intuitive.

"So, the way some of the head physicians in the world move balloons and stents. We're using those algorithms to move it robotically as well."

Even though it's new, it's already helping one patient with a successful surgery.