It's potentially a quick way to make money. But according to law enforcement agencies across Hampton Roads, it's a scam and it's illegal. 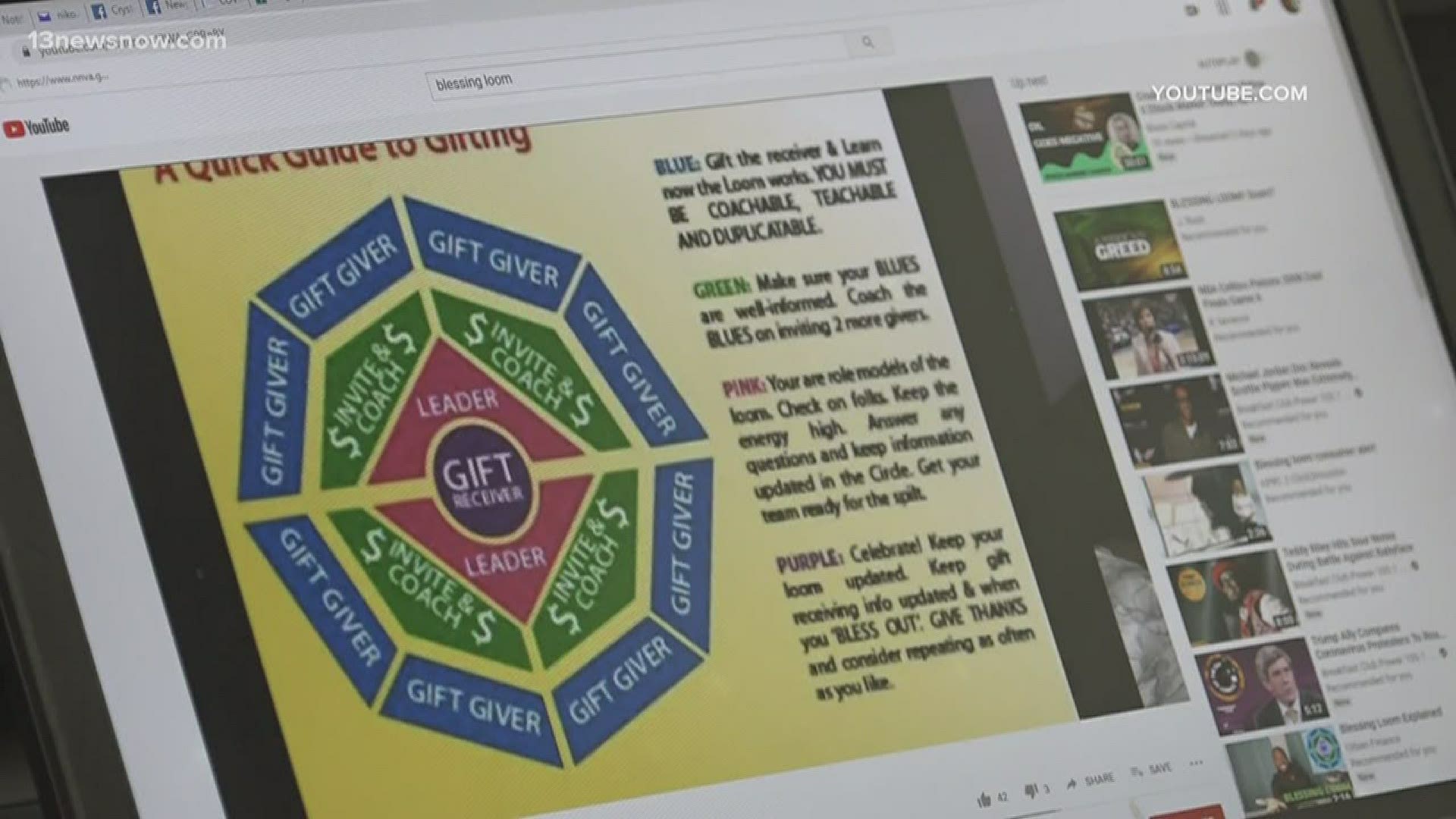 HAMPTON, Va. — More people are looking for a little extra money during the COVID-19 pandemic. But sadly, more scams are popping up, too.

Maybe you've seen the “Blessing Loom” posts pop up in your feeds, asking you for money, and promising much more in return. But police say it's illegal if you participate.

Several of the scams popped up on social media over the weekend.

This is how a Blessing Loom works: You pay money to join the loom, using something like Cash App. But the goal is to get other people to pay and join too. Once they do, the person in the center cashes out and walks away with a couple hundred dollars. To get paid, it requires you recruit others to join.

The Hampton Police Division said it's illegal. Sgt. Reginald Williams said under Virginia law, this is classified as a pyramid scheme.

“As always, if it seems too good to be true it probably is,” Williams said. “It involves the exchange of primarily for enrolling other people into this scheme without any other product or service being offered or delivered.”

According to Sgt. Hartian of Newport News Police Department Economic Crimes, this does appear to be a pyramid scheme and they do investigate them but have not received any reports regarding this one.

Haritan said pyramid schemes are designed to look like a multi-level marketing company that use independent representatives to sell products or provide services to family, friends, acquaintances, and so on. A representative earns commissions from retail sales he or she makes, and also sales made by other people they recruit. The best example of a multi-level marketing company I can think of is Mary Kay Cosmetics.

Pyramid schemes are illegal because they claim to be in the similar business of selling products or providing services to consumers in order to look like a multi-level marketing company. It is classified as a scheme because little or no effort is actually made to market the product or service they are alleging to provide. Instead, money is made in a pyramid fashion from recruiting other people to join “the program.” Because pyramid schemes rely on new members to bring in money, the scheme often collapses when the pool of new recruits dries up. When the scheme finally does collapse, the majority of the people, with the exception of the few at or near the top, lose their money.

A pyramid scheme is psychological; playing on people’s greed and fear of missing good deals. Avoid programs that focus more on recruitment than the sale of a product or service to an end consumer. If the opportunity of income is primarily derived by recruiting participants or sales persons rather than selling the product, it is likely illegal. Be skeptical of programs or claims you will make money through continued growth of commissions on sales from new recruits. Don’t fall victim to high-pressure sales tactics. If you believe you are not being given enough time to research or review the details, don’t sign or pay anything – go elsewhere. Talk about the alleged opportunity with a spouse, friend, accountant, or an attorney. Do not sign a contract or pay money to participate in a business opportunity without taking your time and reading all of the provided paperwork.

Williams said anyone who participates could be guilty of a Class 1 misdemeanor.

“We encourage people when you see things like this [to] slow down, do your research and talk with someone you trust,” Williams said. “Although we haven't had any direct reports of this exact scam, and no reports of victims, it is similar to other scams we have seen.”

RELATED: BBB warns about posting graduation photos for the Class of 2020 challenge