Relatives of Cathy Thomas are among those confident that current testing could lead to a break in the Colonial Parkway Murders. 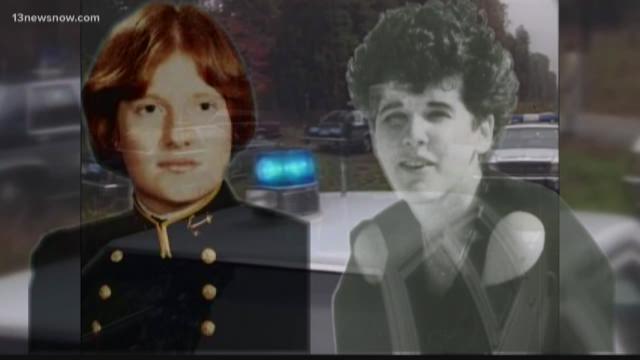 NORFOLK, Va. (WVEC) -- Family members of the victims of the Colonial Parkway Murders believe new DNA testing could identify the person or people who killed their loved ones in the late 1980s.

Relatives of the eight people who died said that after more than a year of pleading for new tests, all they've seen are delays.

For law enforcement today, DNA testing is standard and often helps to put killers and rapists in prison. In 1986, however, that forensic technology virtually was unknown.

It was that year, more than three decades ago, that park rangers in Colonial National Historic Park found Cathy Thomas and Rebecca Ann Dowski murdered inside Thomas' car on Colonial Parkway.

It's a day Thomas' brother, Bill, never will forget.

“We didn't know very much at the beginning,” he said.

In terms of finding the killer(s), Thomas' family initially was confident because the murders took place on federal property.

“We thought that was a good sign from the very beginning that the Federal Bureau of Investigation would handle the case from there on out,” recalled Bill Thomas.

In the next three years after Thomas' and Dowski's murders, the families of six other people came to know the grief the Thomases felt.

For Bill Thomas, time changed not only circumstances but perspective.

“Dealing with the FBI has been incredibly frustrating,” he told 13News Now.

The frustration came to a head about a year-and-a-half ago. Bill wrote a letter to the FBI formally requesting new testing on hairs found in his sister's hand during her autopsy. The hope is that using current science and technology to examine those hairs and other samples collected in Thomas' car could find a match/matches to a killer/killers.

“The state-of-the-art was significantly different back then,” Bill said.

The Thomas Family offered to raise money for testing at a private lab, such as Bode in Northern Virginia, if the lab at Quantico was too busy with other priorities.

We asked Bill if, in the year-and-a-half since he made the request, he knows of any testing the FBI has done on the hairs.

“Disappointingly, no,” he responded. “We are constantly reminded that we are the lowest possible priority.”

13News Now pushed the FBI for answers. We asked very specific questions, including if any of the forensic samples have been tested with newer technology and why the bureau wouldn't allow an outside lab to perform the tests. We received a statement, in which a spokeswoman called the case an active investigation. The statement didn't acknowledge specific testing, but said "a number of items are currently being reviewed" at the lab in Quantico.

"Maintaining the integrity of evidence and the chain of custody is a very high priority for the FBI and is integral to all investigations," spokeswoman Tina Pullen wrote.

We followed up with the FBI because we wanted to know if there is a difference between items being "reviewed" versus "tested" and, again, if an outside lab is being considered. Pullen responded she only can speak generally because the case is active and ongoing, but she wanted to reassure the community and families the FBI is engaging resources and actively investigating.

For now, the families of the murder victims are left at a crossroads.

“We're not saying that our 28-to-31-year-old case is more important than something terrible that would happen tomorrow,” he said. “What is very frustrating is we feel we are constantly being told 'get back in line, get back in line' and no one's been standing in this line longer than my family has.”