As if the pain from her accident wasn't bad enough, a Newport News woman said she burst into tears upon seeing a bill for $31,000 from a helicopter company. 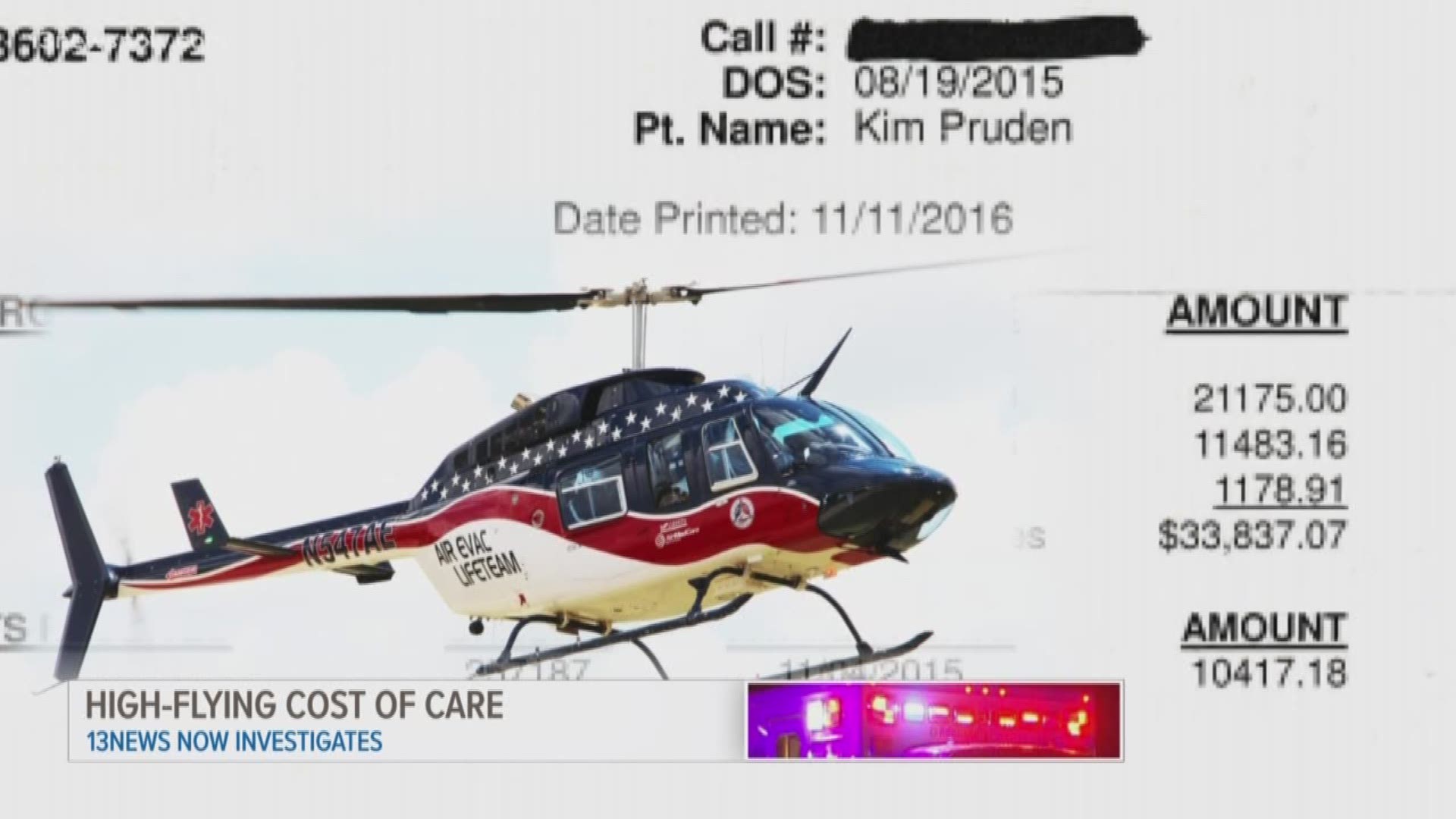 NEWPORT NEWS, Va. — Most people will never need one, but they're there for you in the worst moment of your life. Air ambulances -- typically helicopters -- save people every day.

For more than half of those patients, though, there's another big blow that comes after the accident: a huge bill that isn't covered by insurance.

Sometimes, patients are getting these bills before they even leave the hospital. In other cases, it's just days after they get home.

Take Kim Pruden, a Newport News mother who went on a getaway trip to West Virginia with her daughter before sending her back to school at Virginia Tech. It was August 2015.

The two went for a guided ATV expedition in the mountains. Pruden said she couldn't keep up with the guide when she hit a rut and toppled her ATV.

"It flipped and it rolled on top of me," she recalled.

The trip went from enjoyable to frightening in seconds.

"I was dazed and in shock and then all of a sudden it felt like someone had poured gasoline on my back and set it on fire," Pruden said. "It was that significant."

She fractured vertebrae, cracked two ribs and created a leak in her lungs.

Still, she was conscious and alert at the scene. She said she could feel her toes and fingers, so she knew she wasn't paralyzed. An EMT came to the scene via ATV and announced he would be calling in a medical helicopter.

Pruden said at that point, it was out of her hands. She was loaded into a helicopter and said she received little medical attention during the 31-mile trip to the children's hospital in Charleston, West Virginia.

She had to be taken to the children's hospital because the elevators at the local trauma center weren't working. So she took two rides that day; the second in an ambulance.

The EMT made the decision to fly Pruden that day, but she's the one who paid the price.

"I was home about a week, to a week and a half [later], and the piece of mail I received was from Air Evac Lifeteam from West Virginia for roughly, about $31,000," she said. "I burst into tears."

Her private, out-of-network insurance only covered $10,000.

Then came the weekly to bi-weekly phone calls from the helicopter company.

"'How are you? How are you feeling?"' she mimicked, "Like, 'We're really concerned for your health.' Well no, that's garbage, they're not concerned. They're wanting to know, where's their money?"

She said she held them at bay for about 10 months as she attempted to sue the ATV company and the guide for negligence. She said he sped ahead, leaving the women behind and unaware of the proper trail causing Pruden's crash.

But the waiver for outdoor activities in West Virginia was ironclad, according to her lawyer. He suggested Pruden simply negotiate the remaining $21,000 directly with the helicopter company.

Like a strange car buying experience, they eventually agreed on a lump sum payment of $12,000. She said she had to play "tough guy" and gave them the choice of 12 grand or $50 monthly payments for three decades.

"We actually tapped into a retirement fund," Pruden said. The Prudens paid the penalty to Uncle Sam.

Scenarios like this are playing out all over the U.S. It's called balance billing. Insurance pays for some of the cost, then the consumer is left to handle the rest. The "rest" may mean tens of thousands of dollars.

According to the Government Accountability Office, the median cost of a medical helicopter ride was $36,400 in 2017. That's the most recent data available.

The data collected by GAO shows about 70 percent of patients flown in a helicopter were out-of-network, like Pruden.

"There needs to be some sort of regulation with these," Pruden said.

Congress is considering an overarching surprise medical billing act that covers air ambulances, but it hasn't moved since last summer.

Meanwhile, the Secretary of Transportation has formed an Air Ambulance and Patient Billing Advisory Committee. It met for the first time on Jan. 15 and 16 in Washington, D.C.

The committee is tasked with coming up with steps states can take to protect consumers, among other issues, according to the Government Accountability Office.

Consumers like Kim Pruden. She tells her story to anyone who will listen, hoping it will make a difference for even one person.

"It's not that this is a bad service. It has saved many lives, I'm sure. But after it saved your life you're getting a $30,000+ bill?" she said shaking her head.

Some states have already adopted measures to combat balance billing. In Virginia, a law went into effect last year that allows patients in non-emergency situations to opt-out of air ambulance transport. If they opt-in and are out-of-network, they must sign a form acknowledging the possibility of balance billing.