Injecting Trust: the efforts to vaccinate Black people amid history of medical mistrust

As more COVID-19 vaccine doses are administered, there's a fight against distrust and misinformation, especially among the Black community. 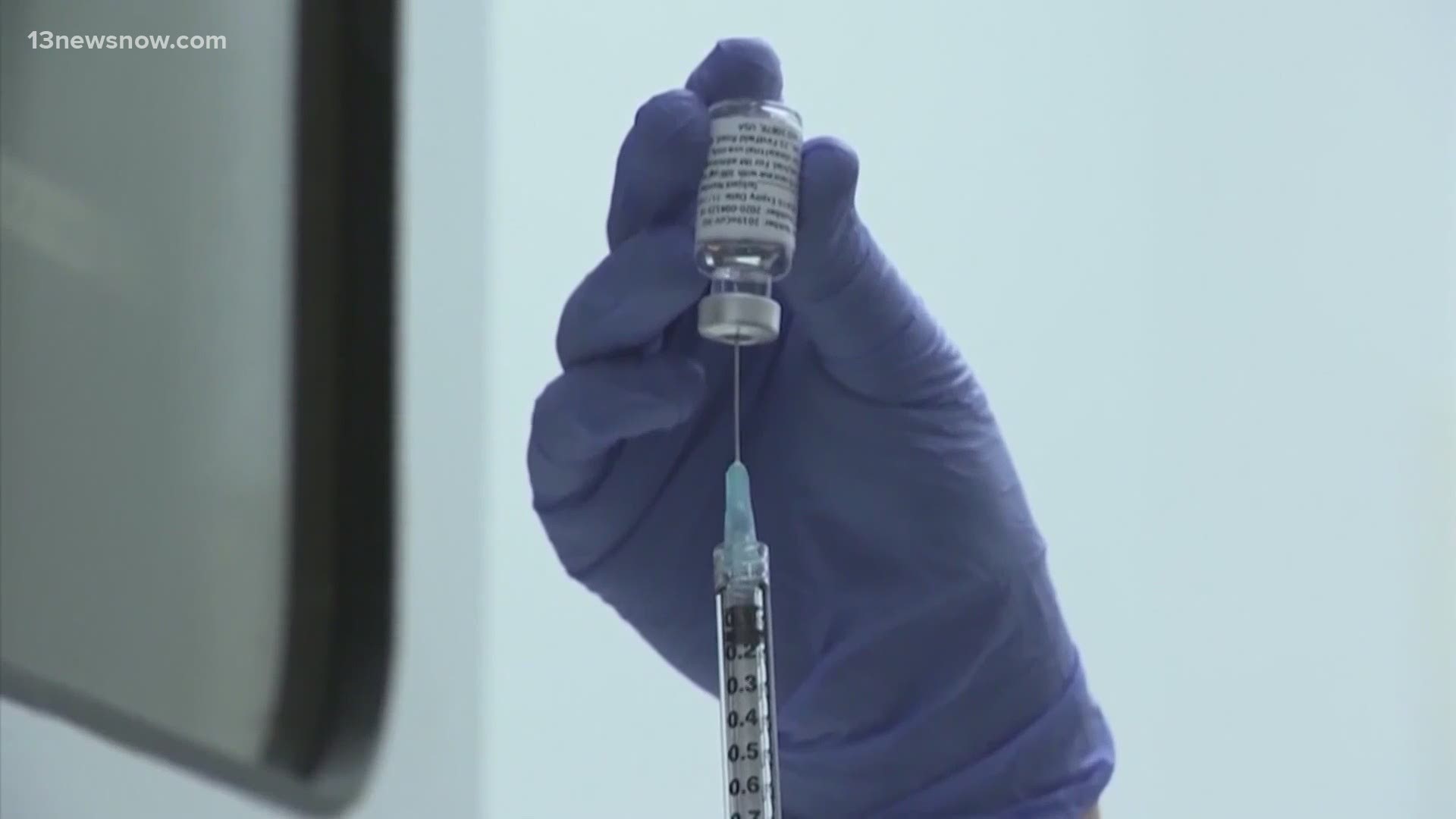 NORFOLK, Va. — Inside Chosen Styles and Cuts Salon in Norfolk, the COVID-19 vaccine has been the subject of conversation a lot lately.

For barbers Scott Moyler and Vance Moore, getting vaccinated isn’t so cut and dry.

“There’s nothing anyone could say to convince me to take that,” said Moore.

Moore claims to have not taken any vaccinations in more than a decade and prefers more holistic approaches to healthcare.

Now that vaccinations are underway, many view every injection as a sign of hope. However, there are people, like Moyler and Moore, who are having a hard time trusting the science.

So far in Virginia, the number of vaccinated Black and Latino Americans is significantly lower than White residents. As of February 18, nearly 680,000 White Virginians have received shots compared to 113,676 Black people and 53,375 Latino people, according to the VDH COVID-19 dashboard. It should be noted the race and ethnicity of over 520,000 vaccinated Virginians remain unknown.

Nationally, research reveals Black Americans have received COVID-19 vaccinations at a much lower rate than White Americans in the early stages of the rollout, according to Kaiser Health Network.

Advocates say there are two commonly discussed concerns: lack of trust and access to the vaccine.

Dr. Cassandra Newby-Alexander, dean of the College of Liberal Arts at Norfolk State University, says distrust among Black Americans stems from a history of being denied access to medical care or experiencing mistreatment in care dating back to slavery.

In November, a study by the NAACP and COVID Collaborative found only 14% of Black Americans and 34% of Latino Americans trust a vaccine will be safe. Eighteen percent and 40%, respectively, trust the vaccine will be effective, according to the survey.

In another recent survey, when asked if they would get vaccinated if it was free and determined safe by scientists -- only 17 percent of Black adults said, yes -- which is 20% lower than both White and Hispanic adults.

Newby-Alexander links suspicions to a history of mistreatment, including the well-documented Tuskegee syphilis experiments of the 1930s. The Public Health Service and the Tuskegee Institute conducted studies on the nature of syphilis on 600 Black men. However, researchers were not truthful about the study and did not receive the patients’ informed consent.

The men did not receive proper treatment needed to cure their illness. The study lasted for 40 years, according to the CDC, and resulted in a financial settlement and public apology by President Bill Clinton in 1997.

“But we’ve had many other examples of that,” Dr. Newby-Alexander said. “It’s just that was the most obvious, known documented example.”

Even now, Black mothers face higher mortality rates when giving birth, according to the CDC. Black women are two to three times more likely to die from pregnancy-related causes than White women and more likely to receive C-sections.

And 2016 research out of the University of Virginia found Black patients are systemically undertreated for pain compared to White patients. The study revealed medical students held false beliefs like Black people have thicker skin and feel less pain.

Scientists, physicians, and slave owners once pushed these beliefs to justify slavery and the treatment of Black people in medical research, said the document.

“Taken together, this work provides evidence that false beliefs about biological differences between Blacks and Whites continue to shape the way we perceive and treat Black people; they are associated with racial disparities in pain assessment and treatment recommendations,” the study reads.

There is also the well-known story of Virginia native Henrietta Lacks. The young mother’s cancer cells, known as "HeLa," became one of the most studied and important findings in medical history.

However, the cells were taken and studied without her or her family’s knowledge in 1951. To this day, the Henrietta Lacks Foundation, launched by her family, seeks to help people and their families impacted by the research and in part, seeks to promote discourse related to consent.

Building trust in the COVID-19 vaccine

A more recent poll by Pew Research in December showed Black Americans' confidence in COVID-19 vaccines rising. Still, only 42 percent of Black participants said they would get vaccinated, and that is significantly less than both White (61%) and Hispanic (63%) participants.

“Really, I think it’s going to take people on the ground level like me and other practices out here because patients are going to look to us,” said Dr. Newby, who is the brother of Dr. Newby-Alexander.

Dr. Newby is fully vaccinated with the Pfizer vaccine and recently began offering vaccinations in his Norfolk clinic. Meanwhile, he shares his vaccination experience, step-by-step, on his Facebook page. He hopes to lead by example and show others that the COVID-19 vaccines are safe.

“This is about how do we all live,” he said. “And the best way to deal with it is to prevent it.”

Dr. Newby-Alexander said many African-American patients seek African-American physicians for trust reasons. Over the years, she said trust in the Black community grew as Black doctors pulled resources together to build hospitals and medical clinics.

“To me, the answer is simple: make sure all the Black doctors in every single community are the ones helping to distribute the vaccine,” said Dr. Newby-Alexander.

“This is a new thing and for a lot of people change is a problem,” said Dr. Keith Newby. “That's why I went out and did it, because who’s going to listen to me if I did not?”

Gabrielle Whiten, 24, of Chesapeake, is a full-time Ph.D. student at New York University School of Medicine and is using her popular Instagram page to build awareness about the vaccine to her peers.

She is a member of NYU’s molecular pharmacology program and iron metabolism and neurodegenerative disease and has not only been studying the development of vaccines but interacts with patients in the medical center’s COVID-19 wing.

“I really do trust this vaccine because I know the work, the experiments, and the thorough investigation of these vaccines,” she said. “My platform was the perfect opportunity for people to bounce off these concerns.”

Whiten took the Pfizer COVID-19 vaccine in mid-January. The medical center offered all employees, including Whiten, the opportunity to be vaccinated. She described the experience as “easy.”  Whiten, who also writes a blog with a popular following, hosts Q & A sessions on her Instagram account.

“A lot of the questions I got when I posted the vaccine... people more or less do not trust vaccines in general,” said Whiten. “'It’s not been tested' and 'Do we really know it’s safe?' kind of situation. And the original clinical trials were with 30,000 people. That’s a stadium of people. So really, you aren’t the first person.”

The Virginia Department of Health has formed advisory councils for the vaccination rollout, including a communications and messages subgroup. The team of people from across the state, including Hampton Roads, identifies key audiences and advises the best way to relay information about the vaccine.

But the attention has seemingly turned to access. The committee is finding more and more people want to take the vaccine, but there needs to be a way to get doses into their communities.

A January report by the Kaiser Health Network found Black Americans received COVID-19 vaccinations at a “dramatically” lower rate in the early stages of the rollout.

“It’s getting people to trust the science and be open to receiving the vaccine,” said Rev. Dr. Dwight Riddick, senior pastor of Gethsemane Baptist Church in Newport News.

Black churches and pastors like, Dr. Riddick, are aiding in that charge. Dr. Riddick said pastors on the peninsula are starting to work together to dispel myths and ensure equal access to the vaccine.

He is one of several Black pastors in Hampton Roads encouraging people to get vaccinated for COVID-19.

Recently, 2,000 people in Phase 1b received vaccinations at Bethany Baptist Church in Chesapeake. The two-day event was a partnership among 20 African-American pastors, EVMS, and Chesapeake Regional Healthcare.

On February 19, Dr. Danny Avula, Virginia’s vaccination coordinator, said in a teleconference the state is mulling a weighted distribution model that would provide more equitable access for people most vulnerable to COVID-19, including Black and Latino people.

“It likely will be a weighted model that prioritizes 65 and up, specifically Black and Latino residents who are 65 and up,” said Dr. Avula. “And what we call 'COVID impact,' like the rates of hospitalizations and deaths. So, when you have higher rates of hospitalizations and death in the Black and Latino community that will weight the allocation to that particular locality.”