North Carolina's coronavirus metrics have fallen from their peak in January to pre-holiday November levels. 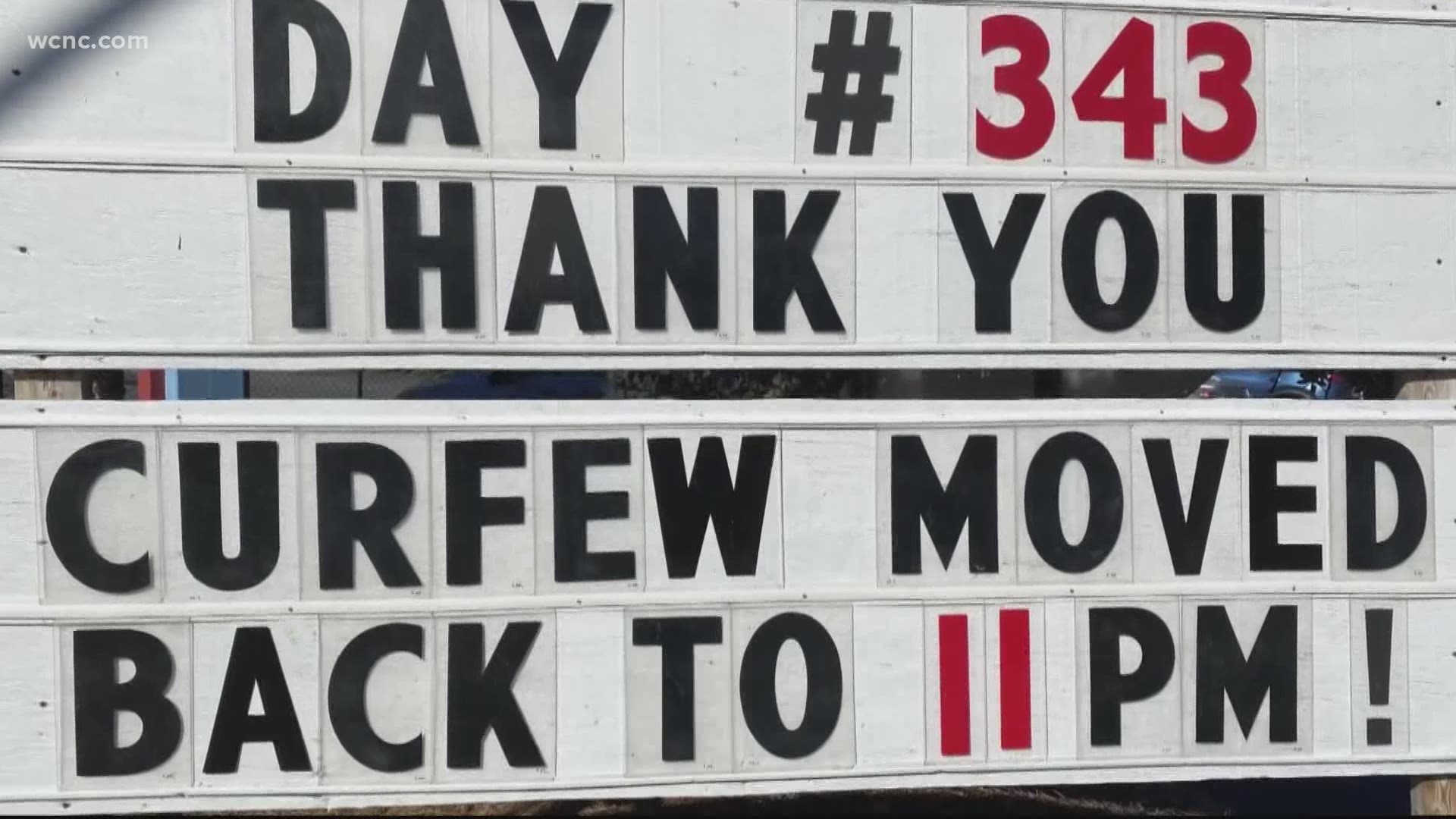 "Today's action is a show of confidence and trust, but we must remain cautious," Cooper said during the afternoon briefing in Raleigh.

The nightly 10 p.m. curfew will be lifted Friday when the governor's modified stay-at-home order expires. This nightly curfew is the only restriction being completely eliminated.

Also happening Friday, capacity changes will allow businesses to host more customers simultaneously. Effective at 5 p.m. Friday, many businesses can expand to 50% capacity so long as social distancing, mask mandate, and other safety precautions are still imposed. These businesses include:

Some exceptions apply to allow more or less attendance at particular businesses.

Outdoor venues, including most sporting events, outdoor bars, outdoor amusement parks, can only operate at 30% occupancy but will no longer be maxed at a cap of 100 people. Previously, those events and businesses could not operate at the given capacity if the total number of people exceeded the numeric cap.

Charlotte-Mecklenburg Schools has confirmed this week's events will still have a max of 100 fans in attendance and will loosen restrictions next week.

Jennifer Mowrey, whose son Jack Mowrey plays lacrosse and football for Ardrey Kell High School, said the 100-person limit was going to make it tough on parents and families to attend games.

“I want to be there and support him," Mowrey said. "He loves to play. He loves the excitement of the game and having fans there.”

For Meagen O'Connell, the coming changes are a huge success. She's the Weddington High mom who was first behind a petition calling for increases to the capacity cap on high school sports attendance. Her petition gathered more than 45,000 signatures.

"I look at today as a huge step forward in the right direction and I'm looking forward to even more positive things down the road," OConnell said.

She said she's especially thrilled for the kids, saying it's a win after all the important events they've seen canceled over the last year.

Large indoor sporting venues, such as those used by college and professional athletics, can operate at 15% capacity with no cap otherwise so long as their stadium or arena typically seats more than 5,000 attendees.

The Charlotte Hornets organization released a statement indicating they were reviewing guidelines and discussing with the NBA safe options to return fans to the Spectrum Arena at a later date. 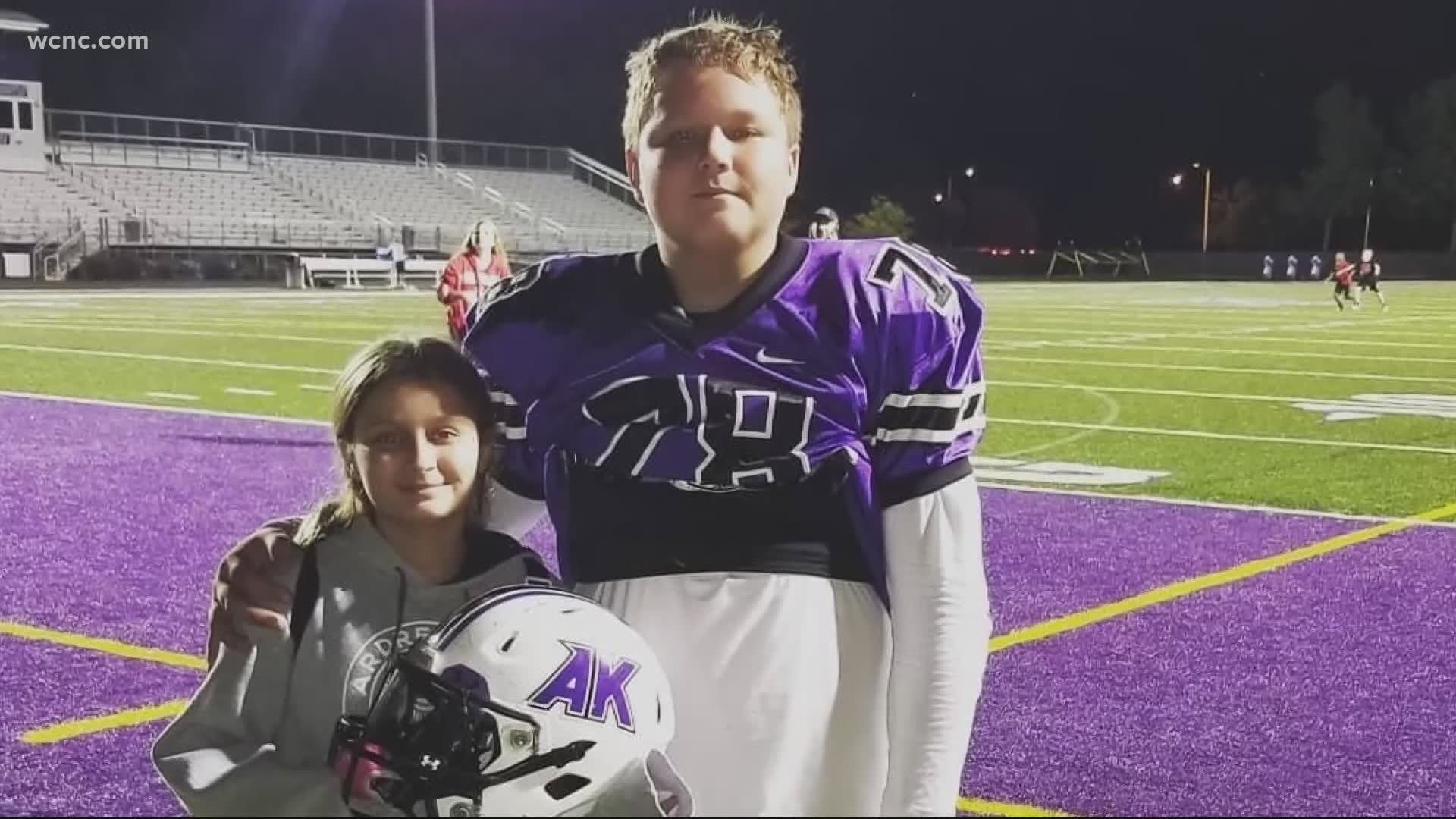 Other indoor businesses, including bars, taverns, indoor amusement parks, movie theaters, can operate at 30% capacity but not to exclude a cap of 250 people.

At bars and restaurants, the deadline to discontinue nightly alcohol sales has been extended to 11 p.m.

Jeff's Bucket Shop, which was previously licensed as a private bar, reopened last week with a new mixed beverage restaurant license after installing a kitchen to serve food.

Michaele Laria, owner and manager of Jeff's Bucket Shop, watched news conference after news conference for the last 11 and a half months. She said it was emotionally devastating to get her hopes up the bar would get to reopen, only to be let down.

"Private bars were left out in the cold, and we kept thinking and procrastinating putting that kitchen back in that it couldn't possibly go this long, and it did," Laria said.

Jeff's Bucket Shop can now open at 50% capacity under its new license. Laria said she was thrilled to welcome people back last week to start singing karaoke again, even at a safe social distance and with COVID-19 protocol.

"It was the happiest day that we've had in 11 and a half months," Laria added.

"I might not look like I'm doing the happy dance, but I am on the inside," Laria said. "I'm just, I'm in shock. I'm just in shock that it's actually happening."

Matt Wohlfarth, the owner of Dilworth Neighborhood Grille, adjusted the restaurant's business model to roll with the punches of the pandemic by filling takeout orders and spacing out the seating arrangements for COVID-19 safety protocol in the dining rooms.

Wohlfarth said the restaurant is still going, thanks to two rounds of the Paycheck Protection Program and loyal customers. He said the goal is just to stay open and not lose money.

Wohlfarth said limiting the sale of on-site alcohol consumption to 9 p.m. the last few months did put a damper on business.

"There's only so much creativity that you can do, you know, closing at 9 o'clock, so this gonna, this is gonna be a big thing," Wohlfarth said.

He added that the alcohol rules hurt his employees, especially bartenders, the most.

"They're making an OK amount per hour, but there's a lot less hours cause they used to work a nine, 10, 12-hour shift, and now it's five or six," Wohlfarth said. "So, that means you have to work more days or figure out something else to do to make money."

Wohlfarth said he had to grab a beer to watch the last state news conference and the changes that it could bring for his business.

"It was like, well, we're either going to celebrate, or we're just going to drink this beer and wait for the next time," he said.

The sign outside Dilworth Neighborhood Grille has chronicled the days of the pandemic. Wednesday's sign read, "Day #343, thank you, curfew moved back to 11 p.m.!"

"Alcohol is a bigger profit driver than the food, so we're looking forward to that," Wohlfarth said.

Other mass gathering limits, such as those at private events, increased to 25 people indoors and 50 people outdoors.

Social distancing and mask-wearing mandates continue regardless of these changes.

What led up to the decision

Earlier this week, Republicans in the North Carolina House filed a bill that would require schools to increase spectators to at least 25% of capacity for indoor and outdoor events and would allow schools the option to increase it to 50%.

Last week, Cooper said any of the current restrictions would be "on the table" to change, including occupancy limitations for businesses and the curfew.

School districts, including Charlotte Mecklenburg Schools, have been returning teachers, students, and staff to the classroom.

Tuesday night, while giving a coronavirus briefing to Mecklenburg County commissioners, Gibbie Harris, the county's health director, said it was likely Cooper would continue with his "dimmer switch" approach, the gradual increasing and decreasing of measures.

"He will lessen restrictions," Harris said. "I don't know that he's going to do away with his order."

Looking at new daily cases, percent positive, and hospitalizations as a whole, the metrics paint a picture similar to what the state was seeing back in November. They are still not on par with the most recent lows from September, but they are trending that way, an analysis by WCNC Charlotte's Vanessa Ruffes found.

In a little more than an hour, Gov. Cooper could announce loosened COVID restrictions as the state continues to see improvements in its metrics. Right now, the numbers paint a picture similar to what we were seeing around Nov. @wcnc

For example, the state's positive test rate is back down to just above 6% after peaking above 14% in January. The current rate now mirrors what North Carolina had reported in early November.

While vaccinations have been underway for about two months now in the Tar Heel State, Dr. David Priest, an infectious disease specialist with Novant Health, does not believe vaccinations are at a level high enough to make them the biggest influence on the trends.

"A lot of it has to do with increasing amounts of immunity in the population from people having (the virus), and hopefully, not gathering like they did over the holidays," Priest said. "I don't know we've vaccinated enough people for it to be the main driver of decline."

Have a relative or friend in another state and want to know when they can get vaccinated? Visit NBC News' Plan Your Vaccine site to find out about each state's vaccine rollout plan.

According to the North Carolina Department of Health and Human Services COVID-19 dashboard, 805,609 people statewide have received both doses of the vaccines. That is roughly 8% of the state's population.

Based on case counts from NCDHHS, at least 849,630 people in the state have had the virus, which is just about 8% of the population as well.

How far are we from herd immunity?

While there is still much to learn about how much those two groups of vaccinated and infected people overlap, how much COVID-19 cases are going undetected, length of immunity, and how variants might play into it, the immunity estimates noted above show the population that still has a ways to go before reaching herd immunity.

The Centers for Disease Control and Prevention said it is researching what the threshold for coronavirus herd immunity is, but many health experts believe it is likely upwards of 70%.

Health officials have pointed to the importance of vaccinations in reaching herd immunity, as opposed to lifting restrictions completely and letting immunity happen through infection.

Last year, the World Health Organization said encouraging herd immunity through infection was "unethical." Some experts warn it could lead to overrun hospitals, even more avoidable deaths, and a further damaged economy as the workforce is ravaged by the virus.